Why is Mozart so great

The Mozart Week has been one of the finest composer festivals in Salzburg since 1956. Now the tenor Rolando Villazón has taken over the director's scepter and is throwing ideas around. A report from the city of Mozart.

Memory. The finger wanders uncertainly over the box. Event follows event in the booklet, many of them mysteriously titled. Then you have to look up what that is. Ah, you already had it - check. The program of the Mozart Week is extensive and inviting. After all, the whole city of Salzburg should celebrate their son Wolfgang Amadeus Mozart! This is how the new artistic director Rolando Villazón put it himself. Why actually? Isn't it penetrating enough how this one composer jumps in the eyes of visitors to Salzburg, rubs under the nose, blows in the ears and is placed as a ball on the tongue? Perhaps that is precisely why Villazón's request is all the more important. And to infer his abilities as artistic director from the tastefully questionable “Feliz Navidad” album by the Mexican tenor or his vocal flight as Papageno in Baden-Baden would be premature and unjust.

Fortunately, the printed program memory is much clearer than the festival website: Chamber concerts, puppet theater, master classes, shadow plays, symphony concerts, cabaret, music theater, film screenings, and even a mariachi band, with Villazón singing in the sombrero in front of Mozart's birthplace, is not missing . But when classical music is performed here, it is composed exclusively by Wolfgang Amadeus Mozart. The premise: to shed light on what is considered essential from all sides. He and his team do not shy away from experiments.

The festival starts in the Felsenreitschule with the lavishly designed musical theater "T.H.A.M.O.S.", a play for which Mozart wrote stage music at the time. The story: After a coup, Pharaoh Menes goes into hiding under a false name among friars. His political adversary has died and his son Thamos has now been involuntarily elevated to the throne. He is in a relationship with Tharsis, the daughter of the old Pharaoh and wishes to dedicate his life to science instead of power over others. When the traitors Pheron and Mirza plan a conspiracy against Thamos, Pharaoh Menes intervenes, accepts the rival's son as his son-in-law, and everyone gets what they deserve.

The Catalan director Carlus Padrissa embeds ancient Egypt in a shrill dystopia. Mozart's music remains unchanged, as does the storyline. This is accompanied by individual arias, including from the “Magic Flute” and “Zaide” and the overture to his E-flat major symphony.
Tenor Nutthaporn Thammathi (Thamos) and soprano Fatma Said (Tharsis) improvise the spoken text of their roles in their native languages ​​Thai and Arabic in a bombastic laser pyramid. They are accompanied by specially built music machines that Tonkünstler Urbez Capablo feeds with algorithms in the orchestra pit. Vocally, the soloists work incredibly precisely, but unfortunately cannot quite assert themselves against the sound wall of the robots. A huge all-seeing eye blesses the lovers with their tears - lucky that they were wrapped in golden rain capes beforehand! The traitors Pheros and Mirza fight their way through the royal guards with their daring gymnastic and trapeze inserts, including pyrotechnics. René Pape (Menes) belts out Sarastro's arias from the Magic Flute with aloof authority.

The staging puffs up like cotton candy on a stick. All of this is not necessarily provocative at the start of the festival, but it is courageous and leads to divided views among the public and the press. But what about Rolando Villazón's explicit intention to bring the “theater to the people, not the people into the theater” and to draw an audience as a matter of course? Mozart, cleverly interpreted in a deliberately funky setting that gives his music the necessary space - such an entertaining performance would be something for young people. Instead: Obviously wealthy old men lead women in brocade dresses under hooks. Young people who are not primarily interested in being seen by attending the event can be counted on one hand. Perhaps a larger portion of courage would have been necessary: ​​Offer the T.H.A.M.O.S. premiere at a greatly reduced price. A 90 euro ticket is still in the lower price range here, which certainly does justice to the effort involved in the staging. Nevertheless, there would certainly have been opportunities to reduce the prices at the many other concerts, for example, in order to lower the entry barrier here. Because what is currently on offer in Salzburg is something that Mozart fans definitely cannot miss.

niusic: What attracted you to Mozart Week?

Alondra de la Parra: Rolando Villazón is really extremely well known in our common homeland of Mexico. I was lucky enough to meet him a long time ago. He had promised to support me wherever he could because he appreciated my work so much, and then the invitation to Mozart Week came. So there was no question of coming here for me!

niusic: T.H.A.M.O.S. Pretty full of ideas. Does Mozart miss out on this?

de la Parra: No, absolutely not. His music is strong enough to assert itself and, if necessary, to shoot back if it is narrowed down. Nonetheless, when I was designing the piece, I always got in touch whenever I had the feeling that we might stray from the essentials. (laughs) I would like to emphasize: Mozart's music was not shaken!

niusic: That sounds like a strong personal bond with Mozart ...

de la Parra: Yes, he means a lot to me! A lot of musicians say that, because you can't get past Mozart, but it's a little different with me. Mozart's music only ever appears in special moments in my life: The first piece that I practiced on the piano - the “Turkish March”; the first piece I sang in a choir when I was 15 - the C minor Mass; the first concert at which I conducted from the piano - the piano concerto in A major KV 488. And now the first great musical theater on a big stage. I never go to Mozart for a concert! He comes back into my life all by himself in important moments.

niusic: How much were you allowed to have a say in the production?

de la Parra: That was a fair division of labor. I shared my principles and they followed them. That's why I was able to give everything away first. In the first rehearsals I was passive and just made sure that the piece got its music. Later it was practically my rehearsals, and I was able to optimize the staging for myself and the orchestra.

niusic: Are we excluding the topic of “female conductors”?

niusic: If there was a musical problem with the performance, it was the timing ...

de la Parra: It's just difficult! What we did there isn't the Magic Flute, it's something new. It starts with the choice of tempos, which is not easy because something is constantly being built around the pieces in the staging. I have to watch the video first, then I'll get an idea of ​​it. There are already a few points that I would like to work on; nothing will be done before the fourth or fifth performance.

niusic: How do you come to terms with the musical robots?

de la Parra: When the director told me, "You have to work with robots", I was very skeptical at first. But they helped us a lot with the transitions between individual pieces, for example. And the idea of ​​having the soloists improvise over the algorithmic music in their own language is great. The machines just have to play quieter next time. They were too loud compared to the orchestra.

niusic: How would you describe the acoustics of the Felsenreitschule?

de la Parra: When you see the stage, you think “It's going to be terrible, you can't play Mozart here! A huge room and the bare rock walls. ”But then it turns out, it sounds brilliant, I can't think of any other word. Except at the conductor's desk - ironically, that's where you can hear the worst, which is a bit frustrating. That's why I wandered around the room a few times to determine the sound.

It's a nerdy event to which some Mozarteum students also show up: violinist Renaud Capuçon and pianist Alexander Lonquich offer the contrast to "T.H.A.M.O.S.". Her concert with two violin sonatas, the variations on the song "Au bord d`une fontaine" and those on "La bergère Célimène" is pure understatement. Rarely do you see such great artists so humble on stage. In astonishingly precise interplay, they dissect the details of Mozart's compositions with delicate ease. Music lovers on and in front of the stage - again and again the two are clapped out, conjure up an adagio as an encore. The visitors talk lively after the concert, and one of them literally comes to the conclusion “Even as a Salzburg citizen, you should buy a ticket here, despite the high prices. There is no better way to celebrate Mozart! ”A big point for Rolando Villazón and the Mozart Week, whose program for 2020 has already been set. 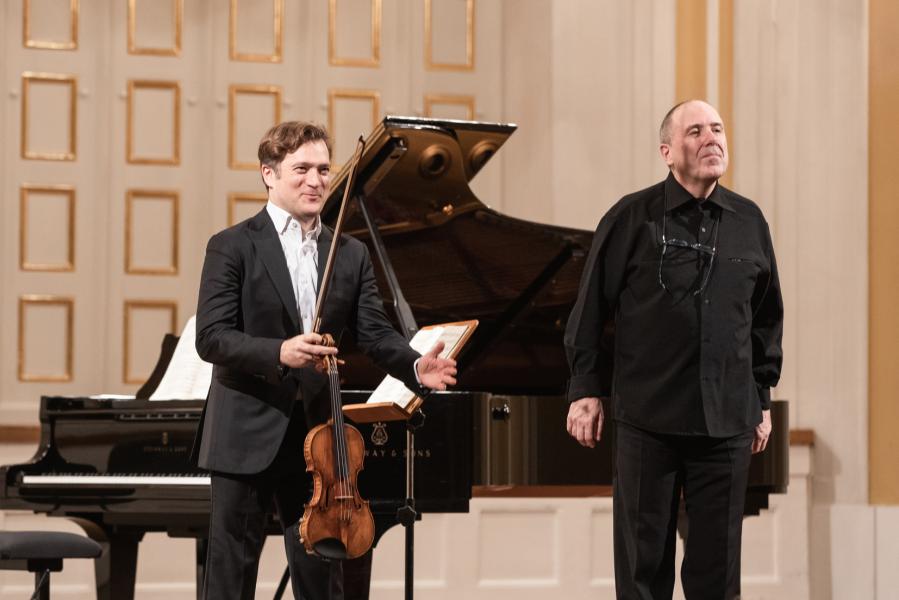