What are the bad things about Darjeeling

Friday, May 18, 2018 // Finally, after a long journey, I have arrived in Darjeeling. The small town is located at 2000 meters on the Himalayas in the north of the Indian state West Bengal, in the tip between Nepal and Bhutan, almost on the border with Sikkim. The evening before I had flown from Hong Kong to Delhi, the flight was delayed over three hours and so I was only at the hotel after one o'clock in the morning. I noticed the high military presence at the airports, including roadblocks. In front of the hotel, people looked into the hood of the car, probably to check for car bombs? In the morning I flew to Bagdogra to take a taxi to Darjeeling. Shortly after Bagdogra we drove through a barracks village of the Indian army, then, on the way to Darjeeling, through tea plantations in the lowlands (almost 200 meters above sea level), which belong to the Dooars area. Quite abruptly, the landscape changes from flat land to steeply sloping terrain, where the first Darjeeling tea gardens are located, which extend from here to the border with Sikkim. The road winds steeply upwards, all the way to Kursong, then it meanders along the steep slopes over Ghum at over 2200 meters to Darjeeling. The street is very narrow, there was a lot of traffic and traffic jams, the same thing in the narrow streets of Darjeeling - and it will always be like this during my entire stay here. 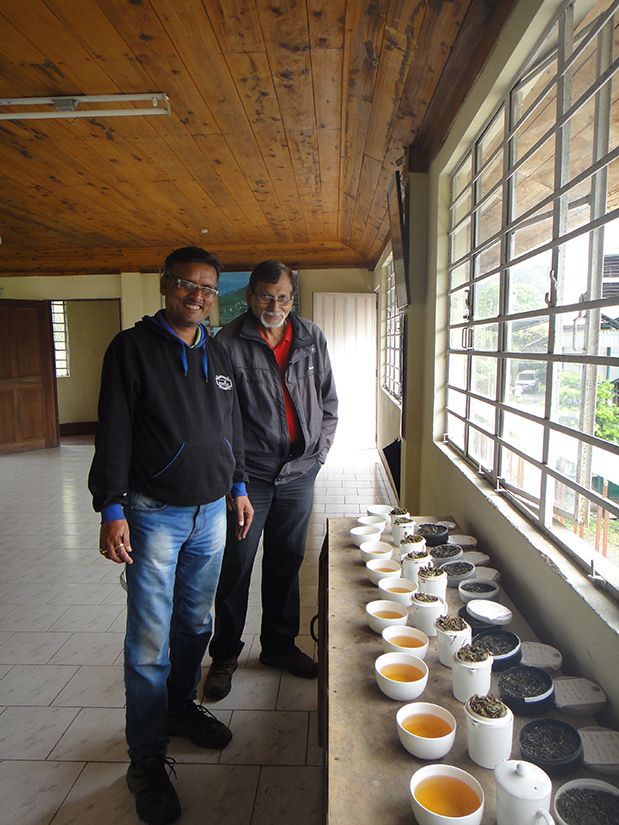 Saturday, May 19, 2018 // Our friend in supplier Mahesh Sharma, who comes from Assam and has lived in Switzerland for decades, has organized various tea garden visits for me. I should take a taxi from my hotel in Darjeeling to the tea factories around Darjeeling, some of which are several hours' drive away on narrow roads or poor field / forest paths. The first visit was the Tea Estate Singtom. The day before, I contacted the person in charge, Mr. Pal, and organized a taxi. I immediately agreed with the driver that he would drive me around for the next few days, for a fee, of course. In the tea factory, which processes all the leaves of the Singtom and Steinthal tea gardens, the first thing we did was a large tea tasting, what else? Here, of course, in the Indian-European style, i.e. an infusion with the normal degusets and with a spittoon (tea merchants taste tea, do not drink...). There were various invoices from the last first flushes from Singtom and Steinthal Gardens, all from last week. Later we did a tour of the Tea Estate Singtom (or parts of it). A lot of cut back tea bushes, not too densely planted, again and again with large trees in between to protect against the sun and with a lot of weeds, ferns and mosses; all on very steep slopes. Back at the tea factory we looked at them. On the upper floor is the "Withering Floor", here the fresh leaves are laid out to wither, which are then rolled the next morning at 4 o'clock in order to oxidize afterwards (or without oxidation time for first flush, which only takes 15-20 minutes start to oxidize). After drying, the leaves are put into the sorting machines to sort the teas according to leaf grade. The rolling machines (they are much larger than those in China) are now, shortly after noon, down, as are the drying machines. But the sorting machines are running, including the noise. After a late lunch at the Tea Estate resort, I was finally driven back to Darjeeling. 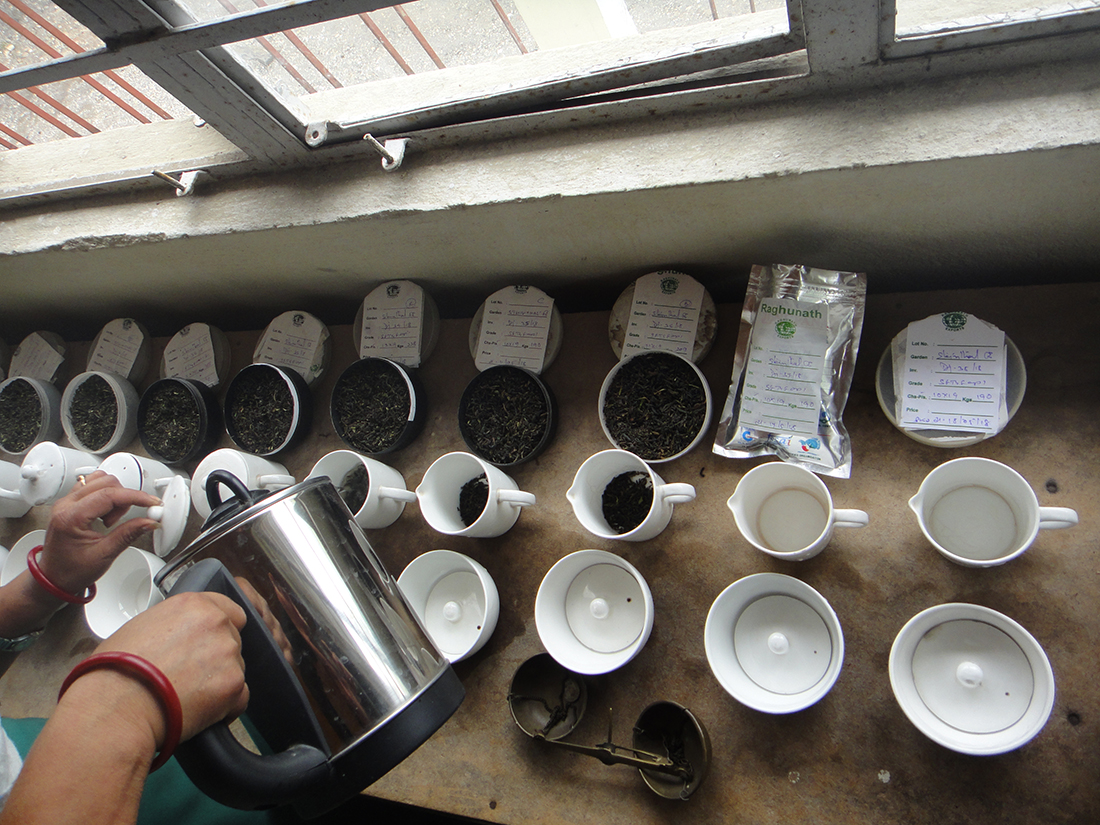 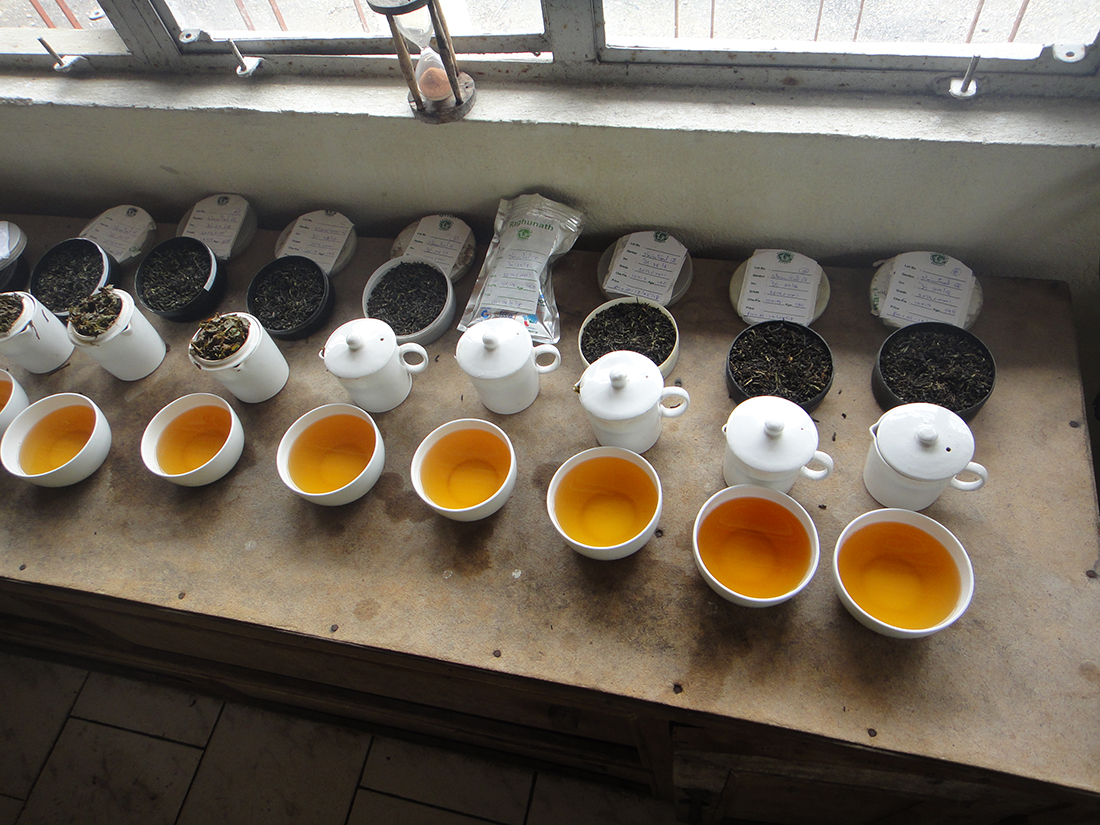 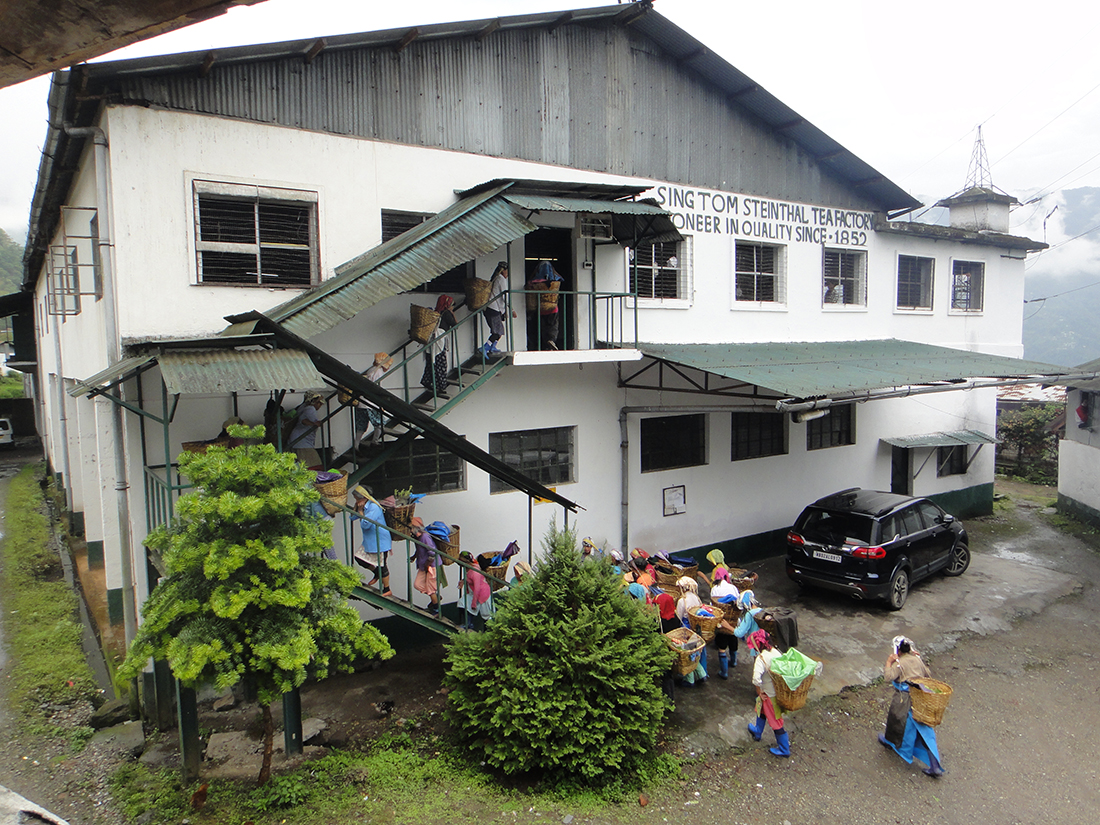 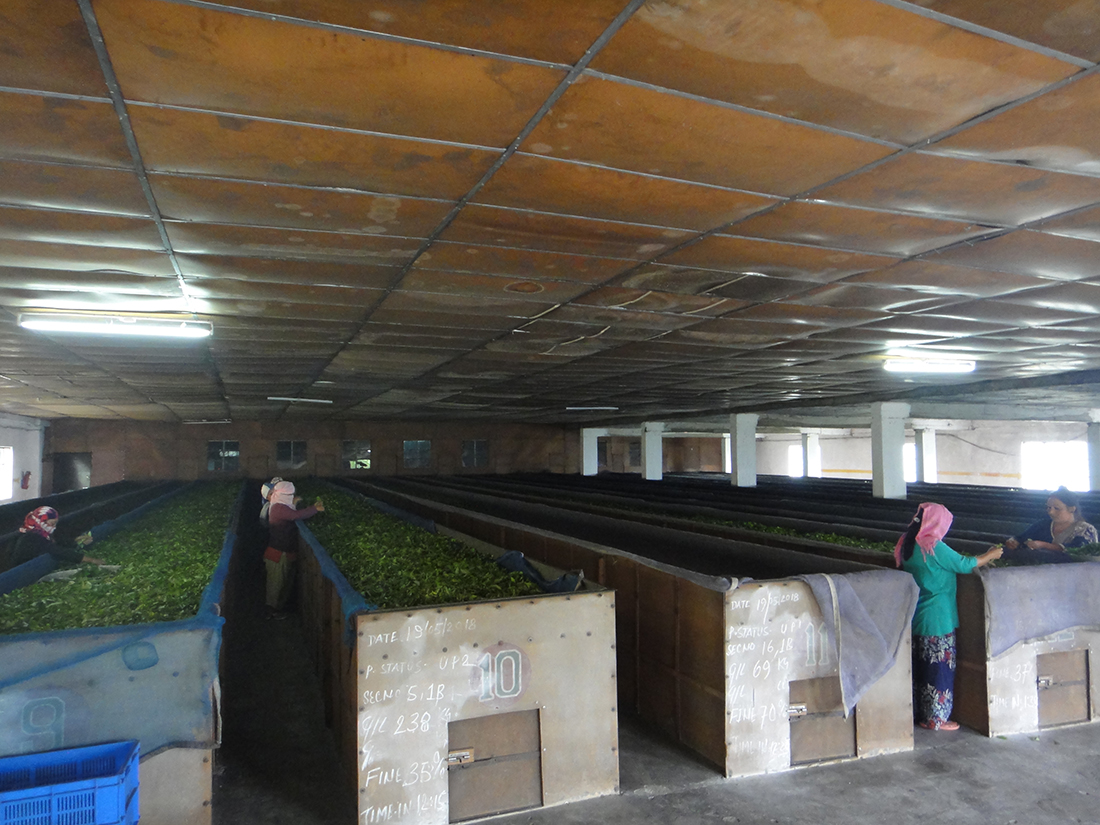 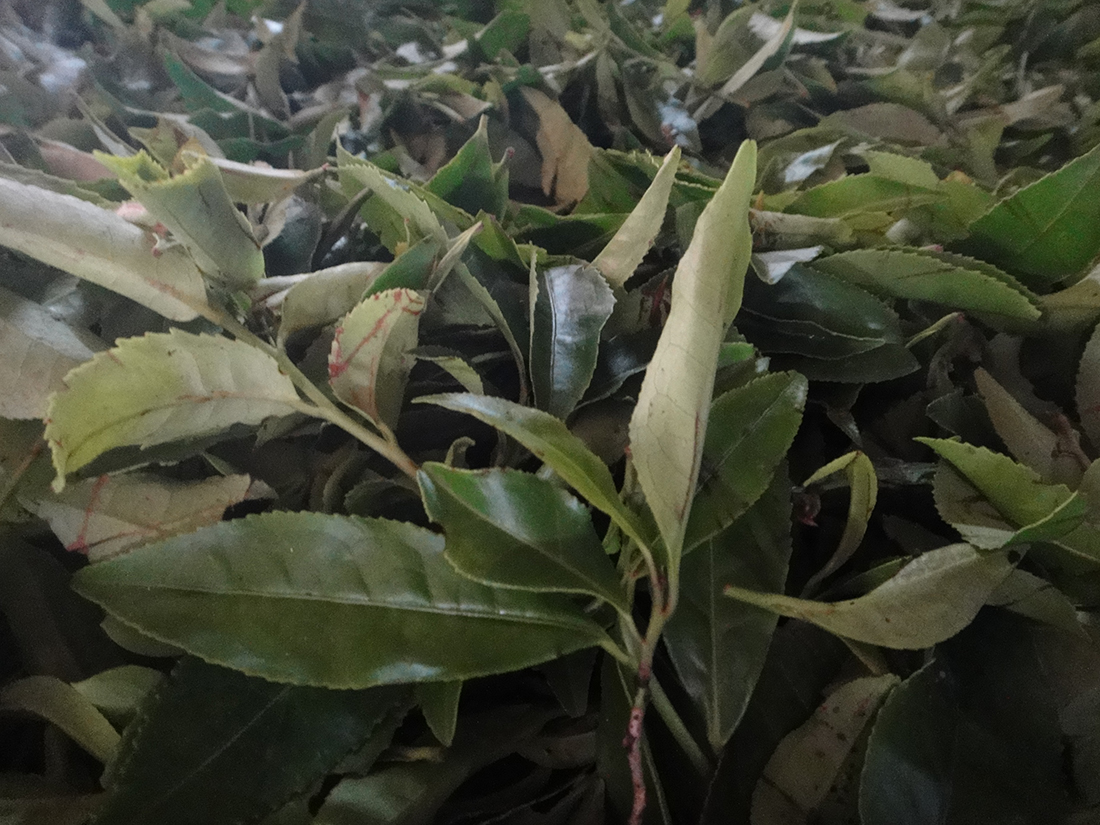 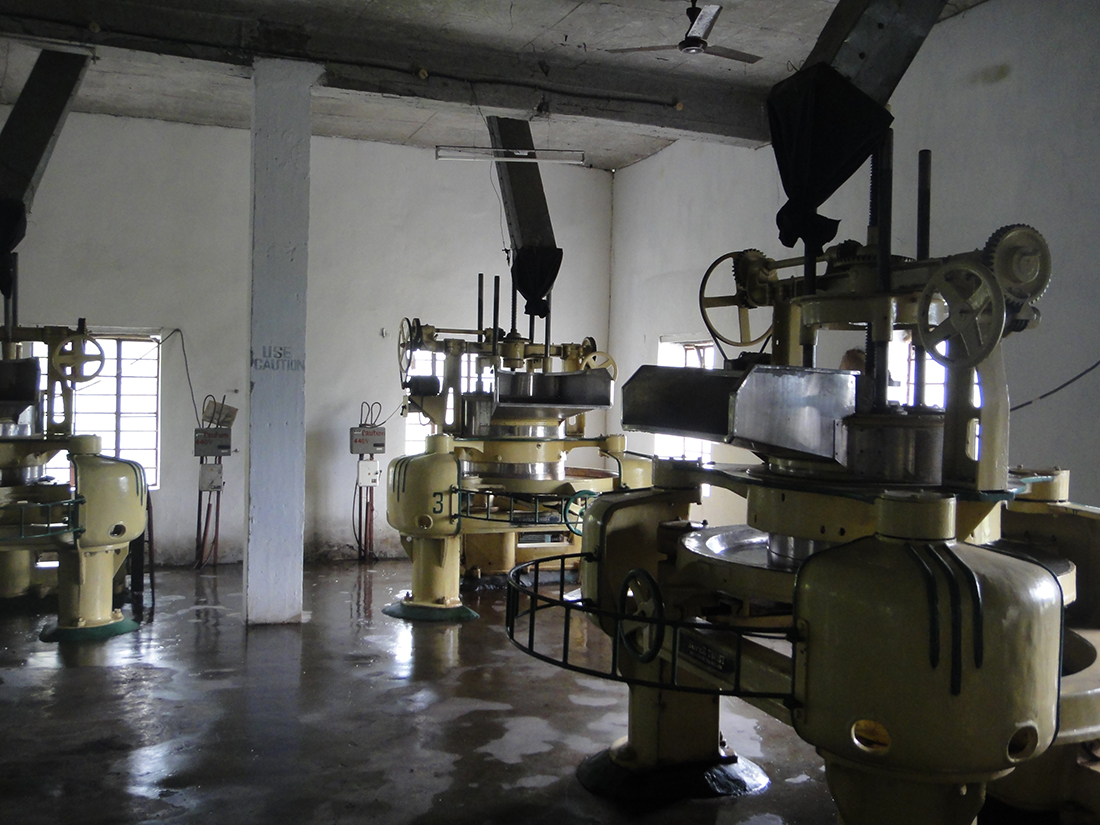 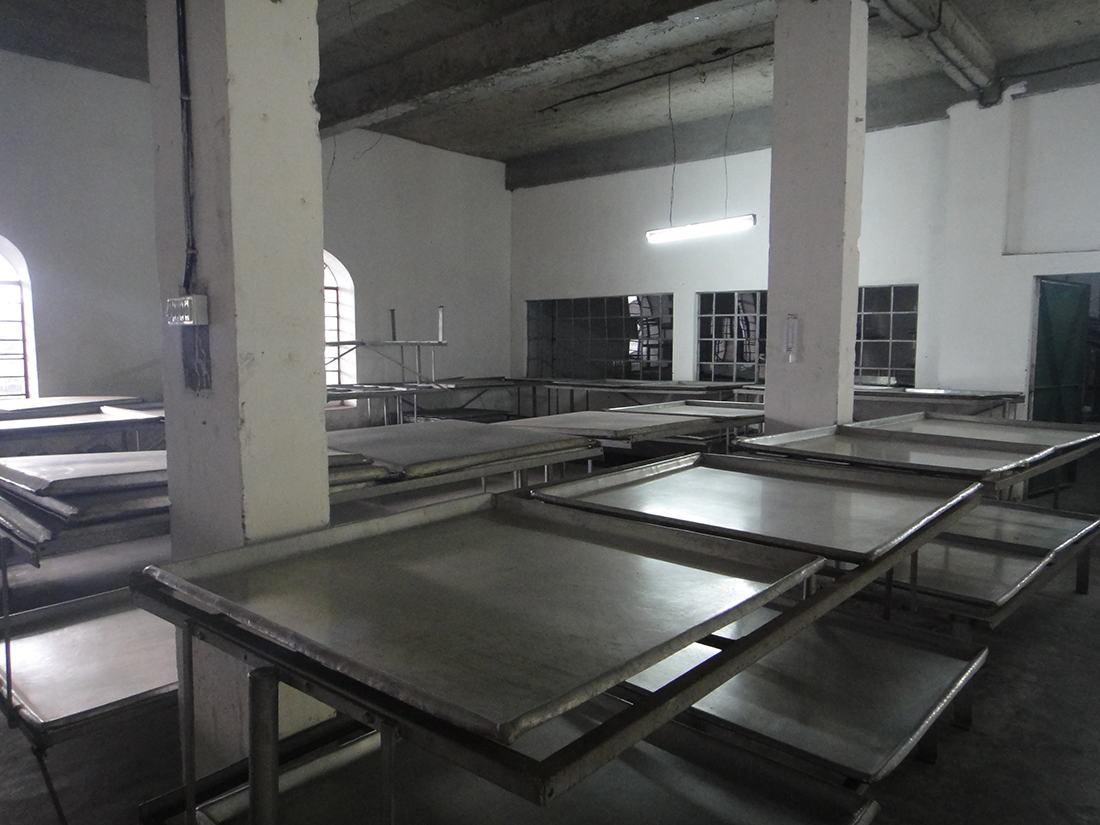 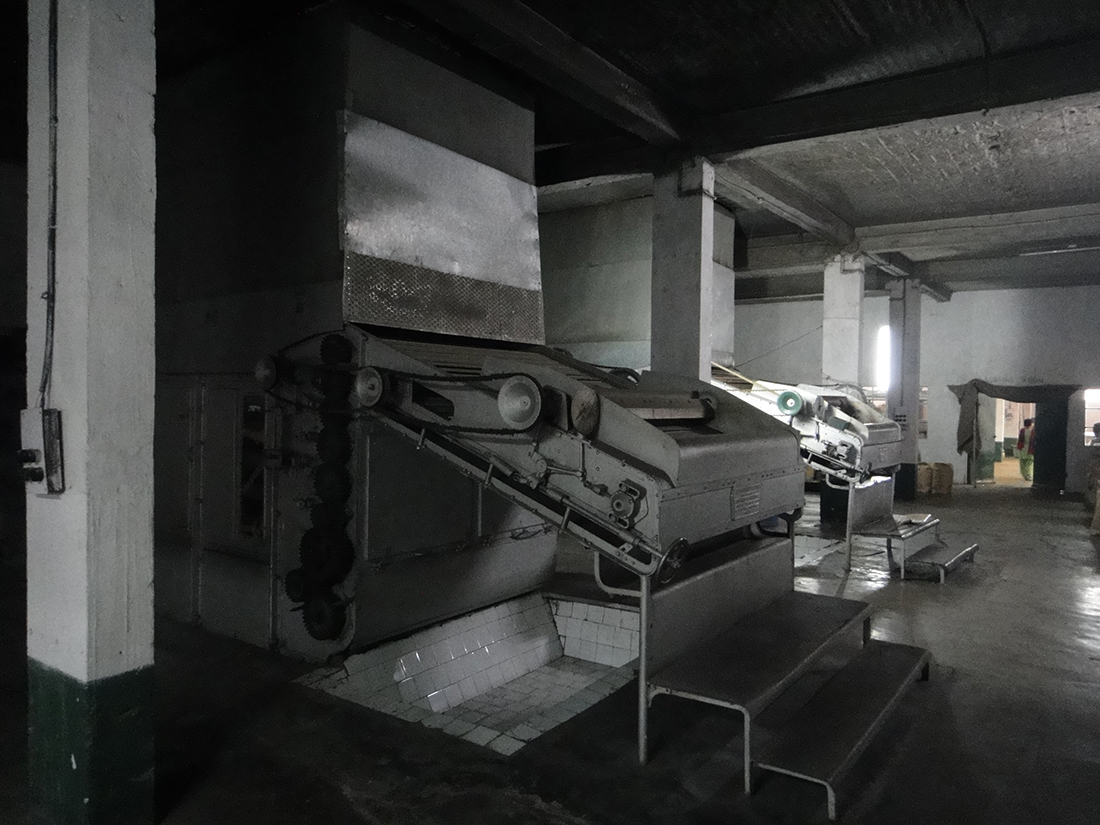 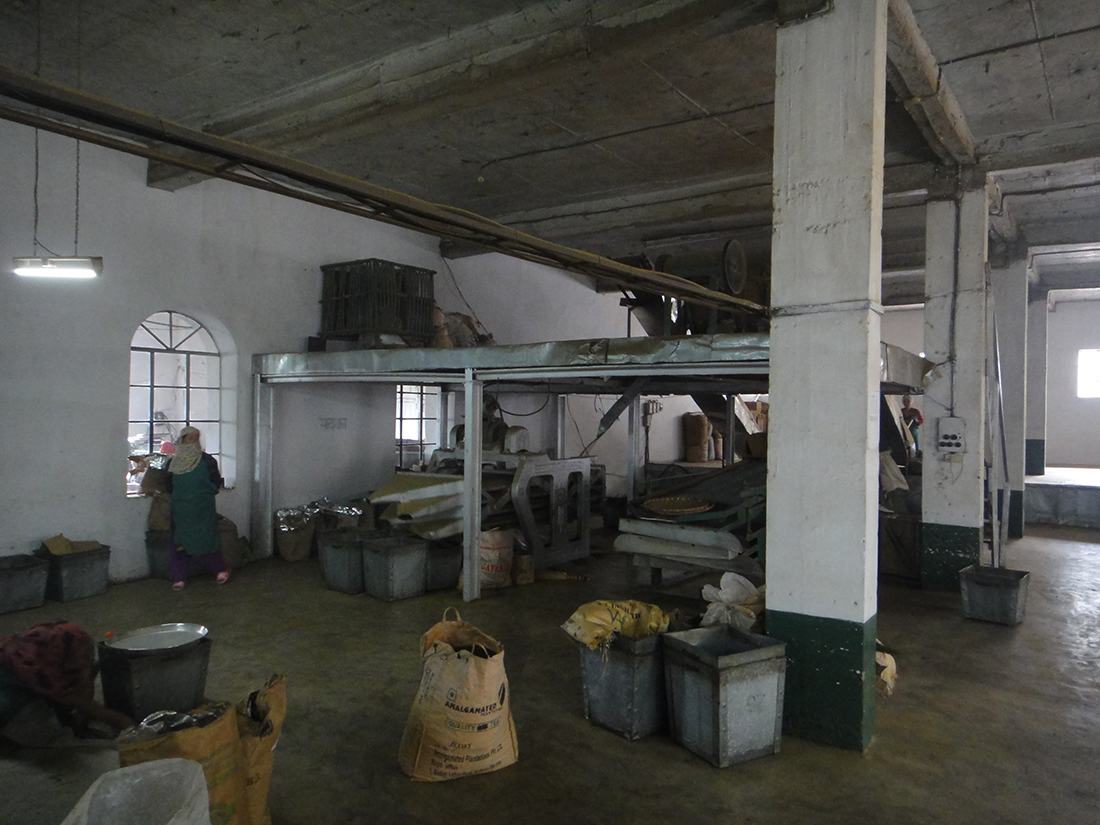 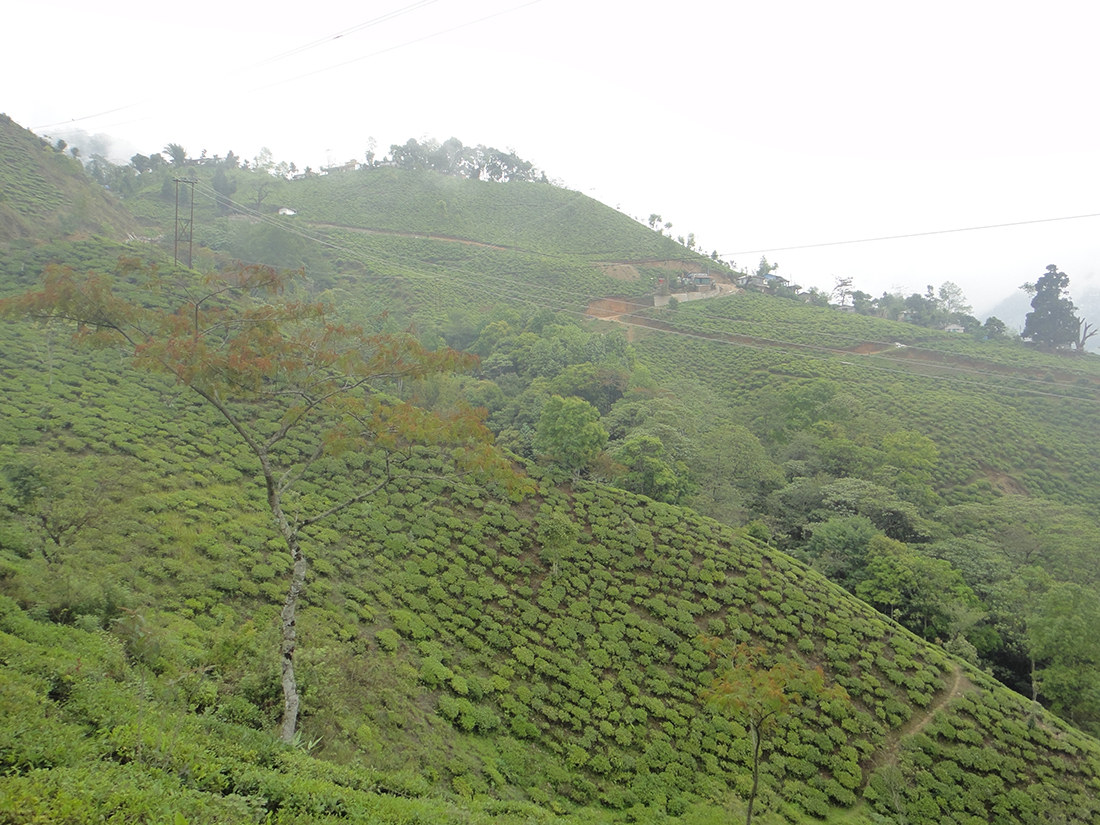 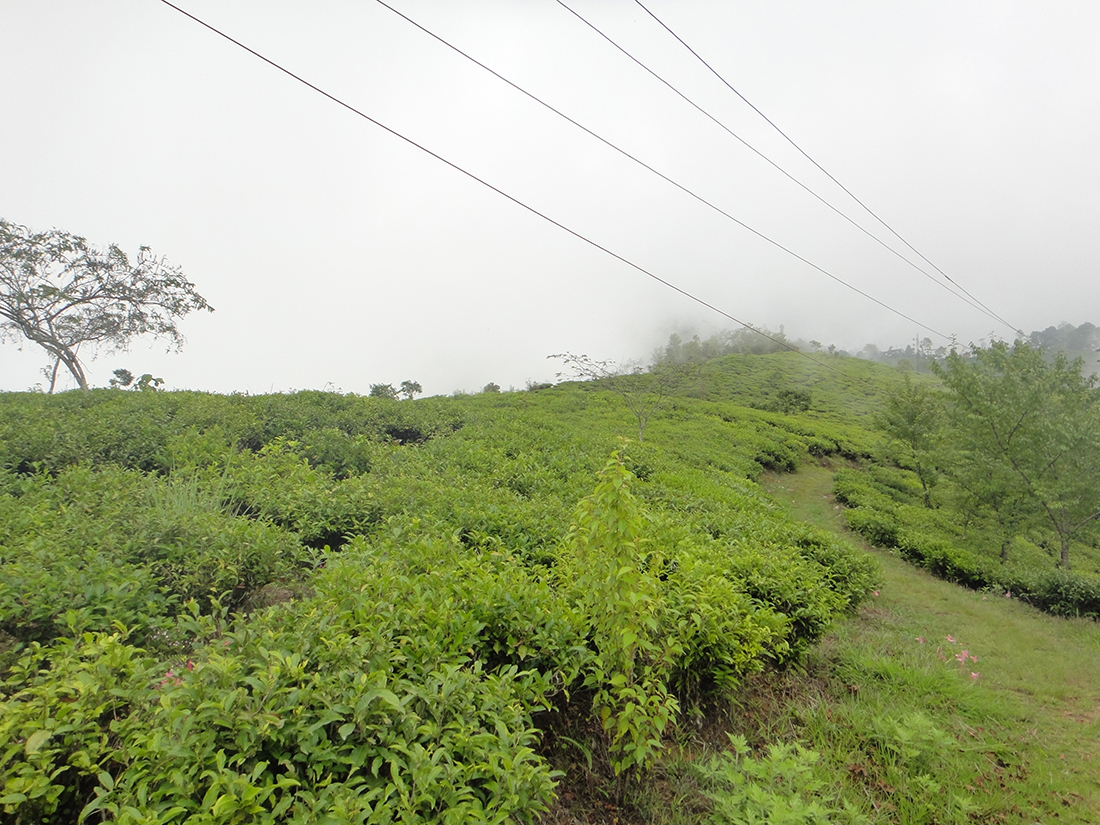 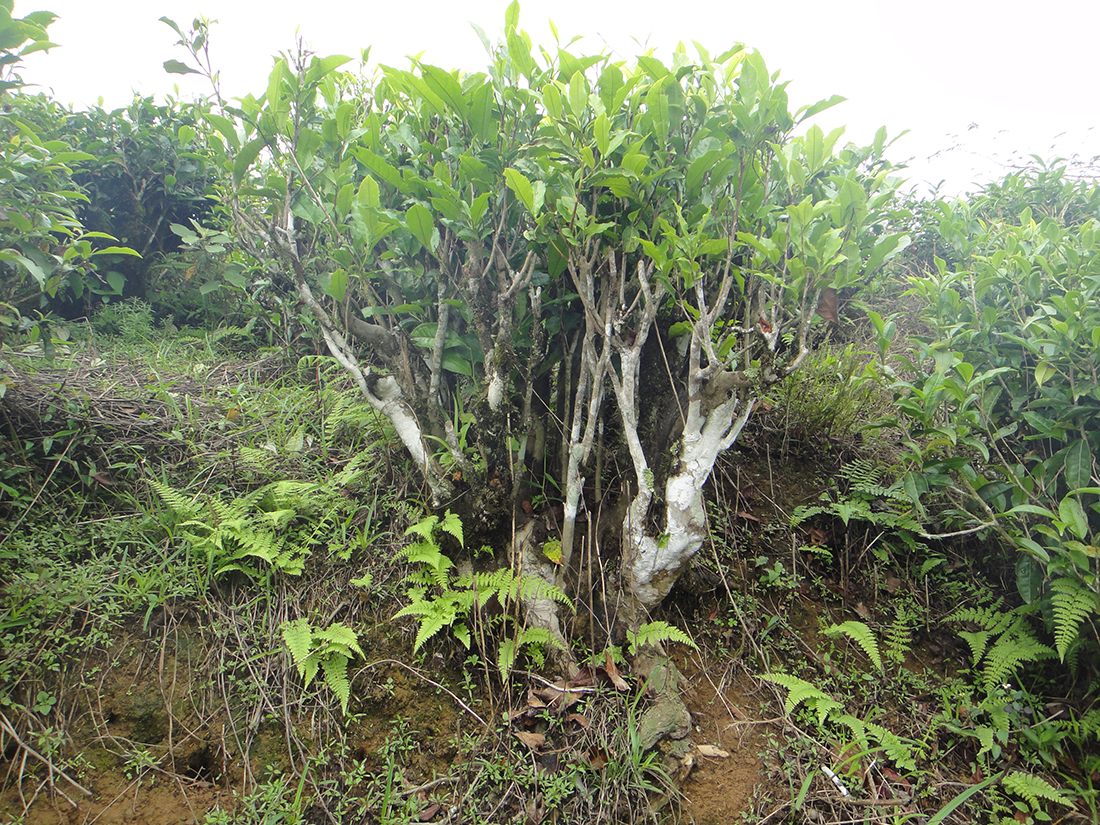 Sunday, May 20, 2018 // A visit to the Tea Estate Teesta Valley was planned for this day. This is near Kalimpong and can be reached from Darjeeling in about two hours, the way from the main road to Teesta Valley leads over poor forest and field paths through the tea gardens Tukdah, Rangli Rangliot, Namring and Gielle. Here I was received by the manager responsible for the Teesta Valley tea factory, Mr. Rajpoot. He has been here for a year after having been at Tea Estate Phuguri for over 8 years. He is very keen to experiment and tries to make different teas, so this week three invoices as Oolong. Although in Darjeeling, or in India in general, the perception is different from that in China. While the leaves are shaken there so that PARTS of the leaf structure are destroyed and thus PARTS of the leaves - especially the edges - oxidize and the leaf material is fired after oxidizing, the leaves are rolled, oxidized and then dried. Strictly speaking, they are not oolong, but black teas - the processing difference to Darjeeling black teas is only in nuances (picking material, wilting time, type or pressure when rolling, oxidation time), but actually it's the same process. In addition to the three “Oolong”, we tasted two of the first second flush, the first of the season is not quite balanced, a bit thin, the second sample already has real muscatel notes. We discussed the processing, I explained the Chinese way and gave tips for further experimentation, and then makeshiftly prepared one of the oolong in the Chinese Gongfucha with a deguset - they didn't know that and were very enthusiastic about all the flavors from their tea are to be extracted. After a short walk through the tea plants, the visit was over and I drove back to Darjeeling (without lunch). 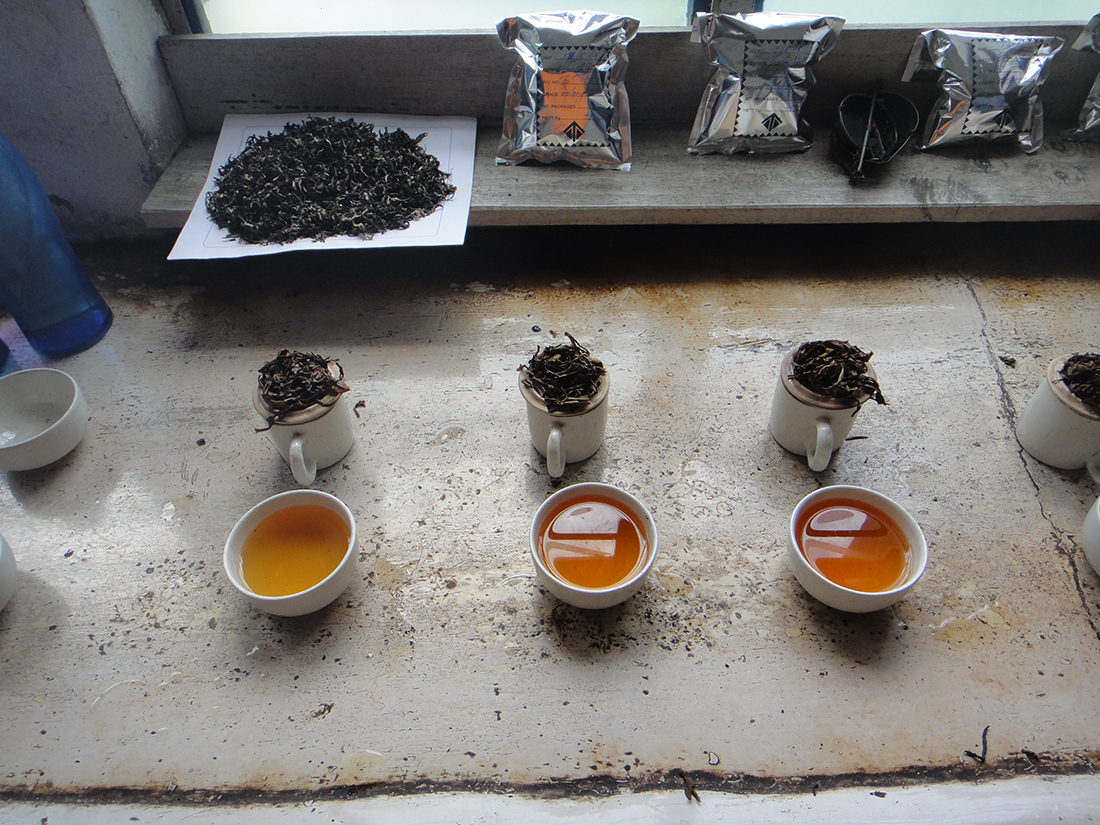 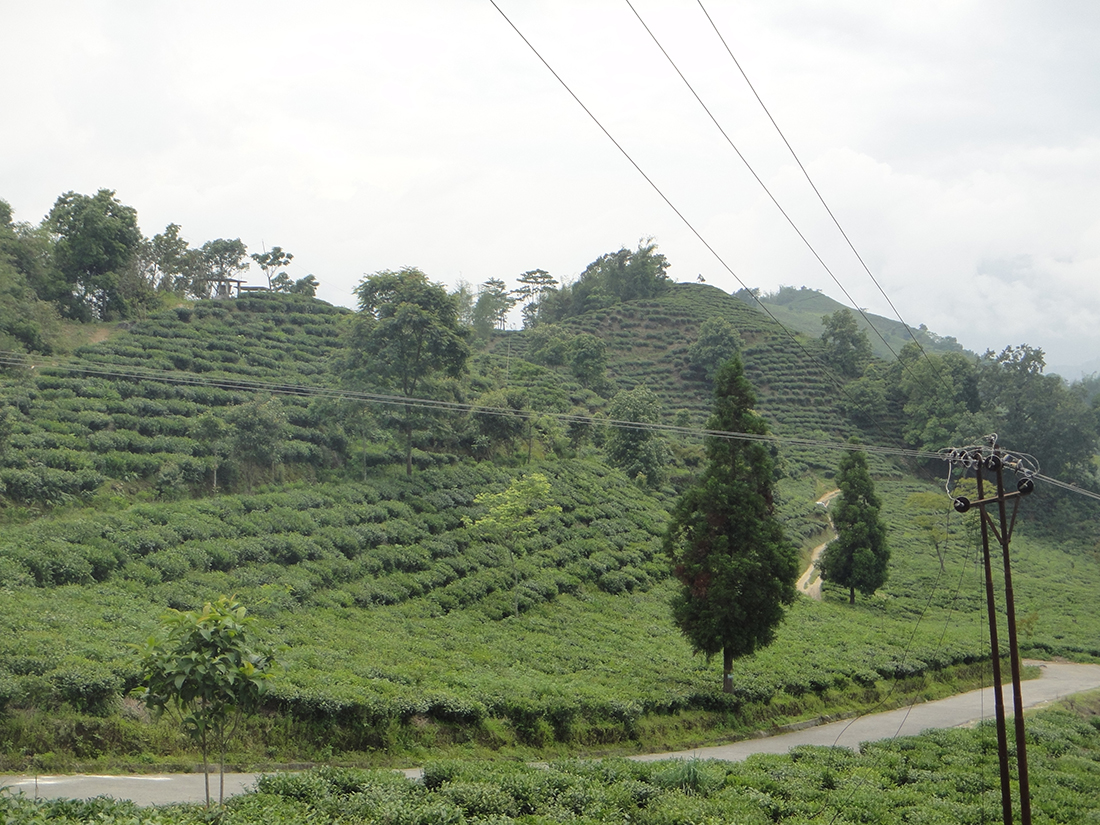 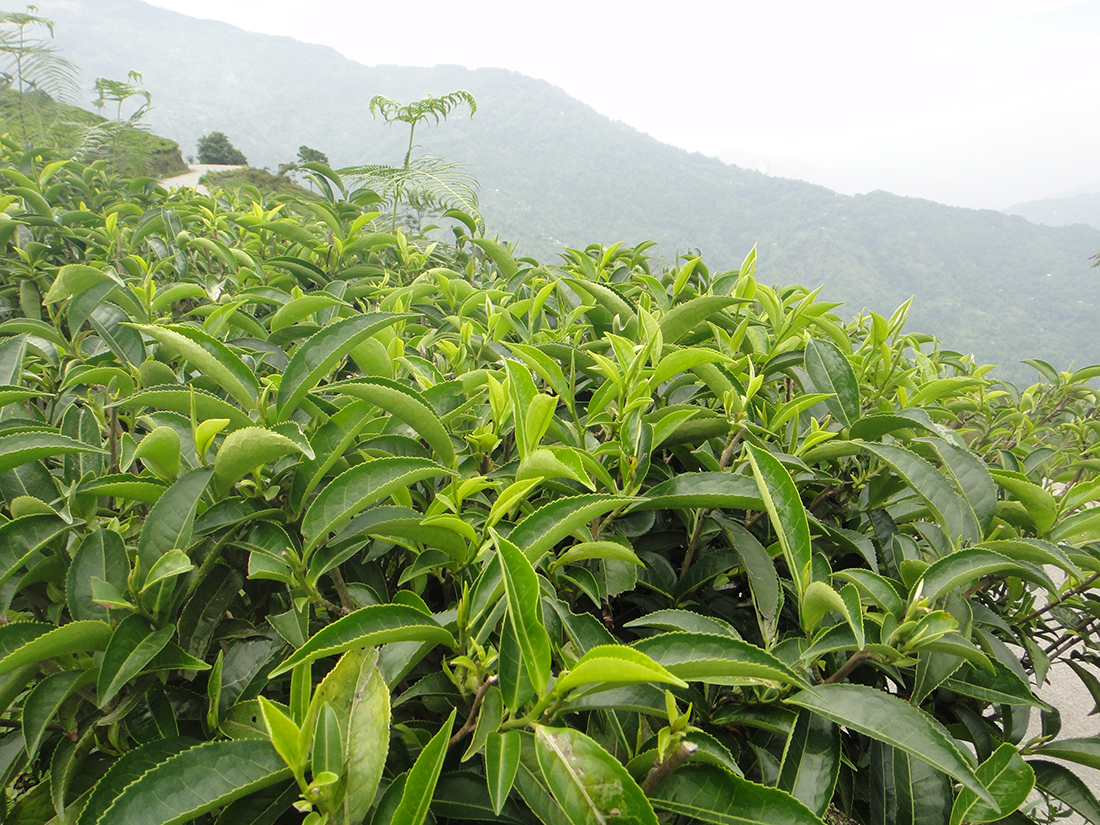 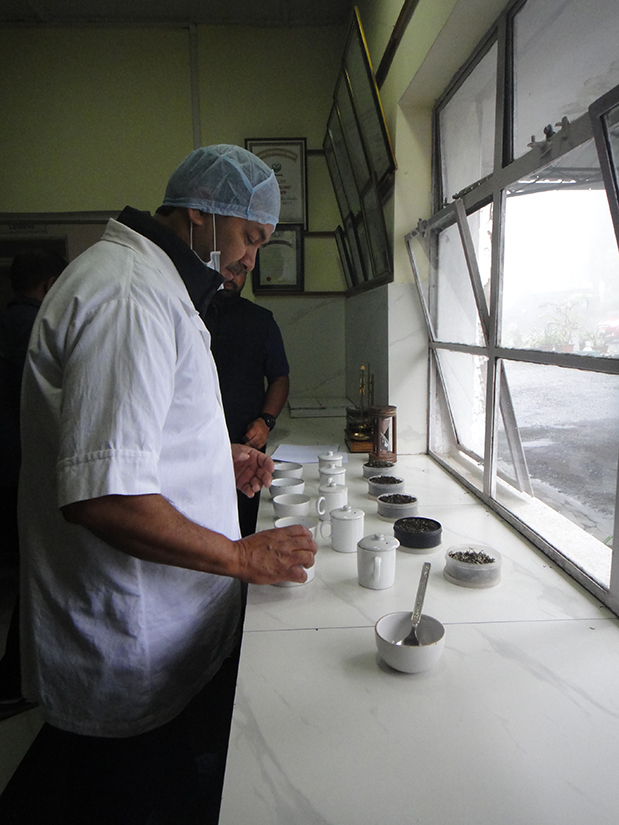 Monday, May 21, 2018 // Things are starting to repeat themselves, so for today only briefly: again a nearly two-hour drive, another tea tasting - this time the first First Flush of this year DJ1, some mid-season teas from the last few days between First and a second flush and a moonlight, a kind of white tea (which is processed in the same way as the black teas in the same way as the oolong from the previous day, the difference is in the nuances and in the small amount) - then an Indian lunch in the bungalow belonging to the company, then the Visit to the Tea Estate. This time I was at the Tea Estate Castleton belowoursesong, one of the best tea gardens in Darjeeling, famous for its second flush with muscatel notes. According to the manager in charge, Mr. Gajmer, this taste comes from the tea plants themselves, but only at certain times in certain areas, so it depends on the terroir.
Perhaps at this point about the tea plant varieties in Darjeeling: all gardens plant different varieties, but the majority are the old plants grown from tea seeds, which originally came from China and were no longer bred, the local varieties, so to speak. They are called china bush, china tea or var. Sinensis. There are also various China hybrids and Assam hybrids, i.e. crosses of var. Sinensis and var. Assamica with dominance on one side or the other. More recently, so-called clonals have also been grown, new varieties that have more tips and fruity-floral notes, but less taste. So nice and fragrance, little character - the same as in China with the newer varieties ... The teas are each picked and processed separately because the different varieties react differently due to the different compositions of the ingredients, the different moisture content, etc. 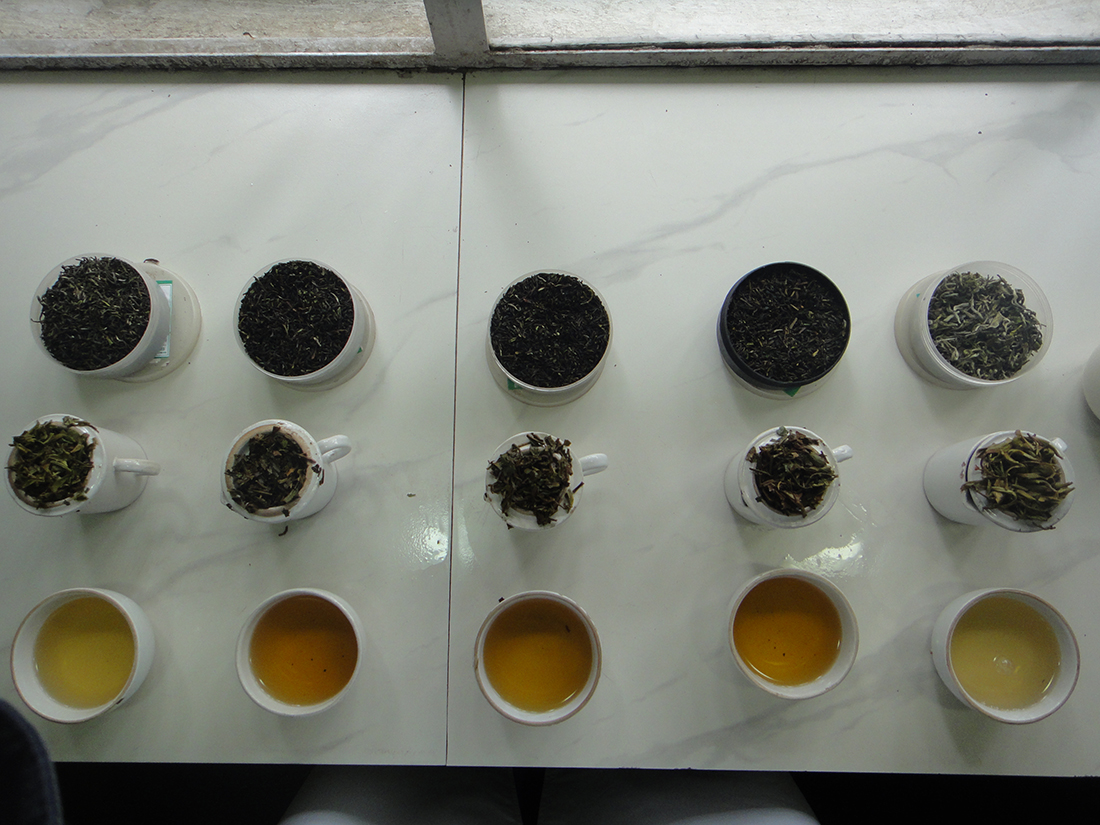 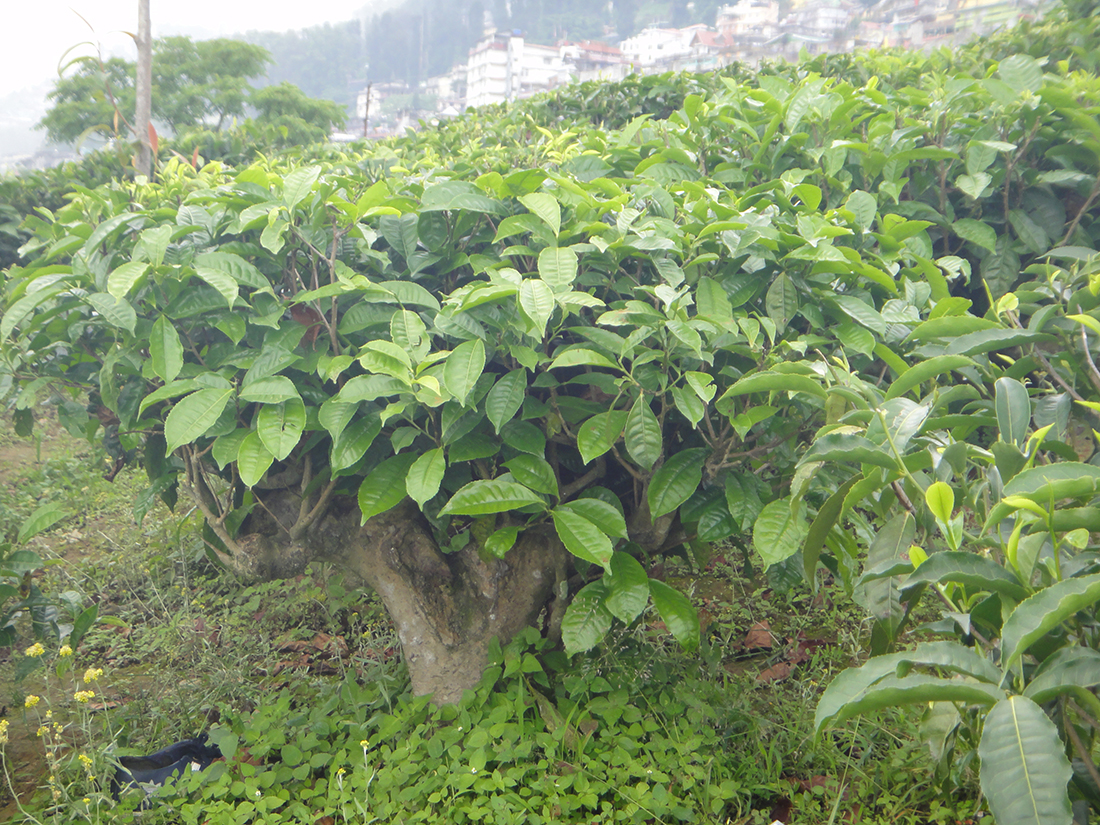 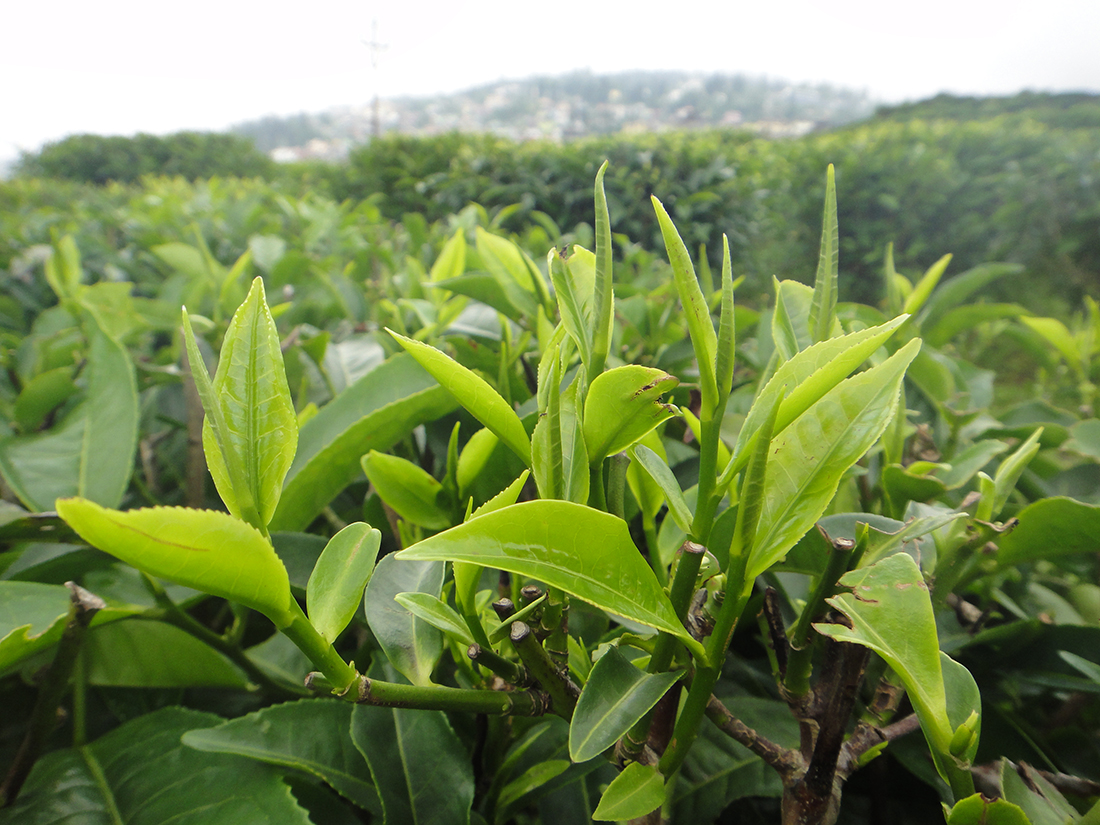 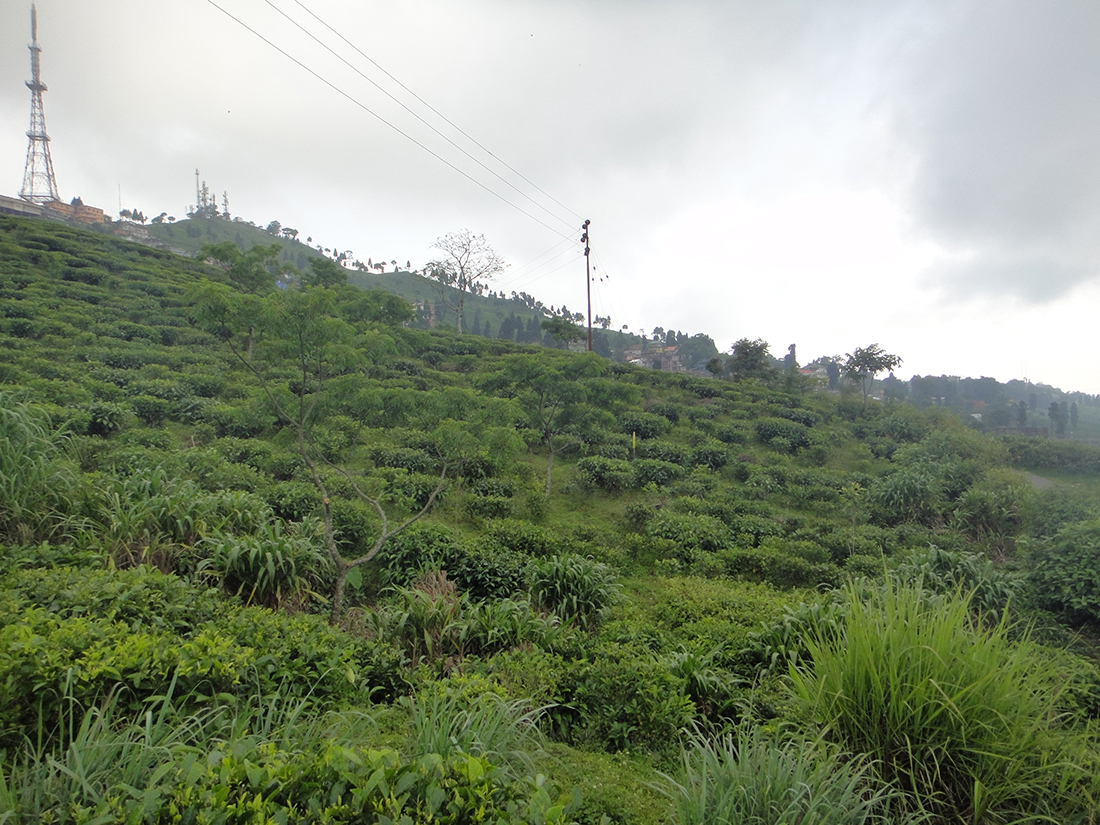 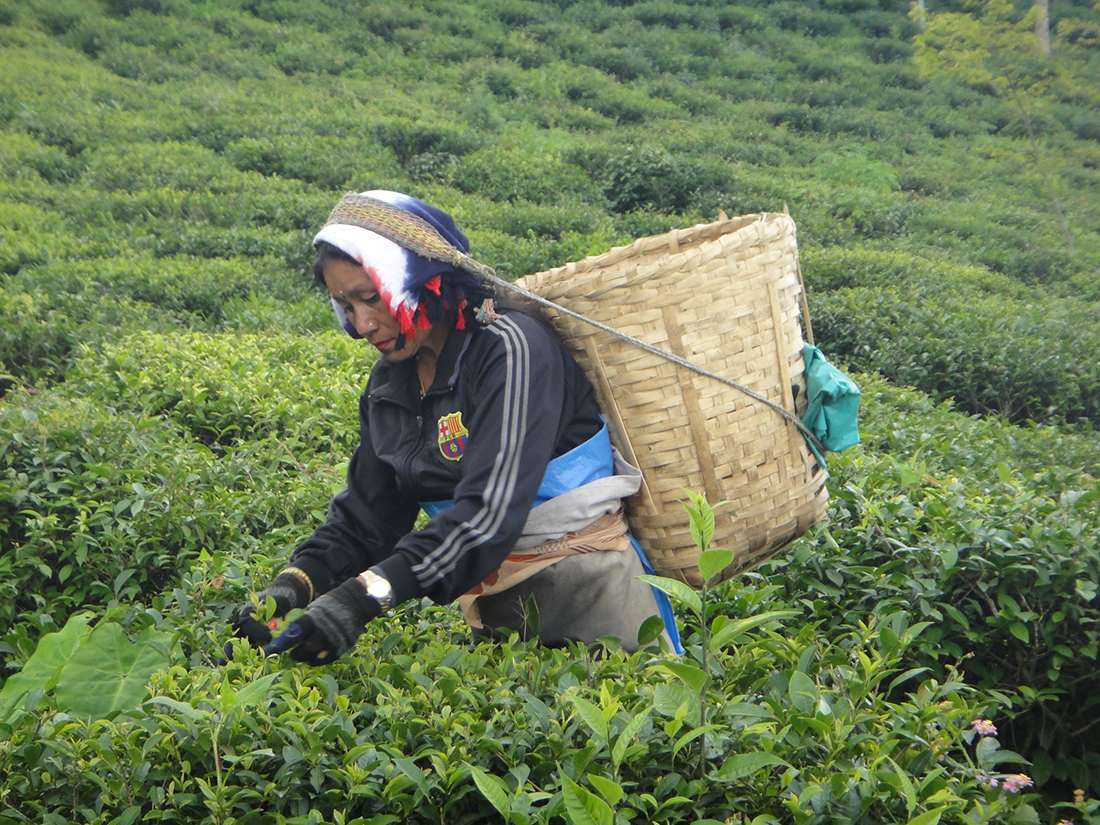 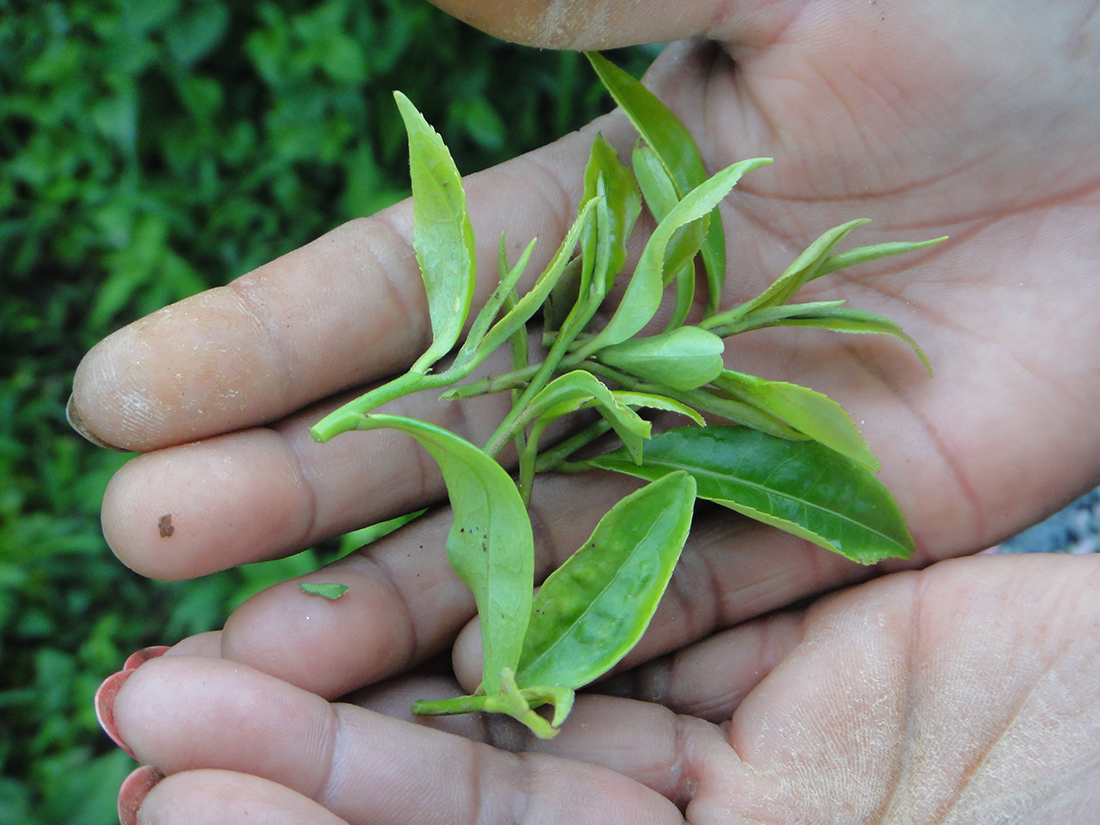 Tuesday, May 22, 2018 // My last day in Darjeeling, the last visit took me to the Tea Estate Badamtam on the border with Sikkim. Badamtam belongs to the same company as Castleton, and other gardens in Darjeeling are also part of it. In Badamtam, almost half of the tea plants are Assam plants or Assamica hybrids, a quarter are Chinese bushes and a good quarter are clonals. The Assam plants make darker, less fruity, but richer teas. In Badamtam I was received by the manager Mr. Sen, who has been working in this estate for almost 20 years. Before that he was on the plain, in Dooars. We tasted some teas from the past week, some from clonals and one from assamica, the last of the first flush. The harvest of the second flush will begin in about 10 days. In the tea factory the same picture as elsewhere, but here additionally with Japanese machines for green tea, Sencha from Darjeeling? Later we sat chatting on the veranda of the bungalow and waited over a beer for lunch, which we ate with his wife and daughter. At the end we drove briefly through the tea gardens and looked at the different types of tea bushes. 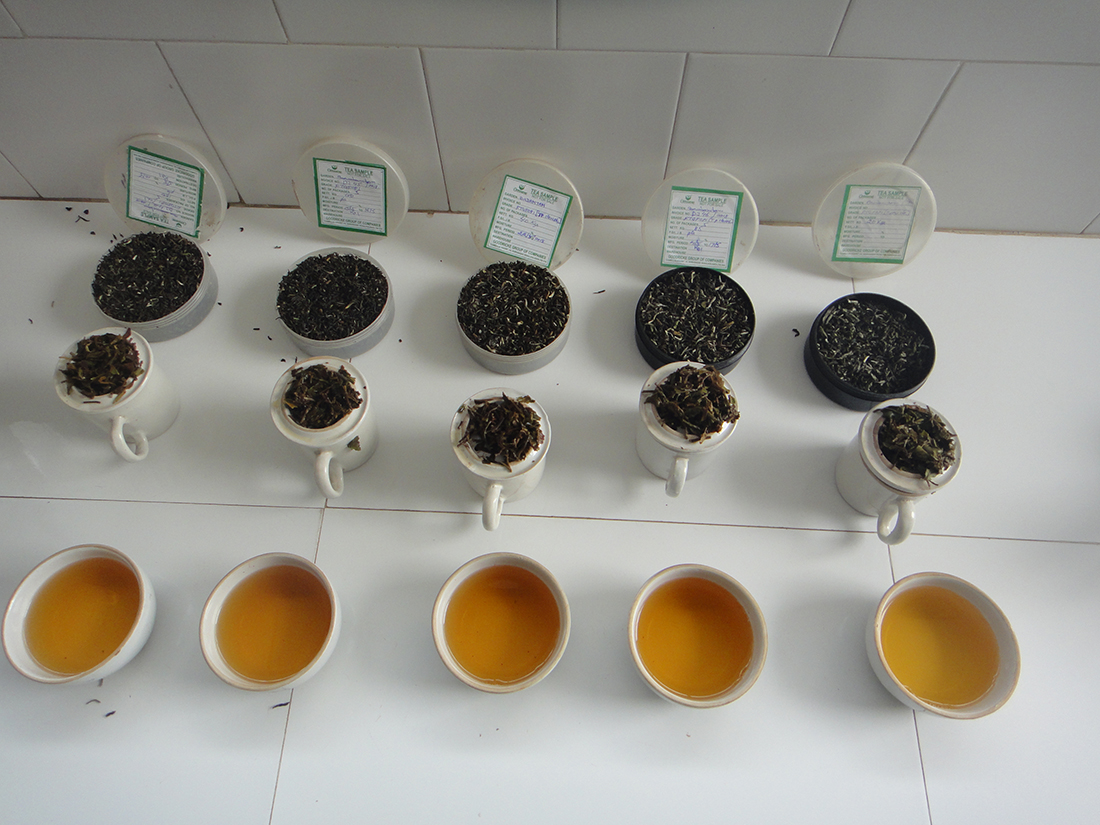 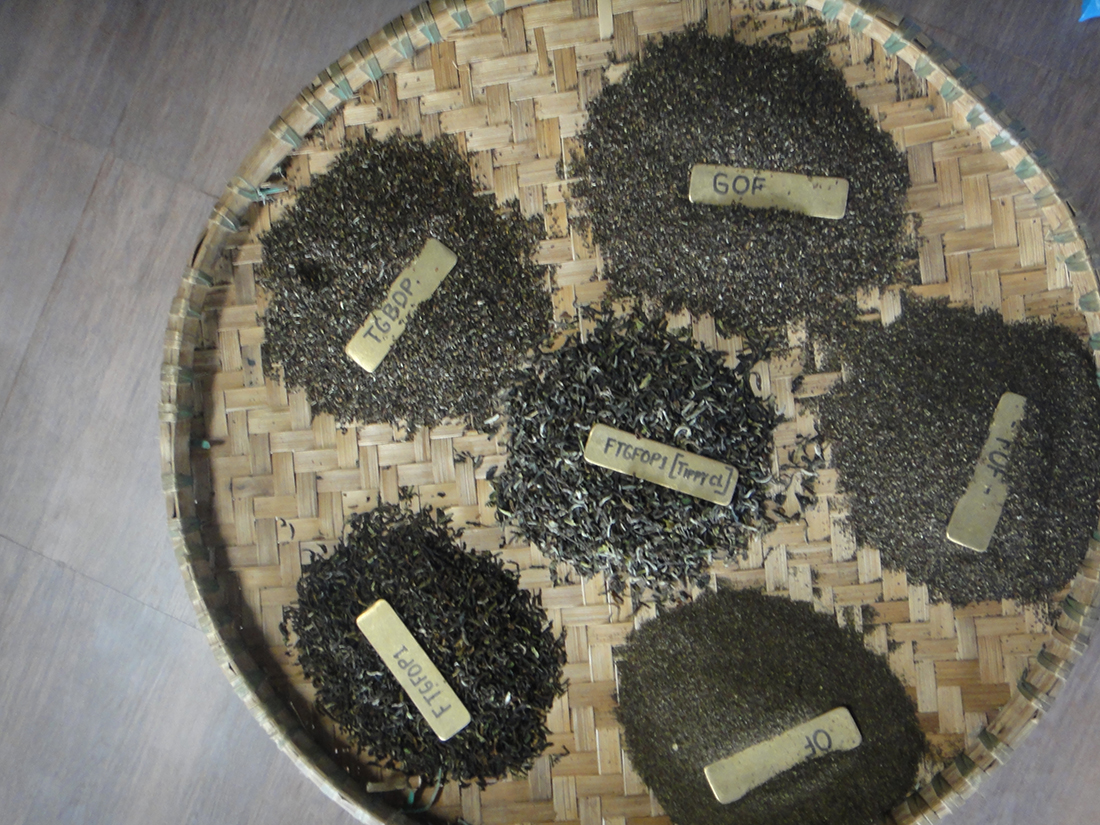 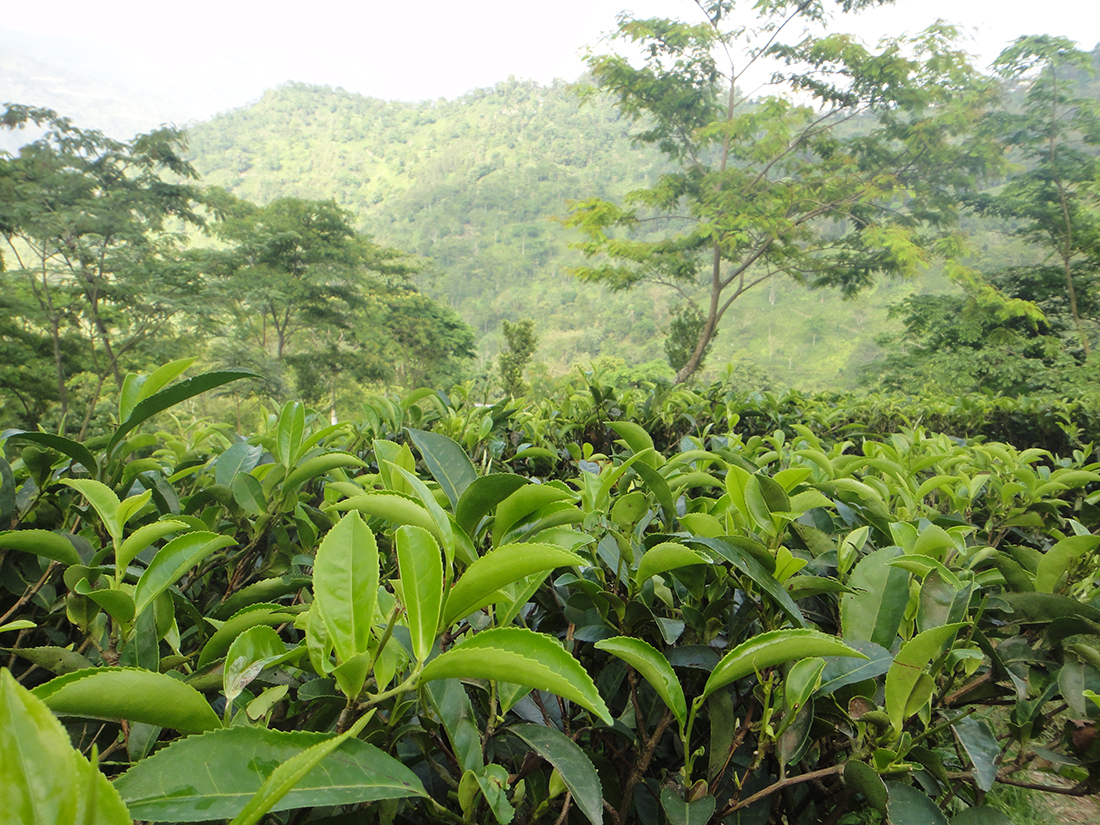 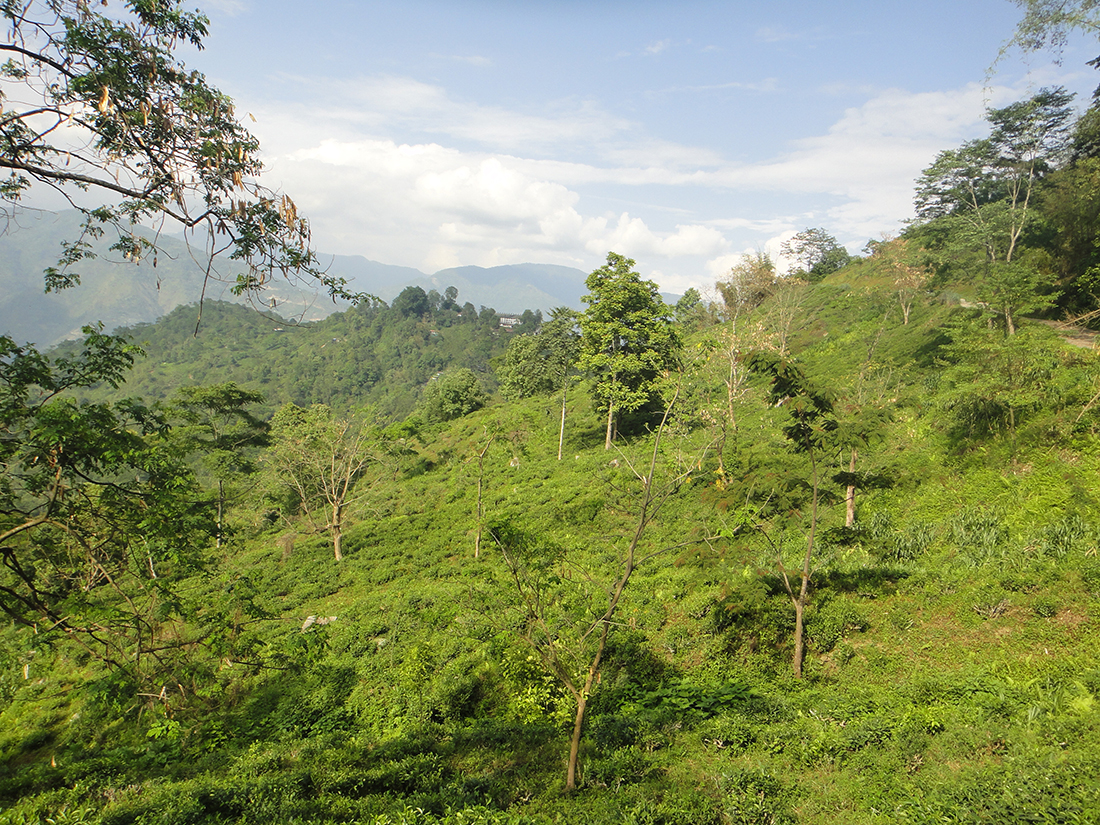 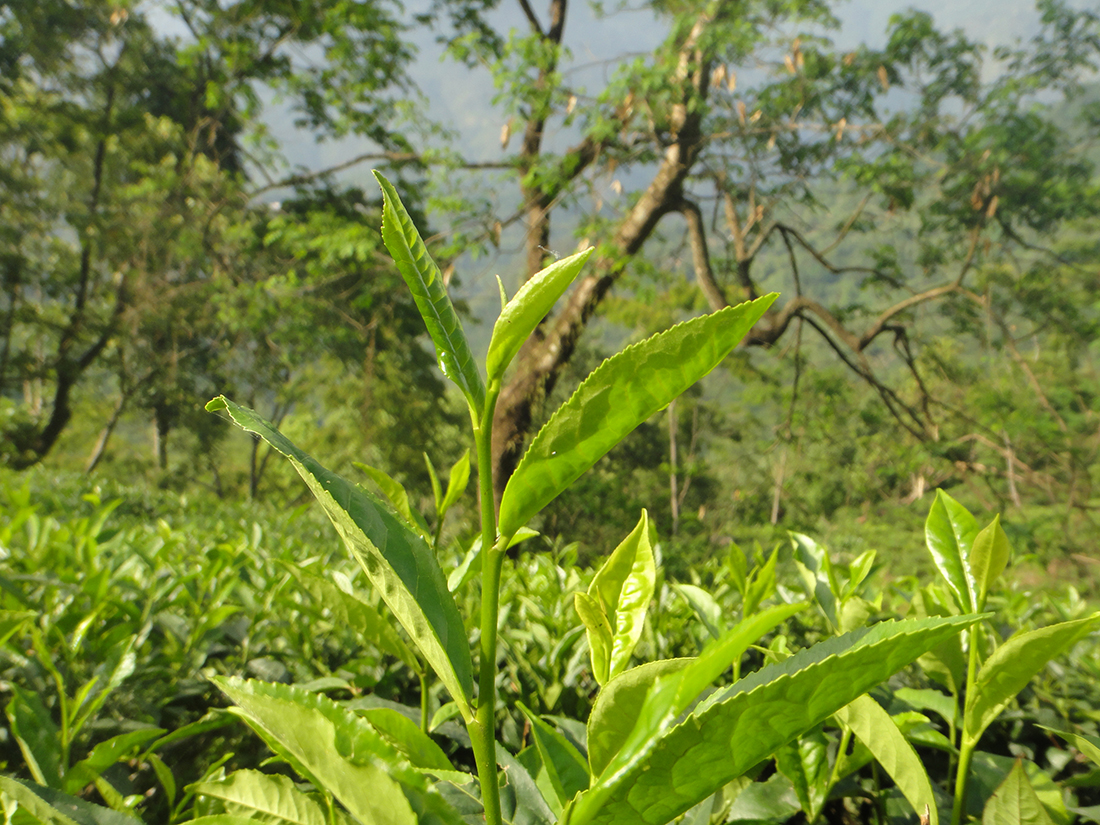 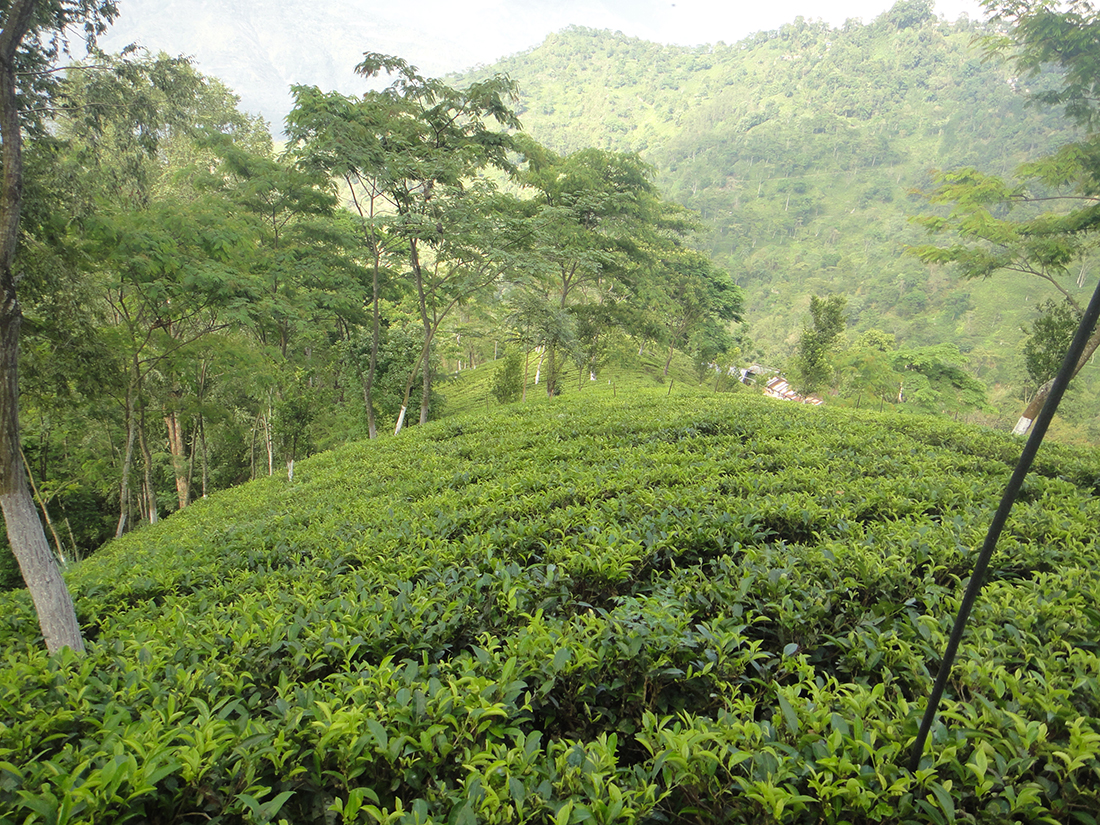