Christmas is a popular holiday in Denmark

Holidays and holidays in Denmark

Getting to know the culture of a country also means dealing with the holidays. Because just as a person celebrates, so is his soul. If you set the right time for your holiday in Denmark, you can also celebrate on a wide variety of festivals in Denmark.

The carnival in Denmark

The carnival custom came to Denmark around the 13th century. The "Fastelavn"Can be translated as" fasting evening "and is not so dissimilar to the German carnival. A great carnival takes place in Aalborg every year.

One of the carnival customs of Denmark is the so-called "Cat slapping". The cat as a symbol of evil was put in a wooden barrel. Now the barrel was hit until it broke and the cat finally ran away. Today, however, a cat painted on the barrel is enough to satisfy tradition on the one hand and animal welfare on the other.

Bundle of branches with sweets

It was no less squeamish Hitting a bundle of twigs to. The branches were decorated with images of newborn babies as symbols of fertility and they served to encourage women to achieve this fertility. Today the bundles of branches are filled with candy. The puff pastry rolls are particularly suitable for this.

Festively dressed riders and flag bearers lead the carnival parades on the Amage peninsular on. During the parade, the proud riders stop at various houses in the city and are supplied with rum punch. 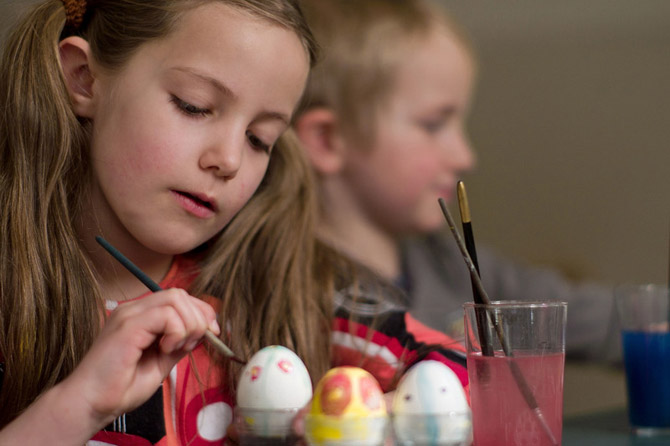 Easter time always means spring time. Nature is awakening to new life and the temperatures are becoming milder. The core idea of ​​Easter in Denmark is none other than in this country: The resurrection of Jesus Christ is to be celebrated. But the Danes also came up with a few special traditions for Easter.

The nature of spring is tied together in a colorful bouquet of spring flowers with bows and Easter eggs. Shrubs and twigs are used for decoration on the doors and facades of houses.

The "Gækkebrev" - A fool's letter with lilies of the valley

The Danes have a very idiosyncratic Easter tradition with the "Gaekkebrev“Made up. This is a rhyming letter that is sent to a secret recipient together with lilies of the valley. He then has to guess who the sender of this little gift was. Anyone who does not guess this is considered a fool and has to give the sender a kiss or some other kind of attention.

In terms of the meaning of Pentecost, as well as customs, the holiday in spring in Denmark does not differ significantly from the German tradition.

The date of Easter determines the time of Pentecost. Pentecost follows Easter every 50 days, whereby Easter Sunday is counted as the first day and Pentecost must again begin on a Sunday. Whitsun can be between May 10th and June 13th. Pentecost celebrates the meeting of Jesus' disciples with the Holy Spirit.

The customs of Pentecost

The customs around Pentecost know customs that are borrowed from May customs and also contain elements of earlier shepherd festivals in connection with the grazing of the cattle. This can be the decorating of a penguin or a billy goat auction. The individual customs can be very different locally.

The Danes celebrate their Constitution Day on June 5th. The "Grundlovsdag“Is not a non-working holiday, but the tradition goes back to the year 1849, when King Frederik VII replaced the absolutist royal law with the constitutional monarchy. 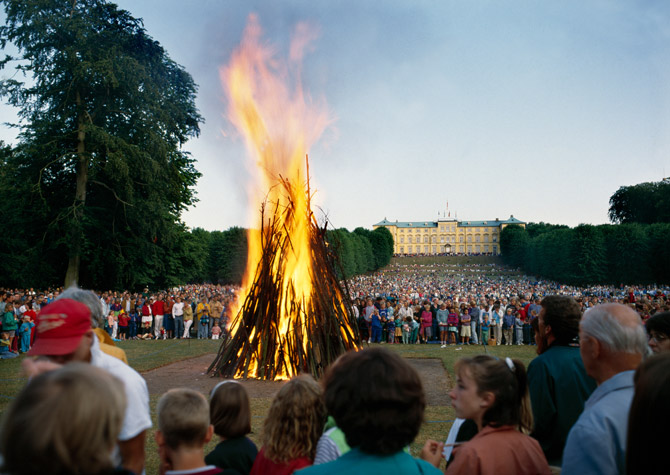 Sankt Johannis - John the Baptist, Christian saint. Celebration of the solstice in Denmark

In honor of John the Baptist

In Germany there is no public holiday in honor of John the Baptist. But in Denmark, June 23rd, supposedly the birthday of the biblical person, is one of the feast days. Yes, Midsummer Eve is even considered one of the most popular memorial days of the year.

The Midsummer Eve is considered a contemplative meeting of friends and family with a common dinner. At around 10 p.m., a large pile of wood with a witch's doll on top is lit at local festival sites. Prominent people give a speech beforehand. Then they sing together. Midsummer Eve is also known as the solstice festival, which actually occurs two days earlier. The midsummer festival is also lit on many beaches in Denmark.

The origin of Halloween

Halloween is also celebrated in Denmark. This is not a Danish holiday, but an imported festival. The origins of Halloween come from the Irish Renaissance and were first mentioned in folk documents in 1830. Halloween is celebrated on October 31, the evening before All Saints' Day. 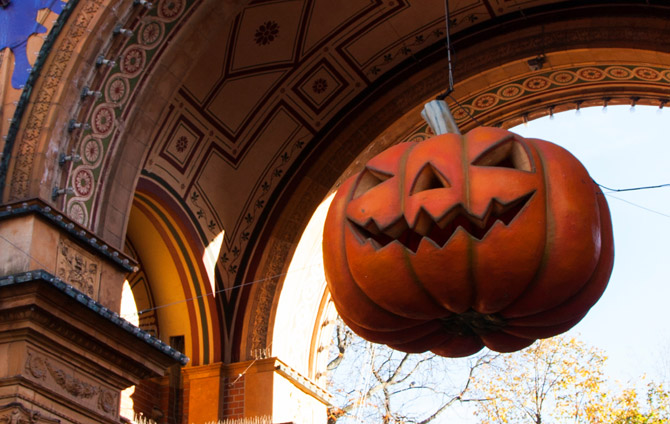 Although Halloween does not have a Danish origin story, there are also many Halloween events to marvel at in Danish countries. Many a holiday resort and not a few shops turn into the purest haunted place on Halloween. Pumpkins, Halloween decorations and ghost jewelry then adorn the shopping streets. The Tivoli amusement park in Copenhagen in particular will be a scary place this evening.

The day of repentance and prayer

The Day of Repentance and Prayer is also known in Denmark. On this holiday of the Evangelical Church, sinful people are to be called to repentance and to prayer. This ecclesiastical holiday is scheduled between November 16 and November 22. In Germany, the day of repentance and prayer is only considered a day off in Saxony. In Denmark, Remembrance Day has been known as a public holiday since 1686.

This is how the Danes celebrate Valentine's Day in Denmark

Lovers' Day has long since found its place in the calendar of annual events in Denmark. Although the Danes attach great importance to their own customs with a long tradition, they have gradually made friends with the "newfangled" Valentine's Day.

The Valentine's custom probably comes from the UK. Around the 15th century, the lot brought together so-called "Valentine couples" who gave each other gifts of poems they had written themselves or specially commissioned and small but fine gifts of love. This Valentine's ritual was brought to the New World by English emigrants, from where it was finally brought to Germany by American soldiers after the Second World War. But it wasn't until the beginning of the 1990s that Valentine's Day could really feel at home in Denmark, whereby the Danes were inspired by distant America and not by the numerous neighboring European countries that have been enthusiastically cultivating this custom for much longer.

Local traditions above all

The Danes cherish and cultivate their customs with great care. They also pay close attention to the fact that the traditions are passed on just as unadulterated as they were once passed down from the ancestors. The lion's share of the Danish population is of the opinion that traditional customs must not be changed, let alone influenced by foreign customs and traditions. This “purity law” of tradition naturally makes it very difficult for newfangled trends to gain a foothold in the small kingdom of Denmark and to establish themselves in it. It can of course happen that some Dane zealously cultivates the Christmas tree tradition without knowing that this custom has spilled over from Germany to the Scandinavian island kingdom. Some Danes reject Valentine's Day as well as Halloween because these customs were brought from the United States to ancient Europe and have nothing in common with time-honored traditions.

But like so many other things, this is also a matter of time. Despite numerous reservations from their parents and grandparents, the young Danes are not deterred from declaring Valentine's Day to be the day of love, as is the custom in many other countries. It can be assumed as likely that today's Valentine's Day fans not only express their enthusiasm for this day, but also pass on the Valentine's custom to their own children, who at some point will see February 14th as a typical Danish "holiday" in theirs Will have firmly anchored consciousness.

In Denmark, too, florists, chocolate shops and pastry shops are booming around February 14th. Flower hearts are just as popular as gifts, as are refined pastries and delicious pralines. But the Danes are even more creative when it comes to their Valentine's gifts. In addition to snowdrops as a “traditional” Valentine's flower, poems and even puzzles are popular gifts among lovers. These gifts of love are sent without specifying the sender, so the recipient has to find out to whom he owes the gift. If your guess is correct, you will be rewarded.

In Copenhagen it has become a popular ritual for lovers to put a padlock with their name on the "Bryggebroen" harbor bridge on Valentine's Day. If you then throw the key into the sea after an intense kiss, you can be sure of eternal love - at least according to legend.

If you are on holiday for two in Denmark on Valentine's Day, you have many great opportunities to celebrate this memorable day in a particularly beautiful and, above all, romantic way. Around half a million lights illuminate the evening amusement park Tivoli, which is the perfect backdrop for an unforgettable stroll. The wonderfully "hyggelige" canal district of Nyhavn is always a good tip for night owls in love who like it particularly picturesque. Since a gourmet menu for Valentine's Day is also very popular, a romantic candlelit dinner in one of the numerous gourmet restaurants in Copenhagen is always a good decision.

Long nights accompany winter in Denmark. And yet a holiday in Denmark can enchant you during the cold season. The Christmas customs in Denmark are not that different from those we know in Germany.

The pre-Christmas season also begins here on the 1st of Advent. Then the shops begin to decorate their stores with Christmas decorations. Then the sweets come in the shop windows. Illuminated fir trees are erected in the marketplaces, the Christmas markets and Christmas exhibitions awaken in the streets. Calendar candles are also popular as an alternative to the advent calendar. In Denmark, the Advent wreath is to be understood as an import item from Germany.

No, you will look in vain for St. Nicholas in Denmark. It is not part of the Christmas traditions here. That’s why there’s on December 13th Lucia. On this day, young girls wear white clothes and sing the song of Lucia in hospitals and nursing homes.

In Denmark, too, Christmas Eve is mainly celebrated with the family. On December 24th, the Christmas tree will be decorated in the national colors of red and white and a small Dannebrog flag should not be missing on the tree. Roast pork or goose with red cabbage and potatoes are served as a feast. Æbleskiver is considered a popular pastry for Christmas Eve.

Christmas in Denmark is all about family. However, New Year's Eve is celebrated with friends. At 6 p.m., the address of the Danish Queen Margrethe II will be broadcast on TV and radio.

As in Germany, a good meal is part of every New Year's Eve celebration. While the festive feast at Christmas can be a bit stronger, more and more Danes are opting for low-calorie Danish cuisine on New Year's Eve. There is no traditional New Year's Eve dish in Denmark, but you can always score points in Denmark on New Year's Eve with boiled cod, raclette or fondue and potatoes.

Be careful with the fireworks

Would you like to shoot your own fireworks in the sky during your holiday in Denmark on New Year's Eve? Then you should definitely purchase the fireworks on site. Because the import of fireworks from abroad is unfortunately not allowed.

Danes also celebrate their festivals as they come. And as a cosmopolitan people, they are also happy to let tourists join in the celebrations. If the calendar allows it, you should take advantage of this offer!