How can I help my city of Ahmedabad

AhmedabadSo the tour through the metropolis becomes an odyssey

As soon as they sit under the bright yellow roof, the driver hits the gas. Immediately the tuk tuk howls and squeezes off the roadside onto the overcrowded lane. The screams of the guests are drowned out in loud honking. A cloud of exhaust gases rushes into the nostrils and irritates the airways for a moment.

A tuk-tuk ride through Ahmedabad, the seven million inhabitant capital of Gujarat, is not for the faint of heart. She is pure chaos. As a matter of principle, no road user stops at red traffic lights - unless the intersection is multi-lane and heavily traveled. “A red traffic light just means paying attention,” explains Umakant Dubey with a smile.

An odyssey through Ahmedabad

It's good that the first stop is approaching: the simple Sidi Saiyyed Mosque. The sandstone window grilles that adorn the Muslim place of prayer are immediately noticeable. Because the daylight, which lets the motifs of ornate plants inside, draws ghostly patterns in the stone. The fact that an Indian spits out his teeth and washes them in the pond of the mosque makes us move on quickly. The contrast between the brightly colored Swaminarayan Temple and the mosque is huge. The color spectrum of a rainbow runs through the huge complex. Hindus sit on benches and tiles - a sublime backdrop.

Back on the road, we immerse ourselves in the noise that accompanies us towards the old town. The high pace only releases moments from the roadside: locals sitting on the sidewalk in front of taut tarpaulins. They are their makeshift beds. The tuk tuk rushes on.

Visa: Online as an e-Visa (www.indianvisaonline.gov.in) or at the Indian Embassy in Vienna. Be careful with the online visa: All information must be correct, otherwise you will not be allowed to enter the country.

Hygiene: A disinfectant is advisable, as well as many tissues for public toilets.

Eat: Indian food is spicy and usually vegetarian. Take medication with you for stomach problems. In addition, only drink water from bottles.

Vaccinations: It is best to ask your family doctor which vaccinations are necessary for the region.

Luggage: A maximum of 15 kilograms of luggage applies to domestic flights.

In the center it is better to walk. The orphaned stalls of a market line up in front of the old city wall in the mornings. “There are so many people here in the evening that you can only see their heads,” says Dubey. Then the senses rule here when Indian spices or specialties such as chai tea conquer the air.

In the side streets, however, the markets never close, there is always something going on. Street dogs slip past the locals who trudge on the bumpy sand roads. A sweet smell hangs between the houses - Gujarat is known for its sweet dishes: fried lentil flour or round, sweet balls made of chickpea flour are stacked in bowls by the stalls on the roadside. Here and there the Indians stop, chat, empty steaming masala chai from espresso cups.

Ahmedabad: Wandering around in a tuk tuk Driving a tuk tuk in India? This is a must - and preferably in a metropolis like Ahmedabad, which is the fifth largest city in the country.

You can read the entire report here. 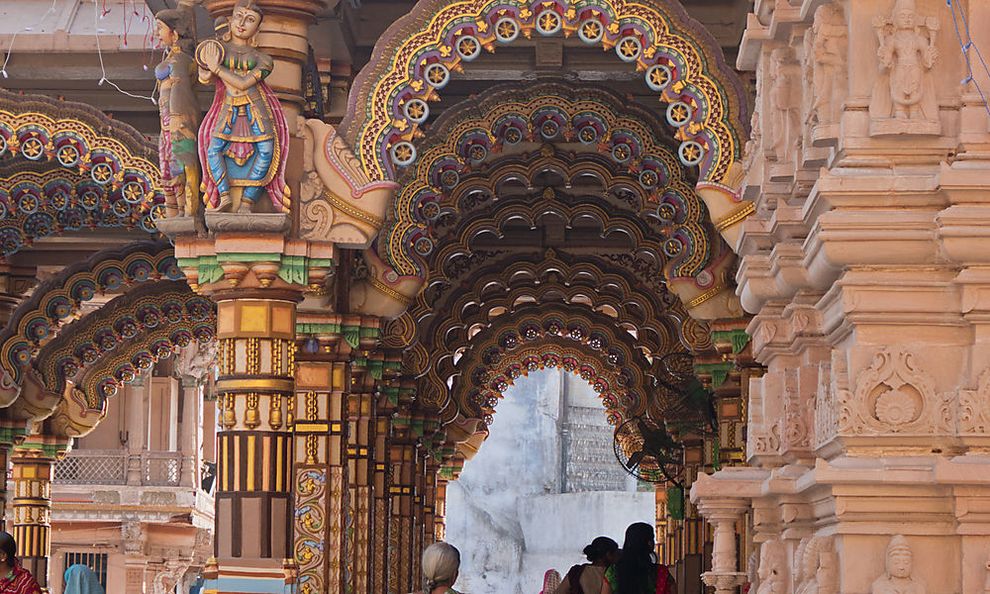 You can see the colorful Hindu temple Swaminarayan in the city center in the capital of Gujarat. 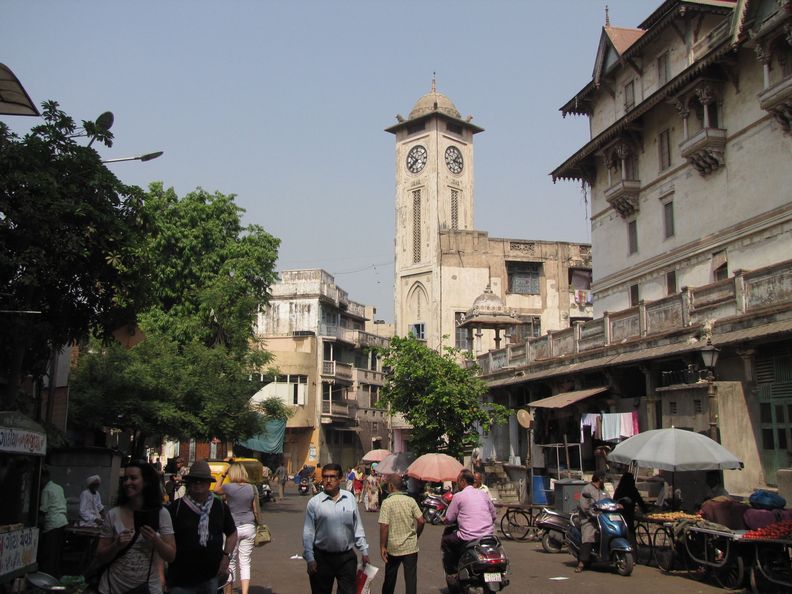 It is hidden in downtown Ahmedabad behind a thick wall in a small square with a clock tower. The colorful market life is hidden in alleys and winding, dusty streets, which is better explored on foot. 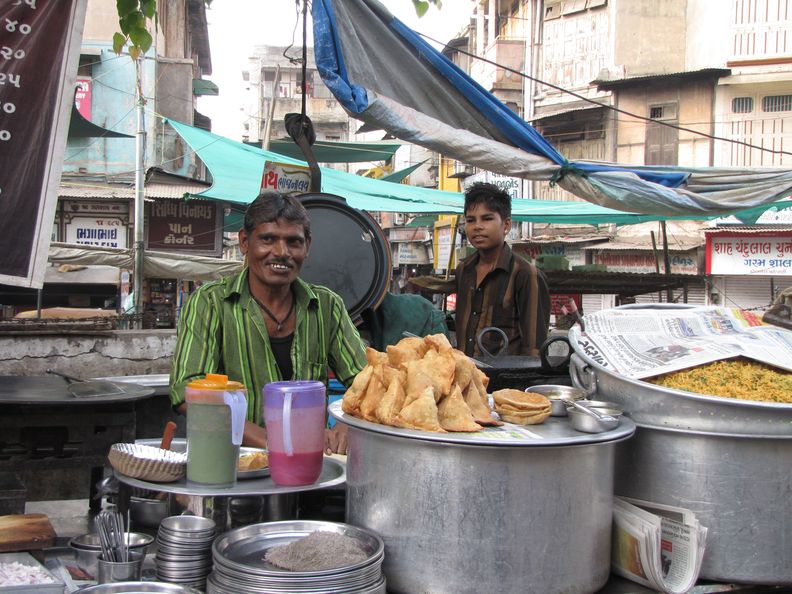 All sorts of sweet dishes are waiting there, fragrant ... 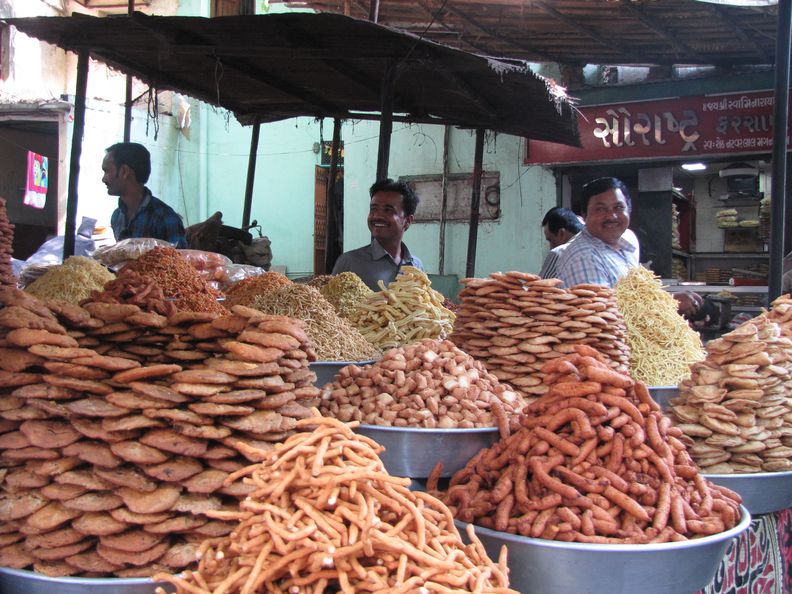 .. and tons of fried specialties. A thali is particularly recommended: spicy potatoes, spinach, chickpeas or lentils in small bowls, with rice and the flatbread naan. 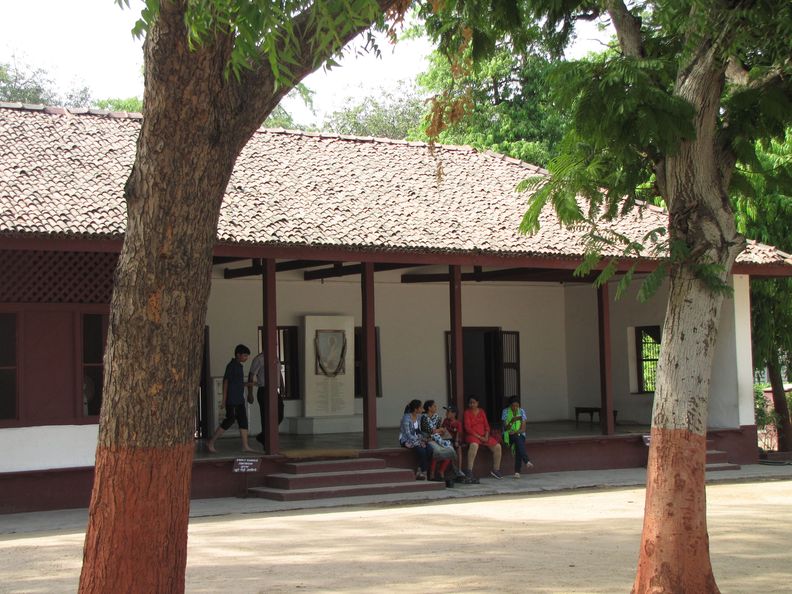 The house of freedom fighter Mahatma Gandhi, which is now a museum, is also worth a detour. The rest of the facility is now a spiritual ashram for meditation.

For all those who don't have a sweet tooth, thali is served everywhere: spicy potatoes, spinach, chickpeas or lentils in small bowls, with rice and the flatbread naan. Thali burns a lot in the stomach, but guarantees a real taste explosion.

Past the Jama Masjid Friday Mosque, which can accommodate around 8,000 people, the tuk tuk races on through the metropolis. That zebu cattle have now been banned from the larger cities - what luck. On motorways it can happen that a herd turns into oncoming traffic.

The last stop is a simple facility in the north. Freedom fighter Mahatma Gandhi, who grew up in a village near Ahmedabad, lived there. “Mahatma means 'great soul,'” says Dubey. Today the complex is a spiritual ashram for meditation, the street noise has been swept away. The place moves the madness of the metropolis aside, decelerates in the midst of the pulsating chaos. You even forget the fear of death in a tuk tuk.

Raiffeisen Reisen offers twelve days in Gujarat (with eleven nights):
Travel periods: February 18, 2019 to March 2, 2019 or March 18 to 30, 2019.
Getting there: from Vienna with Brussels Airlines via Brussels to Mumbai.
Domestic flights: from Mumbai to Bhuj, from Ahmedabad to Mumbai.
Itinerary: Bhuj and the Banni villages, Gondal, Sasan Gir National Park, Diu, Bhavangar with one
Excursion to Palitana, Bajana, Modhera, Patan, Poshina and Ahmedabad.
Information at www.raiffeisen-reisen.at.

This trip was supported by Raiffeisen Reisen and Brussels Airlines.