Invasion of lionfish in the Caribbean

Divers armed with spears impale lionfish. Blood-smeared and half-dead they hold the animals out to the Caribbean reef sharks to eat. The predatory fish should get a taste of the beautiful but destructive fish - and thus contain their spread. 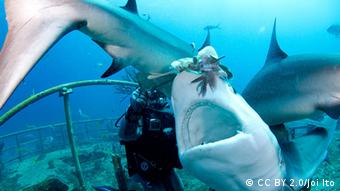 Hand feeding the lionfish to Caribbean reef sharks became too risky for the divers.

But while the blood spreads in red eddies in the crystal clear water, the sharks get a little too hungry and crowd around the divers, who risk getting injured in the process. The sharks seem to be able to digest the poisonous fish well. But the divers decide to stop the experiment after a week.

"The sharks are very excited, it could put the divers at risk," says Giacomo Palavicini, managing director of Roatan Marine Park (RMP), who organized the experiment in 2010 off the coast of Roatan, an island in Honduras in the Caribbean.

On Roatan, the red-brown fish with the white stripes and the radiant fins protruding from the body have been fought for six years. He is so unwelcome because of his great appetite for the other fish and crabs that are so important to the health of the Mesoamerican reef system. In other parts of the Caribbean and Western Atlantic, the intruder, originally from the Indian and Pacific Oceans, has been a problem since the 1980s.

Even if the short-lived hand-feeding experiment seems extreme, it shows how desperate the situation has already become. It also marks the beginning of a broader strategy designed to put both the people and wildlife of the area in position against the lionfish. In a broader sense, this struggle also stands for the struggle to preserve the biodiversity on Roatan, which depends on the coasts and water being kept clean, says Palavicini.

RMP educates local people about the economic and environmental impact of the lionfish invasion. The experts of the marine protection park have already trained 1500 of the residents in the environmentally friendly killing of fish - not a small number compared to the 100,000 inhabitants of the island. 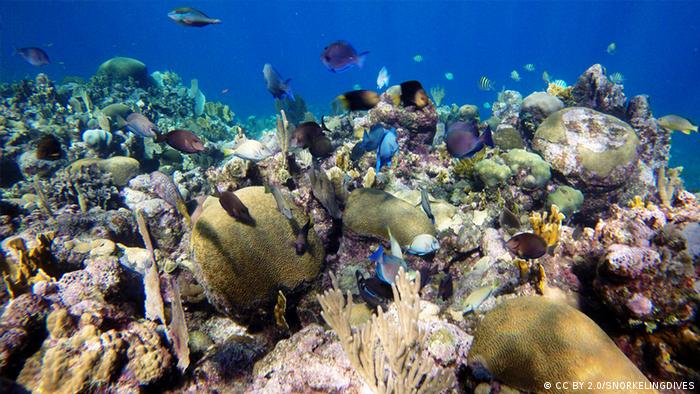 Thanks to conservation efforts, the coral reef off Roatan is relatively intact

In coordination with government agencies, the NGO ensures that the hunters are properly trained on the spears so that they do not injure other animals or damage the reef during the hunt. During the training, the participants try to spear coconuts hidden under water. If the divers miss their targets and hit the reef more than once, they will not be granted a lionfish hunting license.

The efforts seem to be bearing fruit.

"Lionfish no longer swim in the open water around the reef, as they did in the first few years," says Nicholas Bach, Head of Communications at RMP. "They have learned to hide or flee from us when they hear the sound of air bubbles."

Divers report that the lionfish now hide during the day and have returned to their natural behavior: they prey at night. This suggests that the animals have developed fear of possible predators. Recent studies also show that in the waters off Sandy Bay at the western end of the island, where the intruders are hunted particularly intensely, the number of lionfish has fallen dramatically and local fish stocks have recovered.

The experiment of controlling lionfish by feeding it to sharks was not a complete bust, says Palavicini. His team would have made it clear that over time, the marine world may be willing to eat unknown, invasive species.

While the ocean currents dispose of some of the lionfish, other specimens are given to grouper, snapper and triggerfish to eat. Some islanders report seeing the perch eating the spindle-like intruders. But training local species to hunt lionfish isn't the best option, says Bach. It could make the animals trained to be predators even more aggressive. And in the end that would also be a problem for the trainers, as the shark experiment showed.

A study published in 2013 in the journal PLOS ONE concluded that controlled killing of the fish - for example by harpooning - was probably the best way to keep the lionfish population in check. Or to eat them, as the study says. But the islanders haven't gotten a taste for it yet - their respect for the poisonous fins is too great, says Palavicini. Eating the fish is no problem at all if it is properly prepared, and RMP regularly offers barbeques for tourists to get them excited about the soft, tasty meat of the fish.

Water is the key 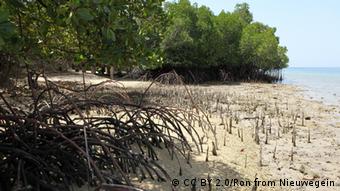 Mangroves protect the coast from erosion and keep the water clean

Roatan's largely pristine crystal blue waters and the colorful coral reefs with more than 500 species of fish are major tourist draws. But in order to preserve the exact biodiversity that brings travelers to the island, it takes more than just killing lionfish.

Seagrass and mangroves are the first line of defense against water pollution - they act as natural filters. Protecting them is just as important as preventing sewage from polluting the ocean. The Bay Islands Environmental Protection Association is therefore working with the German development bank KfW to ensure just that - by improving sanitation for low-income households on the island.

"Now is the time to stop the reef from decaying," says Palavicini. "But the local people have to strive to be part of the solution at every level."