What happens to the environment

Pollution happens when people don't properly dispose of their waste, but simply leave it to the environment. This can be plastic that is carelessly thrown away, but also toilet flushes that are not sent to a sewage treatment plant. The exhaust gases from cars, airplanes and heating systems also pollute the environment, as does waste from mining and many other things that humans do.

Large-scale pollution has been around since industrialization. Even then it was noticed that around many factories the snow was turning black with smoke. Many substances found their way into the waters through the production of leather or in dye works. This made them colored, foamed and smelled.

In the years after 1960, many bodies of water were so heavily polluted that it was no longer possible to swim on many of the famous beaches. Later, people noticed how dirty the air is in some places. You could also see this in the fact that some forests became sick and died. At that time people spoke of the forest dying. For these reasons, a new thought arose: environmental protection.

In a short time, chemists discovered that plastic is not just everywhere in large, visible parts. There are also innumerable tiny parts, the microplastics. This tiny little plastic waste is now distributed all over the world and it even exists in Antarctica, where almost no people live. So environmental pollution has increased steadily in certain areas.

How is the environment polluted?

The best way to see pollution is when waste is left behind. Plastic is then on the roadsides or in fields, but also cigarette boxes, food packaging and much more. That looks ugly. But it is also dangerous: cows, for example, swallow waste with the grass. People and animals can injure themselves on an aluminum can. Toxic substances can also find their way into nature if the waste decomposes over time. Plastic or metal waste sometimes takes decades to decompose.

Another type is water pollution. There is already a lot of waste in rivers, lakes and seas. Turtles, for example, eat plastic because they think it's jellyfish. Over time, they die from it. But there is also invisible pollution of the water by poison. Toxic substances that can make animals sick and even kill them still find their way into the water from many chemical factories. Drug residues get into the wastewater through the urine. In the case of fish, for example, they can prevent them from having healthy young.

A third type is air pollution. Exhaust gases from cars, airplanes and heating systems always contain a proportion of toxic gases. Such poisons are also released into the environment through accidents in chemical factories. In some countries people burn computers, other parts of electricity or cables to later pick up the valuable parts like copper. Such fires have a particularly strong impact on the environment and people. The large amount of carbon dioxide emitted in traffic and in many power stations and factories also pollutes the environment.

A fourth type of pollution affects the soil. In many places, agriculture gets too much fertilizer into the soil. This can have harmful effects on the groundwater, for example. A lot of residues from spraying agents are also deposited in the soil. Poisons that are carelessly dumped away are particularly bad, for example residues of pesticides, but also gasoline, oil and other liquids.

A fifth type of pollution occurs from nuclear power plants or atomic bombs. They send invisible radiation into the environment. People, animals and plants get sick from it and can die from it. The waste generated in nuclear power plants will continue to radiate for thousands of years. To this day we still don't quite know where to store nuclear waste.

Many people today also count radiation from cell phones and their antennas as environmental pollution. Others include the noise, which is mainly caused by traffic, but also by church bells. Many people also consider too much light pollution because it disturbs the natural life of animals and plants.

What is particularly bad for the environment?

How bad waste is for the environment also depends on how long it lives there. Of this selection, the glass bottle is the worst.

It depends on whether the substances are highly toxic, how much of them it has, where they are and whether they disappear by themselves in nature. Heavy metals such as lead and cadmium are particularly toxic. Very little of it is needed to damage nature. It doesn't matter where these toxins are.

Carbon dioxide is a gas. It arises not only in a burn, but also in most living things. We humans also exhale carbon dioxide. The green parts in the plants break down the carbon dioxide again, that would be a natural cycle. But burning coal, oil and natural gas creates so much carbon dioxide that climate change has set in. The world is getting warmer and warmer.

Third, it is important where the fabrics are located. Plastic is less bad on the roadside than in the ocean, because there it can be eaten by turtles and fish. Uranium is less bad in a nuclear power plant than when it explodes and the uranium is distributed in the environment.

It is also important how long the unwanted things stay in the environment. A banana peel disappears very quickly through nature. An aluminum can takes over a hundred years, a pet bottle around 500 years. Waste from nuclear power plants radiates for about 100,000 years. Glass hardly degrades at all in nature. So it stays there almost forever.

Can it get worse than the pollution? 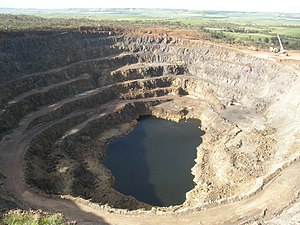 This landscape was totally destroyed by the mining of copper.

Mining can also destroy the environment. This applies to open-cast mining, i.e. where the earth is removed in order to get to mineral resources such as coal or certain metals. The mining of gravel for concrete can also have an effect. There are examples of this kind in our countries too.

Industrial accidents can also destroy the environment in a certain area. Accidents in chemical factories can cause strong poisons to get into the air and water. The accident at the Chernobyl nuclear power plant destroyed the environment over a wide area.

There is also an article on “environmental pollution” for beginners on MiniKlexikon.de and other search results from Blinde Kuh and Ask Finn.