Can't people do anything

The sweet one Do nothing does not have a particularly good reputation. In a performance society like the German one, work is highly valued. In contrast, inaction is quickly condemned. Even involuntary unemployment in the form of unemployment is seldom condoned. Doing nothing is only one side of the coin and at least as important for people as meaningful occupation. And it's not as if most people can't somehow pass the time: Everyone moans about Monday, looking forward to the weekend or vacation. But the free time is also packed full from time to time. Why doing nothing is so important and how you can benefit from it ... 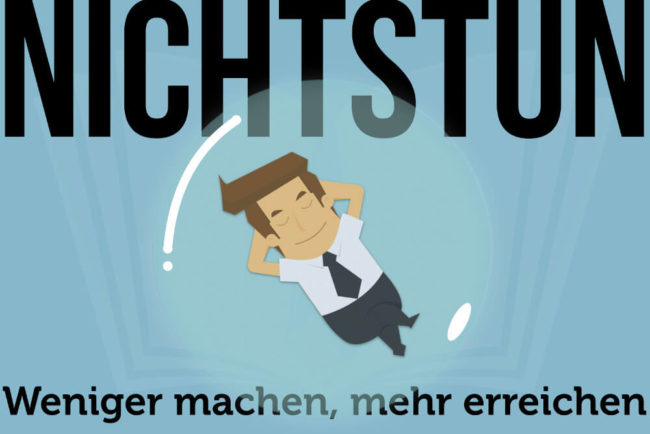 Inaction Definition: What is that anyway?

The noun idleness is a combination of the pronoun Nothing and the noun To do, so the correct spelling is loud Duden: Do nothing. On the other hand, if you want to express that a person do nothing, change or accomplish, write apart, for example:

What is meant is a Behavior without activity. A synonym for doing nothing is also often said:

Doing nothing is downright a bad word in the world of work. Everything is up Productivity, performance and efficiency designed. In the best case, it might still be about time management or: self management. Because time is just as long as it is - no more, but also no less.

But whatever you call the child: It's almost never about gaining time just to indulge in doing nothing. Much more often it is about even more in less time to accomplish. To optimize yourself. And that partially degenerates:

There is hardly an area in which people would not optimize themselves. Sure, the workflow will be optimized. But hey, isn't there still some room for improvement what they own personality concerns? And speaking of the person: what about fitness?

So quickly booked a few more coaching seminars and registered in the gym. Everything can get a little better, higher, further, faster. Maximization instead of satisfaction.

Why doing nothing is so important and so healthy

Doing nothing has to become an integral part of everyday life, otherwise it becomes mental health suffer from it, at least say psychologists. This does not have to manifest itself in mental illnesses such as depression, anxiety disorders or addictions.

More often, psychologists and psychiatrists observe disorders that can develop into something worse in the long run: Everything will pressed into a template and then has to fit. In the case of examinations, certain services must be provided, otherwise performance-enhancing agents are used to help.

Hyperactive children are immediately diagnosed with ADHD and medication is used to ensure that school lessons can be completed satisfactorily.

People have to function and an ideal in body and soul correspond. According to critics, there is no time for idleness, because many are chasing various ideals. In the long term, this gnaws at your self-esteem and causes stress. And both have a negative impact on performance.

On the other hand, biologists have found that doing nothing slows down the activity of the brain waves and is therefore healthy for the mind and body. The Blood pressure drops, the stress subsides. These reactions strengthen the immune system. But doing nothing is so important not only for your physical and mental health.

Ultimately, it means that you recharge your energy reserves and gain creativity for new tasks. Doing nothing allows you mental clarity so that you can go with it Look at your goals can make decisions much more easily.

Learning to do nothing: this is how it works

You should believe that you can just be lazy and indulge in doing nothing not that difficult at all be - after all, that also works on vacation.

But the holiday example in particular shows that more and more frequently Doing nothing is not that easy is, but that we do it frequently forgotten to have. Even when they are actually free, many people think they have to squeeze everything into their free time. And it's not even just about physical activity. Nice Crossword puzzle contradict the basic idea of ​​doing nothing.

But also that Smartphone has made us lose our ability to do nothing. More and more people are therefore prescribing a digital detox for themselves. Just put the pocket demon aside and there let lie. Not being available all the time, but also not constantly checking emails and notifications, playing games or solving puzzles.

Maybe just ignore news from all over the world. Yourself no worries about current world politics and any megalomaniacs, but concentrate entirely on yourself and your own concerns.

But this is not only important on vacation. On the other hand, doing nothing has apparently been difficult for people in the past, as this quote from Oscar Wilde shows:

Doing nothing at all is the most difficult occupation in the world and at the same time the one that requires the most intellect.

But how is doing nothinghow can it be learned? We have to following tips:

Regardless of whether you ask psychologists, philosophers or coaches: Pretty much everyone comes to the conclusion that doing nothing is essential Part of the lifetime should be and is. Just do nothing for a while, just observe, ponder, let your thoughts go.

These daydreams are important and by no means a waste of time. Because if you mentally switch off once or several times a day and simply do nothing, you give your body and brain that Opportunity to relax. Other languages ​​- whether English, French, or Spanish - typically have terms for people who are prone to this condition. That’s what it’s like in Italian, for example "Fannullone" and is usually not meant in a disrespectful way.

But in Germany such a situation quickly triggers panic in one or the other: doing nothing is associated with a lack of discipline and being drifted. Those who do not fill their day with activity for at least twelve hours may still be judged as lazy. Too much activity can turn into (blind) actionism.

Then namely, when the real hustle and bustle Lost sight of goals become.

What other readers have also read