What stimulates the DNA to transcribe

Protein synthesis topics on this page:

The transcription of DNA

Protein biosynthesis, i.e. the synthesis of proteins, is divided into two main processes. These are called transcription and translation. In this section we deal with transcription.

During transcription, a section of DNA is translated into a strand of mRNA. Only one of the two DNA strands, the codogenic strand, is read. On this strand there is a certain base sequence, the promoter. An RNA polymerase attaches itself to this starting point after it has recognized this starting sequence.

The DNA double strand is then untied and opened. From here, the RNA polymerase reads the codogenic strand from 3'- in 5'-direction and synthesizes the messenger RNA (mRNA), complementary to the strand read. This is done by linking RNA nucleotides together. Instead of the base thymine, which is complementary to adenine, the base uracil is built into the strand of the mRNA. At a specific target point in the DNA, the terminator sequence, the RNA polymerase detaches itself from the DNA.

The mRNA processing takes place exclusively in eukaryotic cells. This is where the so-called pre-mRNA is created during transcription, which consists of different sections, the exons and introns. The exons code for a protein and are therefore important for the next steps in protein synthesis, while the introns contain no information. A specific group of enzymes, the spliceosomes, therefore cut the pre-mRNA apart, take out the introns and reassemble the exons to form a mature mRNA. In addition, caps made of proteins are attached to both ends of the strand, which protect the mRNA strand when it leaves the cell nucleus.

In addition to simply cutting out the introns, there is another form of splicing. The exons of the pre-mRNA are reassembled in an alternative order. A segment of DNA can code for several proteins. One then speaks of alternative splicing.

During translation, the (mature) mRNA is translated into an amino acid sequence. This happens through ribosomes in the cytoplasm, in eukaryotes that is outside
of the nucleus.

Ribosomes belong to the cell organelles and consist of a small (30S) and a large (50S) subunit. In the inactive state, these are present separately and only come together when an mRNA is translated into an amino acid sequence. Ribosomes have three adjacent binding sites (A, P and E sites) for the so-called transfer RNA (tRNA). The tRNA is a nucleic acid that is loaded with a specific amino acid by the enzyme aminoacyl-tRNA synthetase. Which amino acid belongs to which tRNA complex is decided by an important structure of the tRNA: the anticodon. The anticodon on the tRNA is a base triplet which is complementary to a triplet (codon) on the mRNA.

If the upper and lower ribosome units encounter an mRNA with the start codon AUG, they align with one another and translation begins. The tRNA with the appropriate anticodon to AUG, i.e. UAC, then attaches to the binding site P (i.e. to the middle binding site!) In the ribosome. Another tRNA, which has an anticodon that is complementary to the next codon on the mRNA, attaches itself to binding site A in the ribosome. Peptide bonds are formed between the two amino acids with which both tRNAs are loaded, whereby the amino acids are linked to one another.

The ribosome now always travels a triplet on the mRNA (from 5 ’to 3’ direction), whereby the first tRNA slips onto the E binding site and is released again. The second tRNA migrates from the A to the P binding site and the next loaded tRNA attaches to the A binding site. Here, too, the new amino acid is linked by peptide bonds, so that a polypeptide chain is created at the P binding site. This continues until there is a stop codon on the mRNA (UAA, UAG or UGA). The polypeptide chain is then split off and the ribosome breaks down into its subunits. The read mRNA is then either broken down or translated again.

It often happens that several ribosomes read an mRNA at the same time. This ensures that the required proteins are synthesized faster and more efficiently. This structure of many ribosomes and an mRNA is called a polysome. 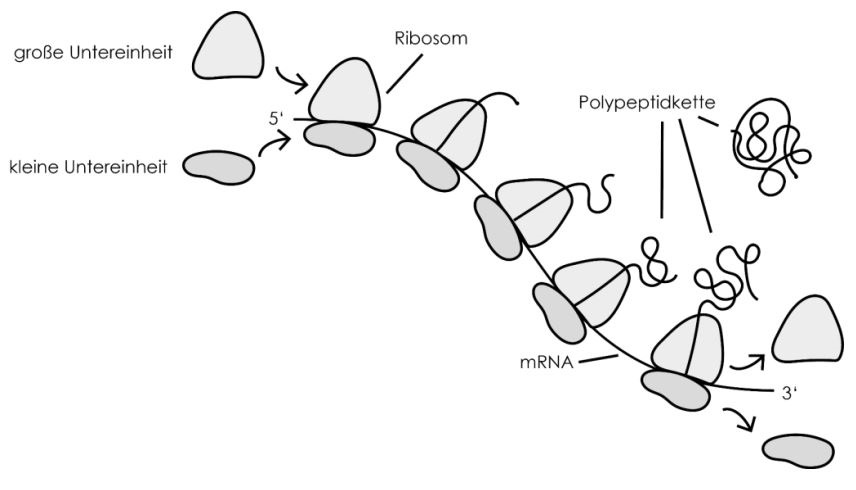 The spatial structure of proteins

The bonds between the individual amino acids and structures are very specific for each protein. If an amino acid is missing or if one is replaced, the binding properties for the spatial structure of the protein also change at that point, which can have more or less serious consequences.

To decipher the genetic code, i.e. to translate a base sequence into the amino acid sequence, a so-called code sun is used.

The codons correspond to those on the mRNA and are read from the inside (5 ') to the outside (3'). 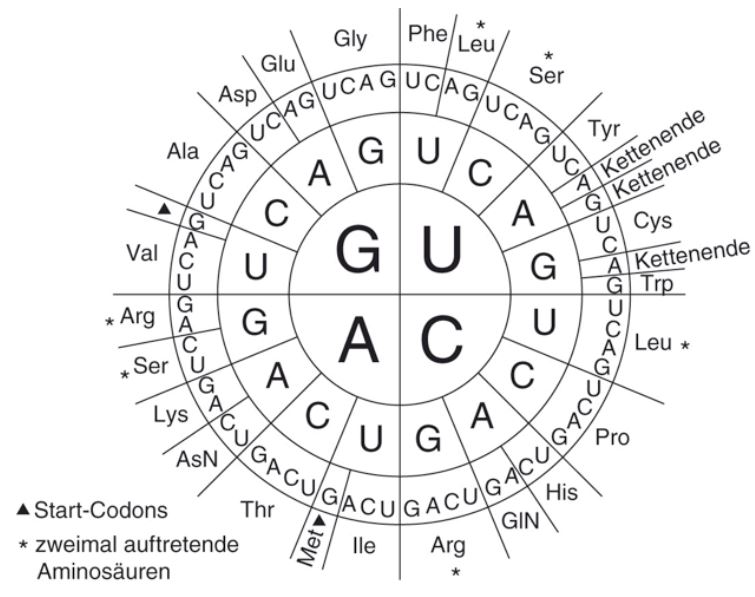 In summary, watch the learning video from Die Merkhilfe on the subject of protein biosynthesis!