For a long time in Cesc Fabregas' career it looked as if his career would be defined by two clubs: he grew up in the youth of FC Barcelona, ​​developed into a star at Arsenal FC and then returned to his club of heart. There he wanted to cement his reputation as one of the best game designers in the world

Born in Catalonia and a former Blaugrana fan, he wanted to continue studying alongside some of the best players in the world such as Xavi and Andres Iniesta and eventually become the "number six" in Barcelona's midfield.

And of course he wanted to win titles. In London he only won the FA Cup, at Barca further trophies seemed guaranteed in the summer of 2011.

Leader or one of many?

During his entire time at Arsenal, he had never made a secret of the fact that he wanted to play again one day for the Barcelona he loved so much. There were, however, arguments in favor of staying with the Gunners. There he was the youngest captain since icon Tony Adams. The crew was built around him. He was the leader. At Barca, the unanimous opinion was that he would be just one of many.

Nevertheless: After several transfer periods in which both clubs had haggled over a transfer, he finally got his wish and returned to the Camp Nou. At first it looked like a masterful move: Fabregas made a splendid start in the Primera Division, scored almost at will and underlined that he can be used in several positions. 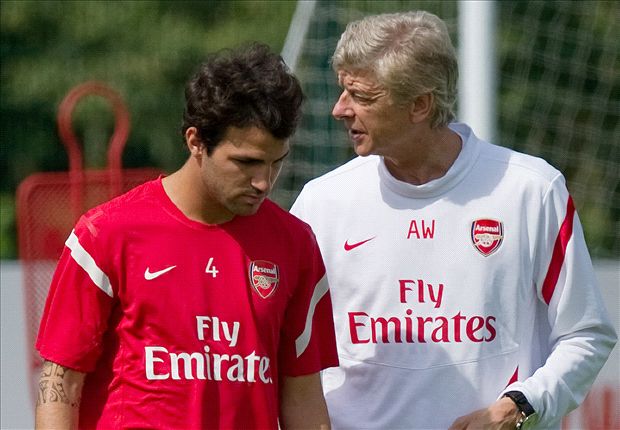 When Fabregas left, he was one of several top performers who turned their backs on the Emirates. But something differentiated him from players like Samir Nasri and Robin van Persie, who no longer like to be seen at Arsenal. They then loudly criticized their former employer.

Anders Cesc: The then 24-year-old used his performance at Camp Nou to thank Arsene Wenger. That Wenger, who because of his stubbornness and unwillingness to give up Fabregas, had become the target of the Catalan sports press. "Without him I wouldn't be here today and I couldn't live my dream. I have to be grateful to him. I will never have enough words to describe what I think about Arsene Wenger."

The love for Arsenal remained

He was also confident about Arsenal's future: "Jack Wilshere will be the next England captain in a few years. He's a top player. Aaron Ramsey will be a big star. The future belongs to you." As a result, the world champion repeatedly expressed himself positively about the ex-club. Just like he did about Barca when he was still playing in London.

Just four months after moving to Barcelona, ​​he revealed that if he left Catalonia, he could only imagine returning to his old homeland. He was gone, but his love for the Gunners remained.

Three years later, things didn't go smoothly between Cesc and Barca. At the end of the 2012/13 season he was booed by some fans at Camp Nou and was heavily linked to a transfer to Manchester United. However, he decided to fight for his place.

Arsenal let the option slip by

After this turbulent summer, Fabregas made another good start to the season. But again it gradually lost its shape. In October he said of a possible Arsenal transfer: "The club is in my heart and always will be. They are always there for me, their doors are always open to me."

But he was wrong! His third season with the Barca pros would be his last and soon there were signs of a move back to England. Arsenal had the option to buy it first. However, Wenger had brought Mesut Özil for the ten position last summer and has now decided that he would better invest his money differently.

So Fabregas chose Chelsea and the irritation among the fans was of course great on Thursday afternoon. Cesc himself said: "Everyone knows that Arsenal had the first option to sign me. But it wasn't meant to be. I wish the club all the best for the future."

"A world-class player that is not easy to find"

If his Barca marriage had been divorced a year ago, the situation would certainly have been different. Arsenal would have kissed him. In January 2013, Wenger said, referring to his skepticism about expensive transfers: "Fabregas is an exception. One that I would do. Because he is a world-class player that is not easy to find."

Time will tell whether Wenger is right with the decision against the Spaniard. Ironically, Fabregas will try to get his career going again with the London rival of his beloved club, of all places.

If he had never left Arsenal, he would still be the captain today, presumably already a living legend, and still a protégé of Arsene Wenger, whom he valued so much. Instead, he now has to prove himself to another club.