How was Wing Commander Abhinandan captured

In view of the current worsening situation, a preventive collective thread.

Apparently they are currently firing at themselves extensively with artillery:
Twitter

Earlier in the day India carried out an air raid on a Jaish-e-Mohammed camp in Balakot, Pakistan.
ARD
Whether the Indians really hit a terror camp remains to be seen, and also what the announced "retaliation" from Pakistan will be.

The main burden of the Indian attack apparently carried the Mirage, according to this source: https://twitter.com/HoansSolo/status/110037...6965514240?s=20
And it is escalating ... Pakaistan shot down 2 Indian jets over Pakistan. A pilot has been captured.
According to initial reports, a Pakistani F-16 is said to have been shot down as an Indian reaction.

https://www.welt.de/politik/ausland/article...ugzeuge-ab.html
I don't know if it's worth opening a new thread ....

In the simmering Kashmir conflict between India and Pakistan, several aircraft were shot down.
https://www.t-online.de/nachrichten/ausland...m-kampfjet.html
The shooting down of an Indian Mig-21 bison has been confirmed so far. The pilot has been captured.


In addition, seven people were killed in the crash of an Indian Mi-17.


There is currently no evidence to support India's claims to have shot down a Pakistani jet over Pakistani territory.

Background: On February 14, a suicide bomber from the JeM mentioned in the first post killed 40 police officers in Kashmir, and parliamentary elections are due in India in about one to two months. Narendra Modi's coalition is under pressure, among other things, because of its economic policy. So there is a tough line against terrorism - could it be that India simply underestimated the Pakistani reaction?
The curiously stable unstable situation in Pakistan represents a constant security threat to its neighbors Afghanistan, India and Iran. Pakistan tolerates a number of extremist elements within its borders that continually terrorize at home and abroad. And it is by no means as if Pakistan (i.e. the government, security forces, ISI) were in any way cooperative in the fight against the Taliban, Jaish Ul-Adl, Jaish-e-Muhammed, Lashkar-e-Taiba and like these primitive bombers still all hot. India has the military means to explain to the Pakistanis in a less friendly way that things cannot go on like this. In the end, Pakistan is still a failed state, but one with atomic steroids. In this respect, it's a game with fire.

Pakistan’s fostering of terrorism leads to growing isolation
But friendships with China, Saudi Arabia and the Taliban give it a lifeline

Feb 23rd 2019
Visitors to the bird markets of Pakistan would have found stocks depleted this week. To welcome Muhammad bin Salman, the crown prince of Saudi Arabia, who swept in for a two-day visit on February 17th, they freed 3,500 pigeons, cleaning out avian bazaars across the country. To make the crown prince feel at home, a parliamentary delegation presented him with a gold-plated submachine gun. Yet as Pakistan firms up one relationship, others are crumbling. In recent weeks, three of its neighbors — India, Iran and Afghanistan — have accused it of fostering cross-border terrorism.

On February 13th a bomb-laden lorry killed 27 members of Iran’s elite Islamic Revolutionary Guard Corps (irgc) in the south-eastern province of Sistan-Baluchistan. Iranian officials said that the bomber and other plotters were Pakistanis, and that the attack was planned and launched from Pakistani soil. An irgc commander warned that if Pakistan does not “do its duties”, Iran will fight “the terrorist groups organized by regional and extra-regional intelligence services” —an allusion to the isi, Pakistan's spy agency, and to those of America, Saudi Arabia and Israel.

The next day Jaish-e-Muhammed (jem), another jihadist group, based in Pakistan’s Punjab province, claimed responsibility for a suicide-bombing that killed 44 soldiers in Indian-administered Kashmir. And on February 15th Afghanistan wrote to the un to complain that Pakistan’s overt meetings with Taliban leaders, part of wider American-led talks, were “a violation of the national sovereignty of Afghanistan”.

Pakistan now finds itself in a diplomatic pincer. On February 17th Sushma Swaraj, India’s foreign minister, unexpectedly turned up in Tehran. "We agreed on close co-operation to combat terrorism in the region," tweeted Iran’s deputy foreign minister. "Enough is enough!" And on February 19th Prince Muhammad traveled on to New Delhi, where India’s officials tried to persuade him that its economy was a bigger prize than Pakistan’s friendship.

https://www.economist.com/asia/2019/02/23/p...owing-isolation
Small underdeveloped Pakistan has around 150 nuclear bombs. That's around ten more than India, according to FAS.org. An interesting balance of power.

In view of the desolate situation in Pakistan, these weapons are likely to be stored in very limited rooms, most likely the core should be stored separately from the rest to make the theft of a complete weapon even more difficult. This means that no nuclear weapons should be operational 24/7. But, in the last 10 years, smaller tactical nuclear warheads have also been introduced, making the threshold for the use of nuclear weapons much lower. At the same time, the theft of such a weapon is also made easier. I hope, despite all the muscle games between India and Pakistan, it will never get to the point where these weapons ever leave the camp.
Do you have a source for the numbers, preferably from FAS? I can't find anything right now. However, the website is no longer entirely modern.

On the other hand, the Bulletin of the Atomic Scientists speaks of (only) 70–90 warheads, but fissile material for (another) 90 warheads.

The Pakistanis may (hopefully) have hyper-compartmentalized their nuclear arsenal. They know their Pappenheimers and don't want to give individual actors too much power, which is a good idea even in functioning democracies. But apparently there is a nuclear force that is always ready for action, at least in the form of mobile ("road-mobile") cruise missiles and short-range ballistic missiles on TEL. These systems were introduced in 2008 at the latest - they were shown to the public at the time - but possibly too new for the FAS website. The aim is of course to build up a nuclear second strike capacity, without which a nuclear program can actually be entirely given to oneself.
As a gesture of peace, the Pakistanis want to release the captured Indian:

From Adeel Raja in Islamabad 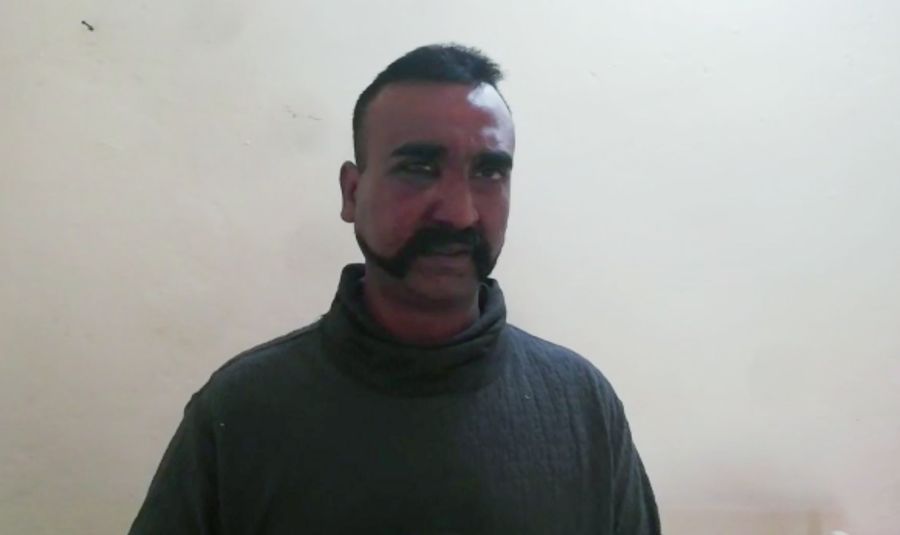 Pakistan said that on Friday it would release the Indian pilot who has been in Pakistani custody since his plane was shot down on Wednesday.

“We are releasing the Indian pilot tomorrow as a gesture for peace,” Prime Minister Imran Khan said in a televised address Thursday.

Do you have a source for the numbers, preferably from FAS? I can't find anything right now. However, the website is no longer entirely modern.

The site is not that old-fashioned and the numbers are from last year.
https://fas.org/issues/nuclear-weapons/stat...nuclear-forces/

As a gesture of peace, the Pakistanis want to release the captured Indian:

Did the black eye come from getting out of the ejection seat?
There is a video that shows that a Pakistani mob hits the pilot several times. He was then taken away by Pakistani security forces with bloody faces.
Abolition of the autonomy status of Kashimir, SPON:
The Delhi decision has an immediate impact on the Kashmiri people. A curfew has been imposed in the region and telephone and internet services have been suspended. Overall, the most recent raids are supposed to be there more than 560 people arrested have been. As reported by the newspapers "Trust of India" and "Indian Express", university professors, business leaders and activists were among those arrested. They became accordingly taken to makeshift prison camps.
[...]
Pakistan expelled the Indian ambassador and suspended trade with India.
Isn't the news a day late? Meanwhile, the media reports that Pakistan and India are trying to smooth things over again.
This is a simplified representation of our main content. To see the detailed full view with formatting and images, please click here.
<?