Why is piracy not widespread in the world?

Does West Africa need help in the fight against pirates?

For a time the pirates in the Horn of Africa were particularly notorious among seafarers. However, nine out of ten ship hijackings are now reported from the other side of the continent: from the Gulf of Guinea. It stretches over 6000 kilometers from Angola to Senegal.

While fewer and fewer crew members are being kidnapped by pirates around the world, the trend in the Gulf of Guinea is the opposite: there the number doubled from 2018 to 2019 to 121. In the fourth quarter of 2019, all four of the worldwide registered ship hijackings occurred in the region, as well as ten of the eleven Ships that had come under fire. Somalia, on the other hand, did not report any pirate incidents, but the International Maritime Bureau (IMF) in London advises caution.

"Seafarers go through great dangers so that consumers can buy coffee and cocoa in the supermarket or fill up their cars," said Cyrus Mody, deputy director of the International Maritime Bureau of the International Chamber of Commerce (ICC). "The numbers in the Gulf have not increased," he says soberly in an interview with DW. "The media are now reporting more about it since the situation in the Horn of Africa came into focus. In the Gulf of Guinea, only around 50 percent of the incidents have been reported, and piracy has been going on for years." 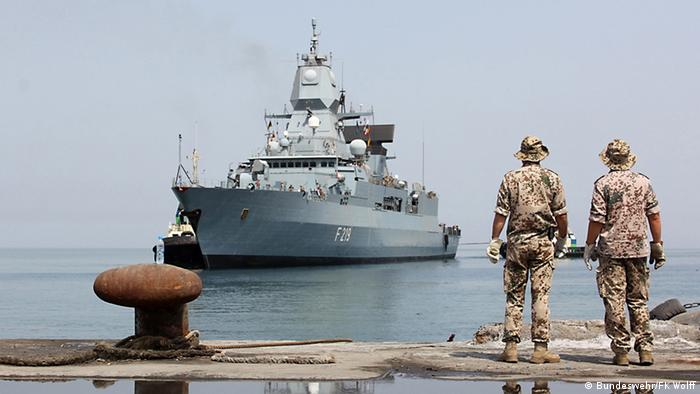 German frigate "Sachsen" in Atalanta mission: Not interested in an additional naval mission?

Pirates primarily target ships with international crews, according to a report on piracy in the Gulf of Guinea by the US shipping authority MARAD. In December, pirates boarded two ships 100 nautical miles off the coast of Nigeria and Benin within a few days. They kidnapped 19 and 20 crew members respectively. "Since 2018 there have been a quarter fewer attacks on ships, but more kidnappings," says Wolf Kinzel, frigate captain and expert on maritime security in the region at the Science and Politics Foundation (SWP). "The pirates' approach has changed: instead of three sailors, they take the entire crew with them. Hostages for money."

But why are the neighboring countries not getting the situation under control? The problem is that they lack the knowledge, training and resources to deal with the situation, says Vice President Mody. "If an attack occurs in the waters of a country, it is armed robbery and is the responsibility of the state. Only when something like this happens in international waters is it piracy and can be combated by the community," said Mody.

According to the UN Convention on the Law of the Sea of ​​1982, the twelve nautical mile zone (one nautical mile is approximately 1.85 kilometers) belongs to the national territory. Cooperation between states would be made more difficult by bureaucracy. Security guards are not allowed to drive from one territory to another in pursuit of pirates without letting the neighboring country know beforehand. "Until the bureaucracy is settled, the pirates are gone," says Mody. "Because of a lack of law enforcement, the waters are becoming a playground for criminals."

According to SWP specialist Kinzel, the basic problem is not at sea. "In recent years, the main area of ​​piracy has been the coast of Nigeria, a region where there is no statehood on land." The high level of environmental pollution from oil production barely allows the fishermen and cattle herders to live. Then there would be smuggling, ethnic and religious conflicts and terrorism. And youth unemployment. 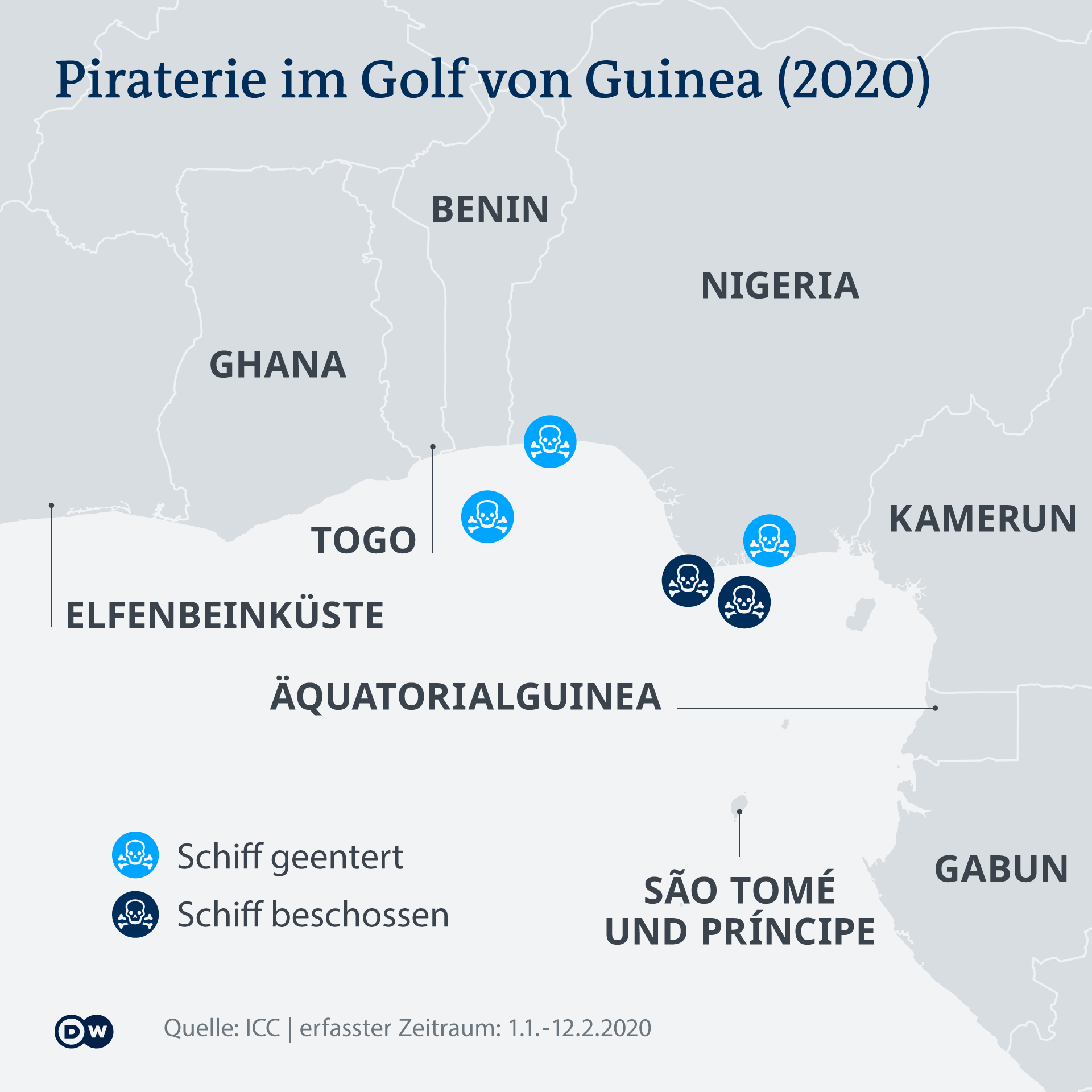 In a study, Kinzel writes: "A lack of prospects, the lack of consequences due to inadequate criminal prosecution, corruption and thus an entirely understandable lack of trust in state actors create the best conditions for piracy." In an interview with DW he put it in concrete terms: "People feel that they are being exploited and are using their seafaring expertise to engage in piracy. To combat the problem, something must be done against environmental pollution and for statehood, education and health care."

No second horn of Africa

In the Horn of Africa, the international community has taken on the problem: since 2008 ships and aircraft have been patrolling the coast of Somalia as part of the EU Atalanta mission. However, as the link between the Indian Ocean and the Red Sea (and thus the Mediterranean), the region is also one of the busiest and therefore most important shipping routes in the world.

Kinzel estimates that Germany is not interested in an additional naval mission in the Gulf of Guinea: "The Horn of Africa involves large flows of goods brought from Europe to Asia. In West Africa, most of the raids take place on the sovereign territory and ports of the countries the nations themselves have to intervene. " 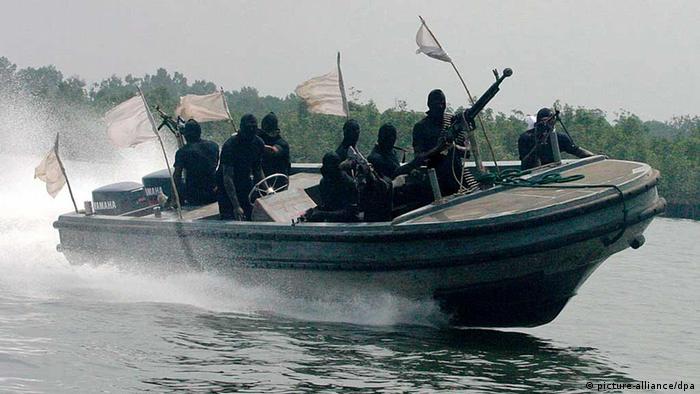 Pirates in the Niger Delta (2007): Pollution as a trigger

Even so, Mody emphasizes that international missions are extremely important. "They enable the exchange of information and knowledge between countries that have resources and those who are struggling with these crimes. International missions are not allowed within the territorial waters. But with their help they can carry out exercises for the coast guard to train them how to react to a robbery or how to arrest pirates. In addition, they can raise awareness of the issue in the local community. "

The responsibility of the countries

There are already approaches. For example the code of conduct that the countries bordering the Gulf negotiated in the so-called Yaoundé process in 2013 in order to guarantee maritime security among themselves in the Gulf of Guinea. "Since the Yaoundé process in 2013, all the countries of West Africa have come together to make the sea area safer. They have set up zones where ships can make their emergency calls so that the national navies can respond," says Kinzel. In addition, the United States has carried out the "Obangame Express" exercise annually since 2010 to improve the capabilities of states in West Africa to combat illegal activities at sea.

The European Union has also been involved in a local training program since 2013, France even since 1990. "Give a man a fish and he'll eat a day - teach him to fish and he'll eat his whole life," says Mody. An international mission only works as long as there is a budget for it. In the long term, only the states on the Gulf of Guinea themselves, armed with the right resources, can fight piracy.