What is the truth behind the murder of King Birendra

The drama of the Nepalese royal family, presumably the king of Nepal and his family were killed by their own son. The murder is still not completely resolved.

It is still incomprehensible why this tragedy took place and in Nepal many people cannot accept the rumors. However, it actually looks as if the son murdered his parents, siblings and other relatives after an argument, because now named witnesses have also come forward. The new King Gyanendra gave a commission until Monday 11.6. to ascertain and publish the "truth". This date has been extended to Thursday, June 14th. After questioning over 150 witnesses, the commission came to the official conclusion that it was indeed the Crown Prince Dipendra. This conclusion was accepted by almost all parties, only the Maoists continue to speak of a foreign plot. Life has returned to normal in Nepal.

The royal family, in the middle Crown Prince Dipendra 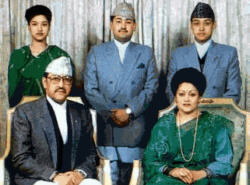 From many personal conversations in Nepal I know that almost all Nepalese, including communists, respected and revered the old King Birendra in contrast to the political parties. He was like a bracket. What impact his death will have on this country with its almost unbearable social tensions cannot yet be foreseen. Some suggest it will strengthen the military, not necessarily a good omen. While the former king was opposed to the use of the military against the Maoists, who already have some power in the extremely poor rural areas in the west, it is assumed that the new king is more in favor of this.

The Queen started walking again for the first time and is slowly recovering from the gunshot wounds. The newspapers only write about the usual little things.

The Federal Foreign Office is changing its travel warning to a general safety notice.

Contrary to many fears, the situation has remained calm since the report was published. While the why is still being asked, most seem no longer to question the rendering of the flow for lack of credible alternatives. The largest opposition party, the CPN-UML (Communist Party Nepal-United Marxist Leninist) commented positively on the report, even though it describes the government's role as an incompetent bystander. The Maoists continue to speak of an imperialist three-visionist conspiracy. The Nepalese newspapers are once again writing about the usual.

After hearing 150 witnesses, the commission comes to the official conclusion that Crown Prince Dipendra ran amok while drunk and murdered his parents, sister and other members of the family. He is not directly referred to as a murderer in the report, but he would have fired all the shots. Rumors have already said that the Crown Prince was at odds with his parents because they did not want to allow him to marry the woman he wanted and offered him the alternative of renouncing the throne. It is also reported that Dipendra disagreed with his father about how to deal with the Maoists and that he called for a tougher line.

The commission has not yet completed its investigation and has received an extension of 4 days to Thursday, June 14th.

For the first time, a witness by name tells the story. He repeats the version that the Prince Dipendra had come to dinner drunk and was sent away by the King to sober up. Two hours later he came back in battle uniform and wreaked havoc with several automatic weapons.

Dipendra is burned in Pasupatinath. The opposition refuses to send its chairman to the commission. This is now formed by the Chief Justice Kesav Prasad Upadhyay and the Speaker of Parliament Taranath Ranabhat.

. Dipendra dies early in the morning. Gyanendra is crowned the new king. More major riots and a curfew. Gyanendra promises an independent investigation. The commission should include the chief judge, the prime minister and the opposition leader (moderate communists).

Crown Prince Dipendra, who is kept alive in intensive care, is named king, although he is still believed to be the killer. Gyanendra publicly states that it was an accident in which an automatic weapon went off by itself. This version meets with widespread disbelief. Outraged demonstrators are demanding that the perpetrators be investigated and punished. Meanwhile, many also doubt that Dipendra could be the killer and suspect some kind of conspiracy. Many suspect that the truth will never come out.

Prince Gyanendra, the king's younger brother, is temporarily given responsibility as regent, as Crown Prince Dipendra is still in a coma. King Birendra and Queen Aishwarya are burned on the bank of the Bagmati in Pashupatinath.

King Birendra, 55, his wife Queen Aishwarya, his daughter and other members of the family are shot dead at one of the royal family's gatherings every Friday. His youngest brother is seriously injured. First rumors say that the murderer was Crown Prince Dipendra, who turned the gun on himself after the bloodbath. He survived but is in a coma. The middle brother is not at dinner because the helicopter could not take him from Pokhara to Kathmandu due to bad weather, but his wife Princess Komal is wounded.

King Birendra on a 10 rupee note 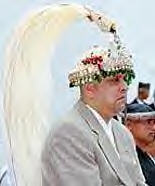 Even at birth, the astrologers predicted two coronations for the prince. He had actually been crowned king once at the age of 3. His grandfather, King Tribhuvan, had joined a revolt against the Ranas clan and had to flee to India for the time being. The Ranas then crowned his little grandson. As prime ministers in the previous century, the Ranas had usurped power and largely disempowered the kings of the Shah dynasty. The king was able to regain power in Nepal and return with the help of India. .

The king Gyanendra is considered to be more conservative than his murdered brother Birendra. It should be noted, however, that eleven years ago, Birendra only gave his consent to a parliamentary democracy after 500-1000 deaths and has since become its guarantor.

The new king has so far been noticed primarily as an environmentalist and has promoted and supported many environmental protection projects in Nepal. Since 1994 he has been the chairman of the King Mahendra Trust, the semi-governmental environmental organization in Nepal, which also includes the Annapurna Conservation Area Project and the national parks.

A big problem is his thirty year old son. He has already twice caused a fatal road accident while drunk, from which a popular singer died, among other things. As a member of the royal family, he was not prosecuted any further. The son is deeply hated in Nepal and his behavior was one of the talking points at the June 1st meeting. He escaped the massacre unharmed, which in turn fed the wild rumors of a conspiracy further.