Snoring and sleep apnea: when sleep can become unhealthy

Stress and too many thoughts in the head can make it difficult for us to fall asleep. The result is often a lack of sleep. But whoever sleeps too little or badly over the long term becomes tired, listless and more susceptible to infections. In addition, the lack of sleep increases the concentration of the stress hormone cortisol, which causes blood pressure to rise. In addition to these effects, which can be triggered by a lack of sleep and sleep disorders, your sleep can also be negatively influenced by other disorders and lose its regenerative function for body and mind.

Snoring - nocturnal breathing sounds that can be dangerous 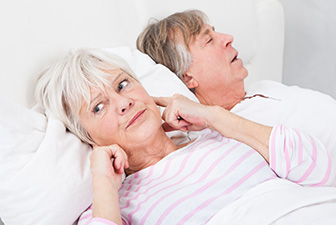 Many people who spend the night alone in a room have no knowledge that they are suffering from it: Initially, snoring only bothers those who have to share the bed or the room with an affected person. But the rattling breath can also affect the health of the snorer. People who snore sleep more restlessly and often feel listless or tired during the day.

Often, sleeping on your back, heavy meals and the consumption of alcohol in the evening, being overweight or dry air are the reasons for the typical breathing noise: In 20 percent of all snorers, the soft palatal arches and the uvula lower from above when lying on your back. When you inhale, both begin to vibrate and the typical snoring sound arises. In another 30 percent, the tongue falls back a little while sleeping, thereby blocking the airways. All other affected persons suffer from a hybrid form in which the place where the snoring occurs cannot be clearly defined. A snoring mouthpiece can help by opening the mouth slightly at night and thereby helping to allow unhindered air flow. A nasal spreader, on the other hand, can make nasal breathing easier by gently securing the opening of the nose.

The consequences of snoring can be far more far-reaching than meets the eye. The sound of breathing can not only be the reason for separate bedrooms, but also increase the risk of cardiovascular disease. Snorers are twice as likely to have a stroke as non-snorers. In addition, the restricted air flow can lead to a lack of oxygen in the blood. Often, snoring also causes nocturnal breathing pauses, the so-called sleep apnea.

To prevent snoring, there are a few tips you can consider:

Avoid alcohol and heavy food: Drinking alcohol relaxes the muscles and can lead to short-term respiratory blockages, which are harmless but encourage snoring.

Refrain from smoking: it irritates the mucous membranes and can hinder breathing.

Support your healthy sleep with acupressure: You can wear an acupressure ring comfortably on your little finger while you sleep. He presses on two acupressure points and can activate two meridian lines that can alleviate snoring.

Reduce your weight: Being overweight can make snoring easier - accumulations of fat in the throat can narrow the airways and trigger the typical noise when breathing.

Ventilate your bedroom: Dry heating air can irritate the mucous membranes and lead to increased snoring. You can counteract this with a bowl of water or a humidifier. Drink a lot and use seawater spray and marigold ointment if you have symptoms to keep your nasal mucous membranes moist.

Support your mucous membranes: A salt steam bath can cleanse the nasal mucosa before going to bed and loosen mucus that otherwise blocks the airways. To do this, dissolve a spoonful of salt in a liter of boiling water and inhale the steam with your eyes closed for 15 minutes. Alternatively, a salt inhaler can help clear the airways easily.

Avoid lying on your back while sleeping: In this position, the roof of your mouth, uvula or tongue can fall back and cause snoring. You can stabilize the side position with a side sleeper pillow or a flexible millet pillow in the back. A sleep vest is particularly reliable in keeping you in the right position, as a foam protector on the back prevents it from turning.

If your symptoms persist, have a doctor clarify them: An allergy, chronic sinusitis or a curvature of the nasal septum can hinder nasal breathing and be a cause of snoring. In addition, nocturnal breathing pauses can be detected in the sleep laboratory.

What can you do about snoring?

Similar to snoring, affected people usually do not notice the brief nocturnal pauses in breathing known as sleep apnea. However, the partner can be very worried about the symptoms. In the middle of your sleep, often announced by snoring, your breath pauses for a few seconds until the body sounds the alarm and briefly wakes you to breathe. The consequence of the pauses in breathing is a lack of oxygen in the brain, with which stress hormones are released and the blood pressure rises: The risk of a stroke, cardiac arrhythmia and a heart attack increases.

Sleep apnea is when the sleeper experiences more than five pauses in breathing in an hour, each of which lasts longer than ten seconds. Even if those affected do not notice the pauses in breathing during the night, nighttime sleep apnea has an impact on the following day. You feel tired, do not perform as well, and have difficulty concentrating. The affected people often suffer from microsleep and keep nodding off for a brief moment.

What can you do to reduce sleep apnea? You should also take the above tips against snoring to heart with sleep apnea: Reduce excess weight, refrain from alcohol consumption and quit smoking, as all of these factors can lead to pauses in breathing. Have your symptoms - especially if they are accompanied by snoring - clarified by a doctor, because different parameters can be recorded in a sleep laboratory that reveal abnormalities and dropouts.

Often, wearing a breathing mask at night can avoid sleep apnea: Air is blown into the mouth and nose via the so-called CPAP mask, which prevents breathing pauses with a slight overpressure. If sleep is permanently disturbed and the mask does not provide any relief, tongue implants can be a solution. In an operating theater, thin rods are inserted into the base of the tongue to stabilize the tissue - it can no longer slide so far into the throat and flutter when breathing. Tongue pacemakers are also used in an operating room and use small electrical surges to tighten the tissue so that it can no longer constrict the windpipe.

Make sure you have a sound sleep, good sleep hygiene and a bed that suits your needs so that you can wake up well rested in the morning.