Quora is hosted on Amazon EC2 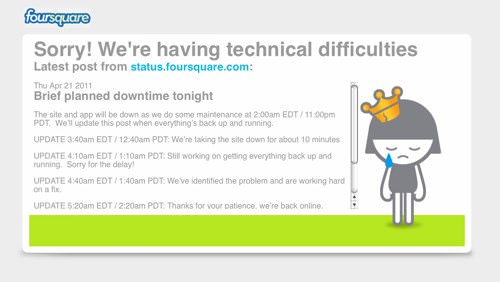 Colorful failure: Foursquare founder Dennis Crowley is currently explaining the future of his check-in service to Robert Scoble in an entertaining interview. We give him some advice here: Maybe he shouldn't rely too much on Amazon's EC2 cloud storage. Because it was down for several hours today and tore down startups that hosted their projects on it. At least, and that's the nice thing for us: All services responded with colorful outage images. Twitter's famous Failwhale was just the beginning. We have put together a small collection of today's failure pictures.

Foursquare (above) shows a girl crying and provides constant updates about the problems online. The website was offline for a while, then back on, then apparently a decision was made to take it offline again for maintenance. Now she's running again. The question-and-answer portal Quora responded with humor and a funny video. Here the readers were informed: "We could point our finger at someone, but without EC2 we would not be where we would be today." 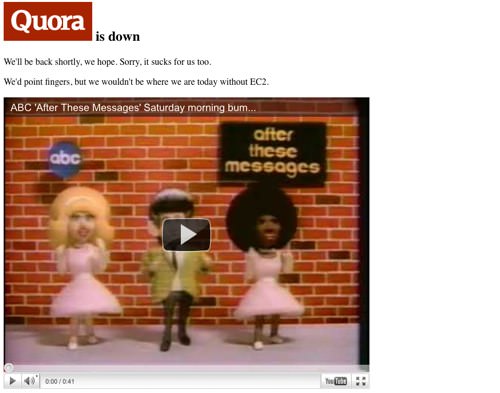 The side has been struggling with outages the longest. In the end, not even the failure message was online anymore. Mobypicture, on the other hand, used the failure to advertise a little for itself. Below a detailed bug report, the designers wrote: “Wait, can't do it yet!” And pointed out an event in Amsterdam that they would be there. 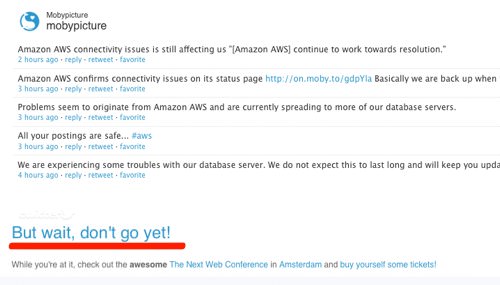 Register now for our weekly BT compact newsletter. As a thank you we give you ours LinkedIn guide. 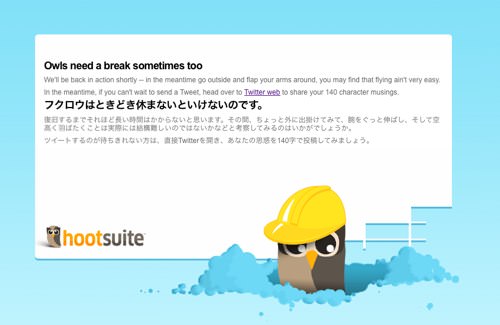 The social bookmarking service Reddit, on the other hand, had no problem putting all the blame on Amazon:

According to Amazon, the reasons for the failure are connectivity problems and latency in a data center in Northern Virginia. One continues to work on a solution. As I write this line, some of the services mentioned are available again - others remain offline and some of them can no longer be reached.