Is China happy with Russia?

Summary
The article shows the development of the subjective well-being of the Russian population from the 1990s to the present. It shows an unprecedented collapse in life satisfaction in society in the course of the crisis of the 1990s as well as the slow improvement with the subsequent economic growth. The continued rise in national happiness levels after the 2008 economic crisis can be explained by factors such as national pride and religiosity.

Life satisfaction refers to material aspects of subjective well-being and reflects an individual's satisfaction with the objective features of his or her life. In surveys, life satisfaction is measured by asking »How satisfied are you with your life overall? (mark on a 10-point scale) «measured. Happiness, on the other hand, is mostly related to a person's emotional state and is usually measured by asking, "How happy are you now?" Thus, life satisfaction can rather be viewed as the result of a personal evaluation process that also includes material and social goals and achievements. Happiness, on the other hand, is viewed as the result of a person's positive experiences, especially in close personal relationships.

Similar approaches are used in nationwide surveys in Russia to measure people's life satisfaction and happiness. Earlier cross-national studies based on “World Value Services” show that there is a considerable range of levels of happiness worldwide and that economic development is closely related to the level of happiness in the respective country.

According to Ronald Inglehart's theory of modernization, all societies on their development paths go through similar changes at the social level over the decades. These are associated with individual changes in values. Top priority values ​​such as economic and physical security are being replaced by values ​​of self-development, whereby participation, freedom of expression and quality of life stand out. When there is a shortage of consumer goods, people concentrate on vital needs and give top priority to economic and physical security. When people are made to feel existential security, economic development causes them to shift the emphasis on survival values ​​towards self-expression and free choice, which is a more direct route to maximizing happiness and life satisfaction. The emphasis on freedom increases with economic security, to the point where free choice is valued as much as economic security.

Life satisfaction and happiness in Russia

Russia provides an interesting example: here we can see a sharp drop in subjective well-being in the 1990s, a difficult recovery in the 2000s, and stagnation in the 2010s, in exact agreement with the above theory; Due to the very substantial shocks caused by the collapse of the Soviet Union and the massive economic crisis, values ​​shifted back to a priority of economic security. We can try to understand what happened to happiness in Russia two or three decades ago and how people rate their satisfaction with life today.

After the collapse of the Soviet Union, Russia experienced a variety of social and economic shocks during the 1990s. Real per capita income fell by 43 percent and the unemployment rate rose to 14 percent. The average wages were below 100 euros a month and were often not paid. This forced many to survive with the help of the vegetable and fruit production from their own garden.

Alongside this economic collapse, Russia in the 1990s saw a number of social problems such as an increase in alcoholism, drug addiction and murder, as well as an explosion in divorce, social inequality, corruption and organized crime. From a high of almost 65 years in the Soviet era, life expectancy for men had fallen to less than 58 years by 1995. It is therefore not surprising that between 1982 and 1999 these circumstances resulted in an unprecedented decline in subjective well-being.

After 1989, Russia was a rare example of a society that had experienced a reversal towards vital values: existential security declined and life became more precarious. The extraordinary decline in economic living standards, physical security and public health over the course of the 1990s has consistently led the citizens of Russia to return to private material needs and worries, which was associated with a phenomenal decline in subjective well-being. This dynamic is also impressively demonstrated in the time series on suicides, which document a considerable crisis for the period from 1982 to 2004, which was followed by a gradual recovery (Foa et al 2018).

The Russian economic and health monitoring (RLMS-HSE), which has been collecting data from a long-term household survey every year since 1994, allows us to track the development of four important indicators: 1) general life satisfaction; 2) satisfaction with current personal financial situation; 3) the degree of fear of not being able to meet the basic needs of the family; and 4) life assessment for the future. Figure 1 on p. 5 clearly shows the changing development of these indicators from 1994 to 2018. All figures are average values ​​for the population group of 15-65 year olds, on a scale from 1 to 5, with 1 being the minimum (at all not satisfied with the general and financial life situation, not afraid of no longer being able to cover the basic needs of the family, very bad life in the future) and 5 the maximum (correspondingly very satisfied, very afraid, very good life).

The central indicator of general life satisfaction, which had the lowest values ​​in 1998 and 2000, then rose continuously, so that in 2017 a maximum value of 3.75 points was reached. Satisfaction with the financial situation, which could well explain the subjective well-being, was only measured from 2000 onwards, which is why we do not have the opportunity to track the changes over a longer period of time. Nevertheless, we can see that it has increased over the last two decades, with a peak in 2012. The indicator of fear of not being able to meet the basic needs of the family shows a similar pattern, with the lowest values ​​in 2011. The evaluations of life for the future had a positive development until 2012, after which they slowly declined. The unique data of the World Values ​​Survey offers the longest investigation period for Russia, whereas the national data of the RLMS-HSE (Figure 1) allow a more detailed measurement of well-being.

It should be mentioned here that there are great differences between the different generations with regard to the development paths of subjective well-being. A cohort analysis of the samples in post-communist countries shows not just a return to the mean, but also a generation change as an explanation for an increase in subjective well-being since the mid-1990s (Foa et al. 2018). Indeed, the millennial and younger generations in Russia (known as Generations Y and Z) are considerably happier than older generations (Kolosnitsyna et al. 2017, Radaev 2019). However, recent intragenerational and cohort studies show that there is a slightly negative development in life satisfaction, namely with regard to the fulfillment of their expectations in life. That could indicate a further decline in happiness levels in Russia in the future.

The extensive literature on happiness and life satisfaction has shown that in many countries lower age, good health, employment, religiosity, trust and better income are associated with a higher level of subjective well-being.

There are not too many differences between European countries and Russia when it comes to the explanatory factors for individual happiness. As for the group of post-Soviet countries, the conclusion could be that the rapid change in the value system towards individualistic values ​​and self-actualization sets Russia apart from the countries in Central Asia or the Caucasus, where traditional family values ​​still prevail. That would explain the lower overall level of life satisfaction and the paradox of a slightly better economic situation in Russia with lower averages for happiness. At the same time, traditional values ​​such as having a life partner are still very important in Russia, especially among the elderly and employees.

Material well-being and income inequality are directly linked to happiness and life satisfaction in Russia. Previous studies have shown that the increase in happiness in the early 2000s could be explained by rising wages and salaries and national economic growth, which in turn also had its influence on positively developing future expectations. After the economic crisis of 2008 the following question arises: Why did the national level of life satisfaction continue to rise even though real incomes fell and the economic situation was no longer so good? Why do we not see a decline in happiness in 2008 - 2009, but a continuously rising curve?

Another explanation for the increased subjective well-being despite the deteriorating economic situation could be found in studies examining the effects of religiosity on happiness in Russia. Religiosity has increased since the early 2000s; more and more churches are being built. In addition, there has been close cooperation between state authorities and the administration of the Orthodox Church for some time. The latest studies, for example by Elena Melkumyan, show that belonging to the church promotes the formation of social capital, which is ultimately positively linked to happiness and life satisfaction.

The most important conclusion of this article can be formulated as follows: In Russia, life satisfaction and happiness on an individual and societal level were significantly and sustainably influenced by the overall development of society, including the traumatic end of the Soviet Union and the subsequent difficult economic transformation. The collapse of communism was followed by a sustained decline in subjective well-being among the elderly, which was never entirely made up for - unlike the younger generations, who grew up with different expectations and hopes for their lives. However, at the same time, especially among this younger generation, there has recently been a lower level of life satisfaction, which is due to unfulfilled life expectancy, a deterioration in the economic situation, increased work pressure and an intensified one Work-life imbalance in both men and women in Russia.

Overall, the fluctuation in real income in the period from 2008 to 2012 does not play a major role in the life satisfaction of citizens in Russia, as it is compensated for by a stronger focus on the church and national pride. 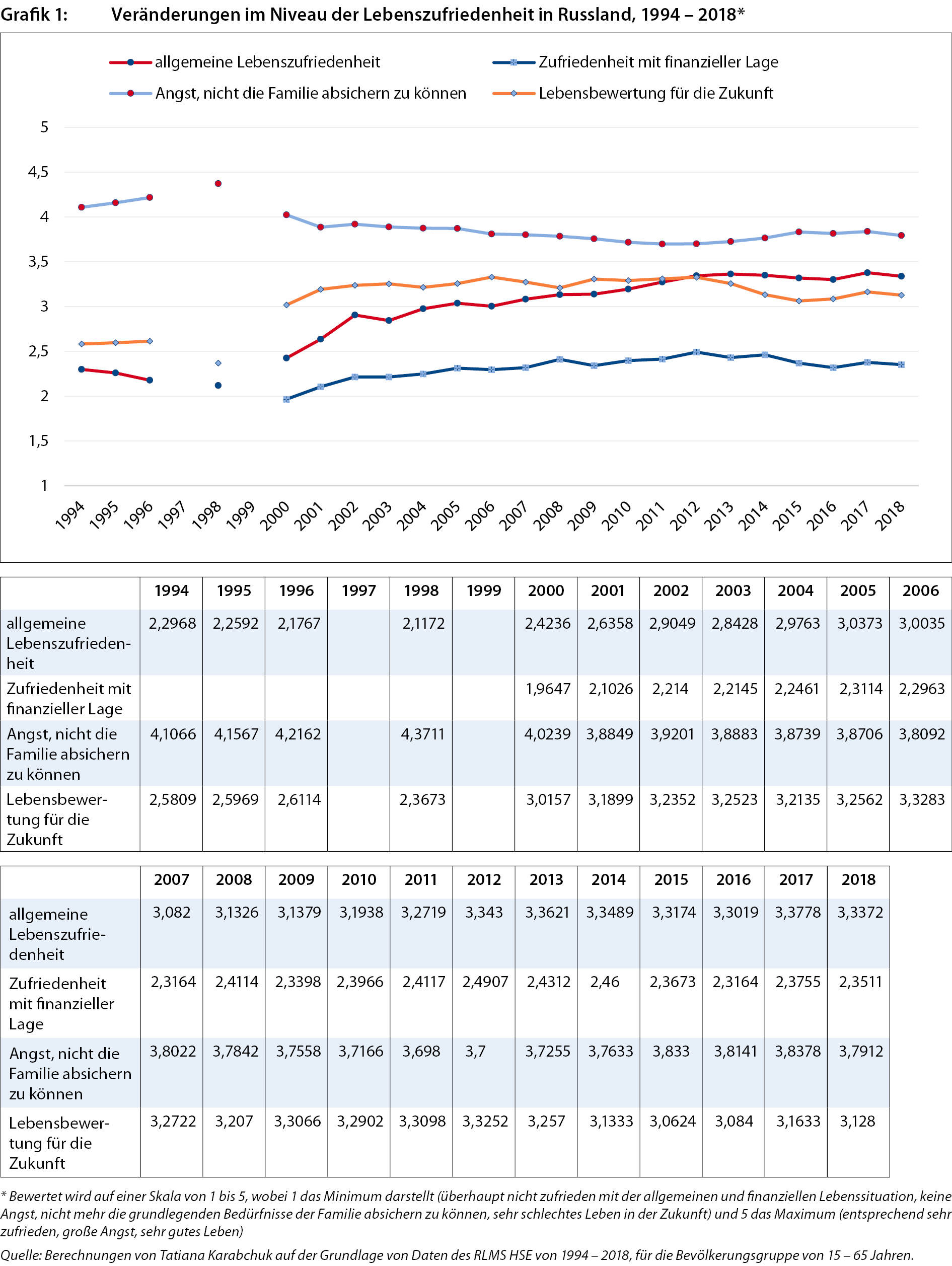