Where does intelligence fail?

How does artificial intelligence influence the way we write, paint or make music? | Illustration: © Goethe-Institut

The project "Kulturtechniken 4.0" of the Goethe-Institut in Australia examines the interaction between artificial intelligence and traditional cultural techniques. In an interview, non-fiction author Thomas Ramge discusses whether we are forgetting how to write due to technological progress.

How do you use Artificial Intelligence (AI) yourself in your everyday life and in your work?

Thomas Ramge: I use AI in my everyday life like most people: via my smartphone and many applications in this smartphone, from Google Maps via the search function, or the recommendation algorithms for online shopping that are fed and operated by machine learning. In this respect, machine learning, i.e. so-called AI or the most important sub-discipline of so-called artificial intelligence, has crept into our lives in almost every form of use of digital technology. 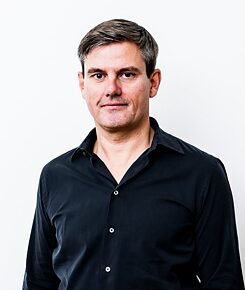 Non-fiction author Thomas Ramge. | Photo (detail): © Peter van Heesen I benefit greatly from AI when I write English texts. Then I not only use the correction form of Word, but also use a service called Grammarly, which also intelligently checks the grammar and provides intelligent improvements to non-native speakers. This is an example of using machine learning. For my last book, I also tried, with very prominent and competent support, to consider whether AI could help to write a book that reflects on AI; but the AI ​​failed miserably. As humans, we can take this as a reassuring sign; at least I do.

Thomas Ramge: Perhaps less than the question implies. First of all in my mother tongue: not very strong. But AI is changing writing by making information more accessible. That means that before every writing process there is first a research process. And in this research process, especially if it is fed online, there are mechanisms of artificial intelligence that perhaps better draw my attention to information or to texts or contexts that would otherwise slip through my fingers. It is a help function to get faster or more comprehensive information. I do not perceive it in such a way that this AI, if it is used systematically and well to help in collecting information, would be a filter that withholds a lot from me, or sends me into a filter bubble per se. Such an impact can of course come from social media. But for me as an author I would see the help in collecting information as a helpful function: as an aid in navigating the world of incredibly diverse information. This navigation is easier with AI than if I had to do it without this machine support. During the writing process itself, at least in my mother tongue, I don't see any direct influence from artificial intelligence or machine learning at first.

Is it different when you write in foreign languages?

Thomas Ramge: When I write in French or English, I perceive AI as a support, as an intelligence or writing reinforcement, because I look carefully at what suggestions I get. Then I already have the competence to say: “Okay, this suggestion is an improvement, this one is not; but I wouldn't have thought of it myself. ”And I notice that these programs even help me to improve my writing in the long term. I notice that I get fewer and fewer offers of support, so I no longer need them. In this respect, AI can also be something of a trainer when it comes to writing.

In my book “Postdigital” I cite the example of an AI trainer for chess who helps to eradicate weaknesses in the game of chess. The same thing happens when you study math. I believe that this trainer function is also possible when writing, especially when writing in a foreign language. At the same time, the question arises: Is this cultural technique, the craft of writing, no longer learned so deeply in elementary schools? And then under certain circumstances - like my now twelve-year-old son - do you come to the point that you rely on the spelling and grammar corrections without checking? Or then in the next step: I want to say something like this or that, write something down and see what the AI ​​suggests, after which I only need to click on this suggestion. This leads to a world in which the actual cultural technique of writing is no longer learned deeply enough. As a result, the AI ​​can no longer act as a trainer, and everyone stagnates at a relatively low level.

In other words, AI is a useful tool for you, but you definitely see dangers for the future of the cultural technique of writing?

Thomas Ramge: Yes of course. We are practically the last generation - or maybe there will be another generation after that - that grew up without this possibility of strong writing assistance. But those AI assistants are here now, mostly in English. In German, the programs are slowly following suit, even if these assistance systems in English are much better than those for German. You come to a point where someone who cannot write very well can be raised to a decent writing level with machine assistance. And then the exact question arises: are we no longer learning the basics? In order to get one step higher, it will probably always be the case that you have to master this cultural technique of writing very deeply. But for what proportion of the writers is a lower or middle level enough to be raised to a decent level by a machine? And what repercussions does all of this have on teaching and learning, and on the use of language and writing in depth? It shouldn't get so far that writing skills are neglected because you think: To get it done properly, you don't have to be able to do it anymore because there are language assistants.

As part of the project “Cultural Techniques 4.0 - Creativity in the Age of AI”, initiated by the Goethe-Institut in Australia, artists and experts from the field of artificial intelligence examine the interaction between AI and traditional cultural techniques such as writing, composing or painting Magnifying glass. They discuss both the curiosity and the concerns with which we look to a future increasingly shaped by algorithms.