What can be measured in kilometers

Space is full of great distances as well as small ones. But especially the big ones hold secrets that we would love to elicit from him. The dimensions are so huge that you even had to determine your own units so that the numbers don't get too big. Much is so far away that one can only guess. Just imagine that Voyager 1 which was launched in 1977, and is much faster than any car, has only recently reached the edge of the solar system. But between the solar system and the nearest star there will be a much longer journey that would last for many millennia. But the distances pose another danger. Since radio signals propagate at a finite speed, a signal arrives much later than it was sent over greater distances. For example, the signals to the Voyager spacecraft take more than 14 hours. The light from the stars also takes time to reach us. So the image of a star that is 2.4 billion light years away is also 2.4 billion years old !!!

Units of distance in the universe

There are different units to measure the large as well as the small distances that occur in our galaxy.

A journey through the dimensions

We begin our journey through the various size dimensions in the middle of Microcosm and Macrocosm: In humans.

We first move away into the world of the microcosm:

Our journey into the microcosm ends here. 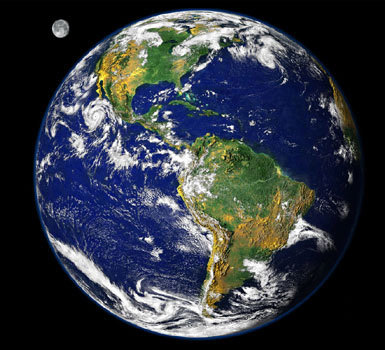 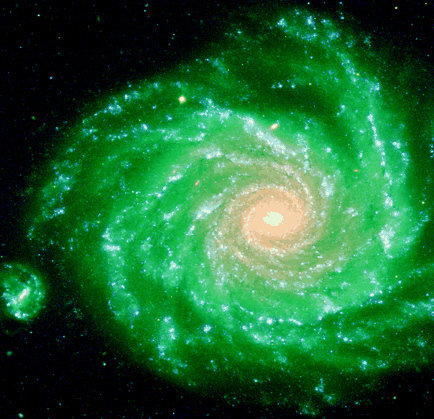 It is difficult to imagine that in these vast expanses of many light years no life has yet been found or perhaps does not even exist. The answer will be a long time coming, as the distances are far too great for today's telescopes.

The offers a journey through cosmic dimensions, during which one can zoom through from the direct surroundings of our sun with the closest neighboring stars to the "edge" of the universe Atlas of the Universe by Richard Powell.

Distance examples in the universe

Now that many have said about distances, here are some examples from our solar system and the rest of the universe:

There are many different methods that can be used to measure distances in our universe.

There are two different procedures:

1) phase shift method
Be there coherent Waves that are thrown back by an object, shifted at least twice by a known value, spatially or temporally, while the intensity is measured at one point. You can then use a suitable formula to determine the difference and thus the distance.

The transit time measurement is used for distances from 0.01 meters up to billions of kilometers. When measuring the transit time, electromagnetic or acoustic waves are directed at a target object. You then measure the time it takes for the signal to be reflected and to get back to the starting point. Since you know how fast the waves are moving, you can use a suitable formula to calculate the distance. It can be used, for example, to determine the distance from the moon. 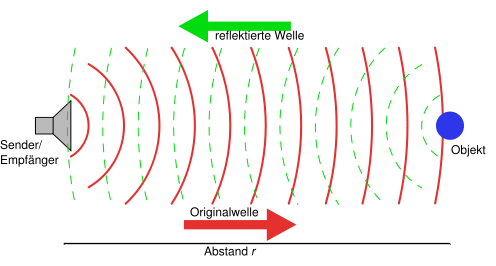 Triangulation is the oldest measuring method and was already used by the ancient Greeks for land surveying.

The principle is quite simple: if you want to measure a point P at some distance, you aim at this point P from 2 points (station 1 and 2). Measure the angles at these two points. If you now calculate the angle difference, you can use the angle sets to calculate the missing lengths, in this case the distance. This method requires only simple mathematical knowledge and can thus be used for lengths of a few micrometers up to distances of a few hundred light years in our Milky Way (parallax).

The principle of parallax is the same as with triangulation, only that here the diameter of the earth's orbit is used as the basis. This allows you to calculate much greater distances. But since the distances are so gigantic, the angle difference is extremely small (less than one Arcsecond!!!), so the measurements must be very accurate. Measurements with the satellite HIPPARCOS are again by a factor of 4 more accurate than measurements from the ground.

Distance measurement with the help of Cepheids

Cepheids are a class of variable stars in which the luminosity changes periodically. With the help of Period-luminosity relationship one can deduce the absolute brightness. The ratio of distance and luminosity obtained in this way is then used, as in the case of supernovae 1a, to determine the distance of other objects, for example a galaxy, in the vicinity of the Cepheid.

Since the radiation of a type 1a supernova is fed by radioactive decay, from nickel to cobalt and finally to iron, the shape is the Light curve always the same. They are observed in distant galaxies and the supernovae are used as Standard candlesto pinpoint distant galaxies in the universe with relative accuracy. You know which ones absolute brightness the supernova must have and can derive the distance by comparing it with the measured brightness.

Our universe is expanding. As a result, like a yeast dough with raisins, the galaxies move away from each other. Because of this, the light waves that are emitted by the stars or galaxies are pulled apart and the light spectrum is shifted into the red. The redshift of a distant star or an entire galaxy is greater the further away the object is. Since different distance determinations can now be used for many galaxies (supernovae type 1a or Cepheids), the respective redshift can be ascribed to a certain distance. The conversion factor is saved as Hubble constant designated.

swell
Wikipedia
"Physics" by Karl Kolde
"Powers of Ten"(German book title:" Ten High ") by: Philip and Phylis Morrison and the studio of Charles and Ray Eames
"The construction of the universe" by: Peter von der Osten-Sacken
"The Milky Way" by: Nigel Henbest and Heather Couper