How are micelles formed

Micelle, one above a characteristic concentration, the critical micelle concentration cM., aggregate formed in water from surfactant molecules (surfactants, biosurfactants). The number of surfactant molecules per M. is called Aggregation number. In the case of ionic surfactants, it is around 102, with non-ionic up to 103. The hydrophobic molecular parts of the surfactant form the micellar core, the hydrophilic head groups the hydrated outer boundary layer (Fig. A). In the case of ionic surfactants, this is an electrical double layer of surfactant ions and counter ions (star layer). With increasing concentration, the initially more or less spherical M. change over rod-shaped or cylindrical M. into lamellar (crystalline liquid) phases.

As inverse M. or reverse M. is the term used in non-polar solvents, e.g. B. hydrocarbons, occurring M. with reverse orientation (Fig. B). Inverse M. are thermodynamically stable and allow, among other things, performing enzyme-catalyzed reactions in organic solvents. By varying the solvent, for. B. the substrate specificity of enzymes can be changed. Inverse M. are increasingly used in biotechnology. 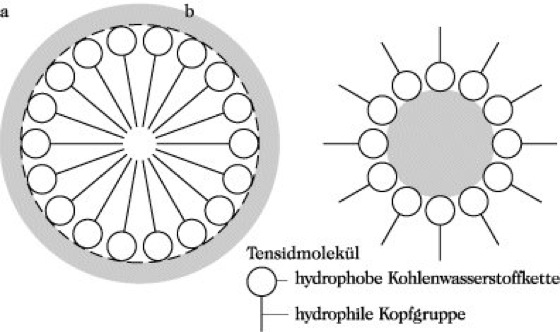