Can a tangent line intersect

A tangent is a straight line that touches a curve at a certain point and has the same slope as the curve.

The word tangent comes from the Latin (tangere) and means something like "to touch".

The question of the slope of a function at one point was a central question that ultimately led to the development of analysis. 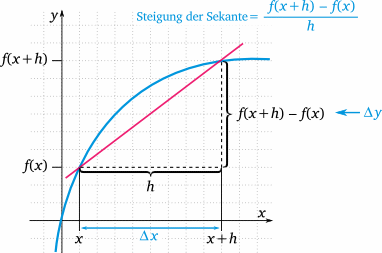 The tangent can also be derived geometrically. You start with one secant on, i.e. with a straight line that intersects the curve not in one but in two points. The secant (red) in our example intersects the curve (blue) at the points x and x + h. The slope of the secant can be determined from the two points of intersection with the curve. The resulting term is the difference quotient:

Slope of the secant =

The two points are separated from each other on the x-axis by the length h. By letting h become smaller and smaller, the secant also strives ever further in the direction of the tangent. This is expressed by the differential quotient: 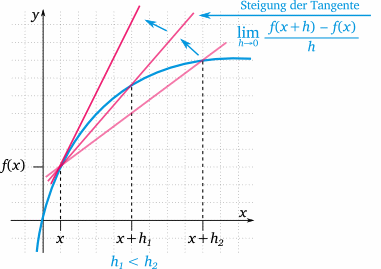 The figure on the right illustrates this behavior again. The secant initially cuts the function at the points x and x + h2. Since the limit value h can become smaller and smaller, the secant approaches the tangent more and more. Eventually h becomes infinitely small. When this happens, the straight line only intersects the curve at a single point. The secant thus became the tangent.

Note:
The slope of the tangent of the function f (x) at the point x is

There are two different methods of setting up the tangent equation. The first method is computationally the simpler, but requires learning an equation by heart. The second method is more complex in terms of computation, but can be derived more easily (for example in an exam). However, both methods require that you take the first derivative.

The equation of the tangent t (x) at point a is:

By simply inserting the values ​​in the equation and multiplying them out, the tangent equation was set up immediately and with little computational effort.

Method # 2: Straight through a point of known slope

First we need to take the first derivative:

In order to set up the equation of a degree, we still need a point through which the straight line runs. Since the tangent touches the function at a point, the tangent and function have this point in common. So now we have to put 5 in the output function:

With this we have enough information to set up a tangent equation: mt = 100 and P (5; 196). A straight line satisfies the equation y = m · x + b. Substituting in the values ​​we have, we can calculate the y-intercept b:

The tangent equation of the function f (x) at the point x = 5 is thus:

Tangent equation as a Taylor series

To the main article Taylor series

Pocket calculators with a built-in CAS sometimes have no special function for calculating the tangent equation, but they often have a function for Taylor series.

The first derivative gives the slope of the function as the ratio of the height to the width of a corresponding one Incline Tricks. Often, however, you need the gradient in degrees. To convert the slope of the first derivative into degrees, we need the inverse tangent function, written as tan-1 (x) or atan (x). The slope in degrees of a function at the point x is therefore: