Are there any abortion survivors?

[Shut down] [To press] Abortion survivor 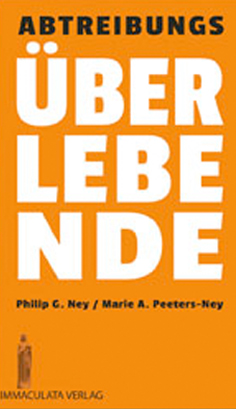 The trauma of those who survived natural disasters, wars, or genocide are now widely recognized. If this does not happen, the survivors feel their suffering even worse. But if you no longer recognize yourself as a victim, then your situation is hopeless.
The position of sexually abused children whose perpetrators are protected is very similar to that of abortion survivors, except that the suffering of the latter is practically unknown today. In this way, the crime committed against you is trivialized, its fearfulness is denied and reduced to everyday normality. Evil becomes banal.
In her excellent book Abortion Survivors, Dr. Philip Ney and Dr. Marie Peeters-Ney have their say. In their research, they investigate what goes on in children who grow up in a family in which one or more abortions have occurred. Your book unites, as the editor rightly says in his foreword, "serious science and deeply felt humanity".
Philip Ney was one of the first to discover the PASS syndrome (“Post-Abortion Survivor Syndrome”), list its symptoms and develop therapeutic approaches.
Abortion survivors are often people who exhibit the following symptoms: they feel worthless, cannot trust others, have fear of attachment, are cynical, immature, and easily become addicted. The surviving children often notice the fact that siblings have been aborted intuitively - they suspect that someone is missing.
They cannot trust their parents because they could have killed them too. Above them, consciously or unconsciously, hovers the sword of Damocles of "desirability". Hence their cynicism in response, for so-called parental love was really murderous. Hence their irrepressible desire for recognition and further desirability, the addiction to be “politically correct” so as not to endanger their fragile status of desirability.
And finally the spiritual consequence: the distrust of God, which is all the more tragic because only He can give them the consciousness of unconditional love and an absolute will, despite parental failure. Isn't it understandable? They are afraid to bond and take responsibility because who can they count on if their own parents could have killed them? Such a reality is unbearable, and addiction is programmed as a way out - of whatever kind - in many cases.
The "survivor syndrome" has long been known, but was only diagnosed in abortion survivors through Ney's pioneering work. As the Ney couple point out, there are many (ten or eleven) forms of abortion survivors. Sometimes the twin or another sibling will have an abortion, or consideration will be given to whether or not to have an unborn child. Some children only live because their mothers found out about their pregnancy too late.
The desired children of in-vitro fertilization, in turn, owe their lives to the fact that they were healthier than their siblings. In countries where abortion is widespread, the proportion of those traumatized is very high. In China, with its one-child policy, 85% of under-35s are believed to be such survivors. But even in North America, the number is an estimated 70%.
A society made up of the majority of traumatized people must be dysfunctional. Given the high proportion of abortion survivors, it is astonishing that the social fabric is still held together. But the doctor couple Ney do point out that human ecologies cannot be abused indefinitely either.
The social structure collapses at some point if the path of conversion is not taken in good time, and that means in this context first of all: If the unfortunate talk of "desired children" is not put to an end and instead the dignity of every life is decisive again is, so the truth that every child is a desired child.
"The truth has never been popular," said the Neys. But the truth always comes out. Abortion survivors are a visible sign of how we are really doing.