Was the Spyro remaster worth picking up

Crash Bandicoot 4 in the test: jumping revival of the Playstation original

Who would have thought that a cheeky and slightly stupid bag badger would one day help star developer studio Naughty Dog to make a big breakthrough? At the start of the series in 1996, "Crash Bandicoot" was still the mascot for the Sony PlayStation brand. Today Naughty Dog prefers to take care of “The Last of Us” or “Uncharted”, while Toys For Bob (“Skylanders”) tries to implement the fourth part “Crash Bandicoot 4 - It's about Time”.

In contrast to the current trend, this is not a reboot, but a continuation of the game of skill and follows on from “Crash Bandicoot 3: Warped”.

In terms of play, you don't dare to experiment unnecessarily: “Crash Bandicoot 4” brings all the strengths and the few weaknesses of the early offshoots to 2020. 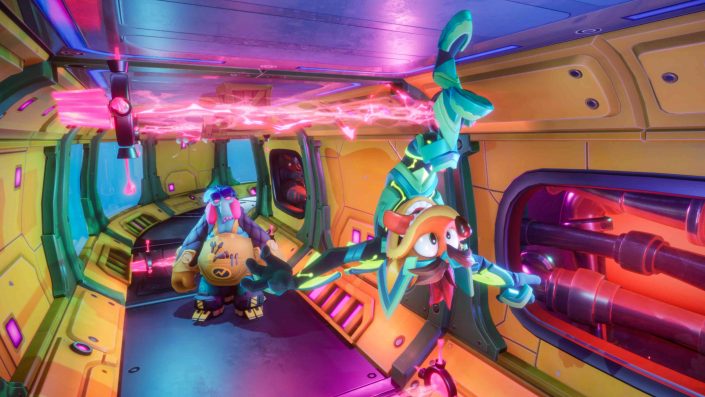 Of course, in the case of "Crash Bandicoot 4: It's about Time", you shouldn't expect a profound story or an emotional rollercoaster ride. Graphically and narrative, the game is very reminiscent of the Looney Tunes cartoons. Correspondingly simple, but humorous, the adventure is also presented in the cutscenes.

It was time for this sequel!

And so at the beginning you watch how the villains N. Tropy, Dr. Neo Cortex N, N. Gin, Uka-Uka and N. Brio manage to break out of their interstellar prison. Unfortunately, this damages the space-time continuum and opens up dimensional cracks everywhere. So that the entire universe does not fall into chaos, you have to close these portals and for this purpose you need the four quantum masks.

You start your game with Crash and his sister Coco. In each level you decide for yourself which of the characters you want to play with. In the further course you will unlock further characters from the "Crash Bandicoot" cycle and take over Dingodile, Tawna or Dr. Neo Cortex himself. 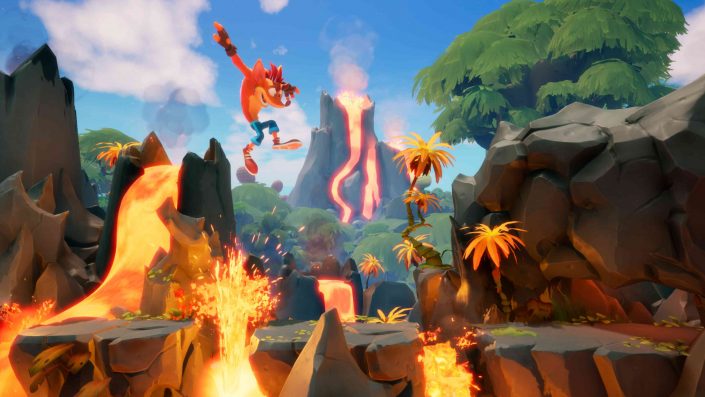 A journey through time and space

"Crash Bandicoot 4: It's about Time" stays true to the line and is a classic 2.5D game of skill for a large part of the playing time. Before you embark on your adventure, the game gives you a choice: modern and retro. On "Modern" it gives you fair checkpoints and, if you go on it too often in a row, even treats you to an Aku-Aku mask as protection. In addition, you have an infinite number of lives, even if "Crash Bandicoot" links certain successes to the number of restarts. “Retro”, on the other hand, combines game progress with a limited number of lives. If you don't have any more and go on it, you start all over again.

The great strength of the adventure, however, lies in its wealth of ideas and variety. Thanks to reversed sections in "N.Verted" mode, "Crash Bandicoot 4" has 100+ missions. None of the levels is like the other. The scenarios, characters and skills are constantly changing. “Crash Bandicoot 4” skilfully juggles the space and time travel setting and you can literally see in the game how much the developers enjoyed their creative freedom.

The dimension map serves as the HUB level on which you select the scenarios. By the way, our favorite was a New Orleans-style street festival, at which ghosts provided the necessary acoustics, while a huge parade was held in the background. But also the other levels, whether dystopian future or dinosaur time, convince with great attention to detail. Sometimes we caught ourselves pausing briefly and marveling at the surroundings, the lovingly designed figures or even the animations.

Just when Crash slides over ice or slime in his sneakers, it looks absolutely ridiculous. There are also smaller cameos such as "Spyro". The new, revised comic look suits the game perfectly and the many extremely lovable little things make "Crash Bandicoot 4" absolutely special. 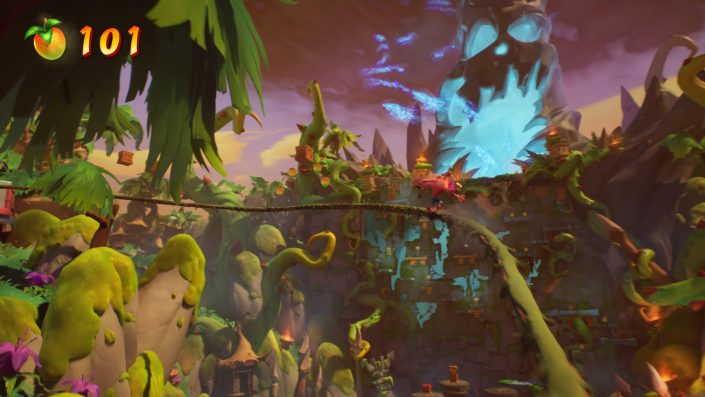 The variety already highlighted here is also reflected in the gameplay. Sure, "Crash Bandicoot 4" is a 2.5D game of skill in his favor. Nevertheless, it comes up with many tricks and tricks to ensure that there is no boredom. Wallruns, walljumps, short vehicle and slide sequences come together with the tried and tested hopping gameplay.

The four Quantum masks that you activate in the course of the game and use at marked positions are absolutely crucial. With Lani-Loli, for example, you activate the phase shift. As a result, blue shimmering objects appear or disappear again. With Kupuna-Wa, on the other hand, you slow down time so that you can, for example, jump over falling objects. With Ika Ika you reverse gravity. This causes all kinds of brain twists, because you suddenly run along the ceiling and can avoid obstacles. With Akona, on the other hand, you carry out an endless vortex attack and can fly over abysses far away.

Very important: You never access all four skills at the same time. Instead, the masks help you at specially designated points. This in turn brings structure to the various courses, but also keeps the controls comparatively simple. Often it is more the speed of the game and not the tasks themselves that are the hurdles here. 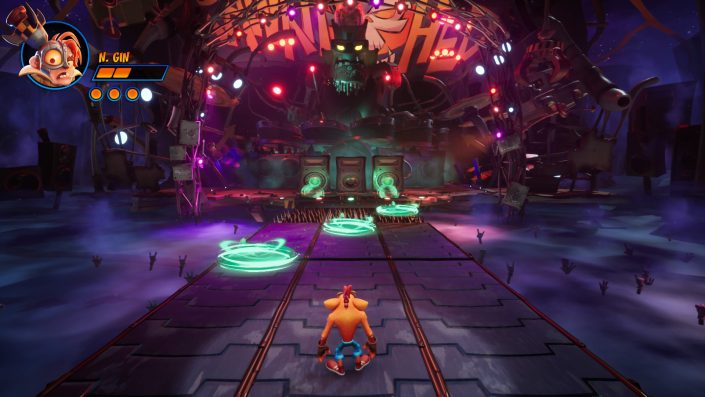 However, "Crash Bandicoot 4: It's about time" is not an easy game either. It very often requires a lot of perfection in the movements and often precise timing of the jumps. In the final boss fight, we bit into the virtual grass 60 times. In other missions, too, 30 to 40 restarts are not uncommon.

“Crash Bandicoot” sometimes requires a lot of precision and sometimes it only becomes clear when you take a second look where the right path is. The perspective often plays a trick on you. Thanks to the 2.5D level design, you can change your perspective in real time. This sometimes gets on your nerves when, for example, you jump sideways past a box in vertical side-scrolling gameplay.

The enemy types could hardly be meaner: Crash and his friends take on voracious moray eels, combat drones or even zombie pirates. Of course, they all have specific attack patterns that you have to learn and counter accordingly. However, this process takes time and accordingly you hardly succeed in the perfect run-through in hardly any level.

You finished the actual story after ten to twelve hours. But "Crash Bandicoot 4" is a game for perfectionists: There are tons of hidden objects in the levels. If you want to find them all, you have to return to the worlds and learn about and positions of the hidden objects. So if you want to activate all skins, you have to invest a lot of time and sweat to get through the levels quickly and without damage. Fortunately, there are no microtransactions!

“Crash Bandicoot 4” reminded us of the motocross game “Trials”. However, it has one major disadvantage: the loading times. If you want to restart a mission after unsuccessful attempts, it will take too long before you are back in the game. 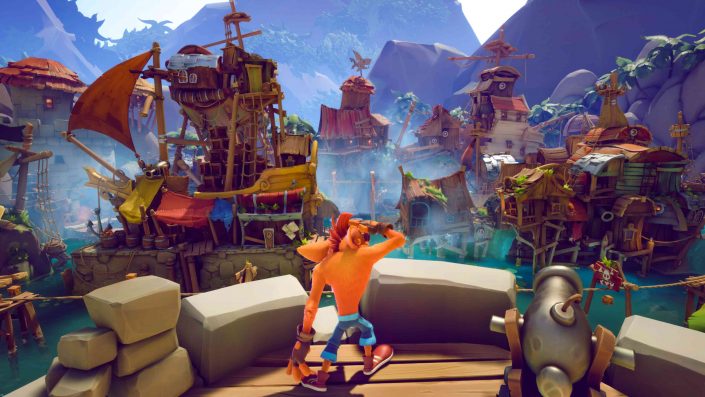 The strength lies in the single player

Don't worry, Toys For Bob didn't put Crash on a cumbersome versus mode or anything like that. Instead, the game has some nice hot seat variants. “Passing on” in particular convinced us very much in the test. If this mode is activated, you determine when the gamepad has to be passed on - after a checkpoint, screen death, or both.

In this way you experience the missions together with friends or family and can be happy about the successes, cheer or give tips. “Bandicoot fight”, on the other hand, describes races that you fight under time pressure and have to destroy boxes in the process. It's nice to take a break, but nothing more.