Why is helium not reactive

"Unsocial" element tricked: For the first time, researchers have created a stable chemical compound with the noble gas helium. Until now, this element was considered to be too inert and stable to react with other atoms. But under extremely high pressure, the chemists succeeded in producing a salt-like ionic crystal from sodium and helium. According to the researchers in the journal "Nature Chemistry", this connection is stable above 113 gigapascals of pressure.

Helium is the lightest of the noble gases - and one of the most "unsocial". Because in contrast to almost all other elements in the periodic table, helium does not voluntarily enter into a bond. Its two electrons completely fill the s orbital and make the atom “unwilling” to change this by bonding with other elements. Only under extreme conditions does helium form what is known as an Efimov trimer, a loose association of three atoms.

"In the last few decades, many scientists have tried to find stable helium compounds," explain Artem Oganov from the Moscow Institute of Physics and Technology and his colleagues. But so far it has not been possible to generate stable helium molecules with real covalent bonds.

But Oganov and his colleagues have now "tricked" helium. Their idea: Under extremely high pressure, the properties of the noble gas could change to such an extent that binding is possible. To test this, they first looked for potentially stable molecular structures of helium at different pressures with the help of an algorithm.

And indeed: "We have found a new compound: At pressures above 160 gigapascals, Na2He has a lower enthalpy than a mixture of elemental sodium and helium," report Oganov and his colleagues. This is a sign of a crystal structure that is stable under these conditions. At pressures that can be generated in the laboratory, sodium is the only element with which helium forms such a compound.

But can such a helium connection also be established in reality? To test this, the chemists subject a mixture of sodium and helium to extreme pressures in a diamond punch press. At pressures of more than 113 gigapascals, measurements using X-ray crystallography and Raman spectroscopy showed a change: the mixture of the two elements had become a crystalline compound. 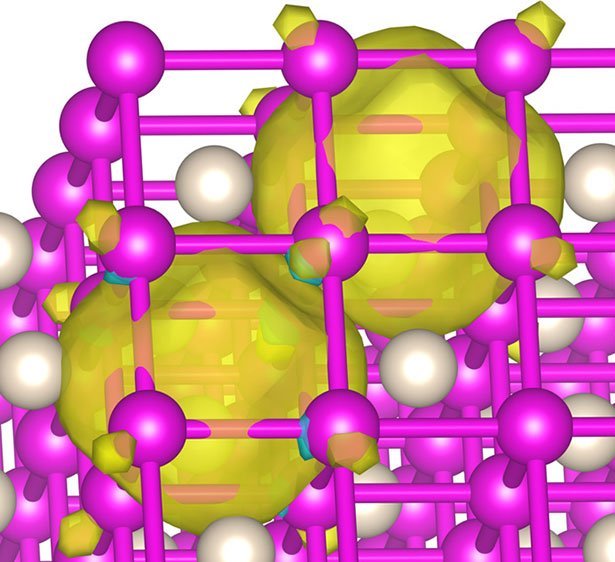 In each empty field of the lattice formed by sodium ions (pink) there is an eight-center bond (yellow) with the electron pair in Na2He. Helium atoms are shown as white spheres. © Ivan Popov / Utah State University

“The connection we discovered is quite unusual,” says Oganov. In its structure, Na2He resembles an ionic, salt-like crystal. In this, the helium atoms form a cubic lattice, similar to a 3D chessboard, in which every black field is occupied by helium. The empty fields in between are occupied by a pair of electrons surrounded by sodium ions.

Exotic but a real connection

“This makes this compound an electride, a crystal made of positively charged ion nuclei in which strongly localized valence electrons play the role of anions,” the researchers explain. Only the presence of helium leads to this localization of the electrons and turns the exotic crystal into a non-conductor.

Although Na2He is exotic, it is still a real compound of helium with another element that is stable at high pressure, as the scientists emphasize. The fact that there is such an “impossible” connection seemed so unbelievable even to the reviewers of the specialist journal that it took two years for the specialist article to pass the peer review and be published.

"Our study demonstrates that very bizarre phenomena and connections can arise under extreme conditions," says Oganov. With the help of their algorithm, he and his colleagues have even tracked down a second helium compound that is stable under high pressure. Na2HeO is similar in its crystal structure to Na2He, except that there is now an O in each of the fields with the electron pair2--Ion is sitting. The existence of Na2HeO has yet to be proven experimentally. (Nature Chemistry, 2017; doi: 10.1038 / nchem.2716)