What does crossing mean

A street crossing in Soltau, a town in Lower Saxony. There are traffic lights and separate paths for cyclists across the intersection. 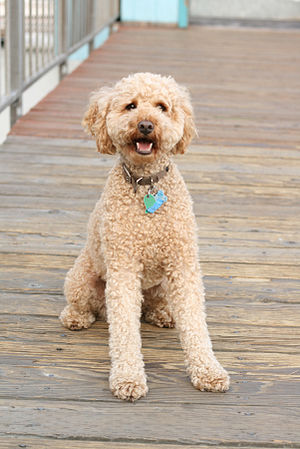 The Labradoodle (pronounced: Labraduudl) is a cross between the dog breeds Poodle and Labrador Retriver

An intersection in traffic means that two traffic routes cross each other. Most of the time you think of two streets that cross each other. For example, one street goes from north to south and the other street from east to west. The intersection is where they meet. In addition to road crossings, there is also, for example, the crossing of a street with a railway line.

Accidents at an intersection are more common than usual. There lanes run over other lanes: If you are not careful, you might drive your car against a car from a different direction. An intersection is also a place where cyclists or pedestrians have to cross a lane of cars if they want to continue.

That is why there are rules for crossings. Right of way is when someone is allowed to drive or walk from one direction rather than someone from another direction. The basic rule is: right before left. At intersections with a lot of traffic, traffic lights have been set up with light signals to show who is currently allowed to drive.

Some intersections are particularly large and confusing. Several highways meet there, or railway lines, or other routes such as a canal. Bridges or tunnels ensure that motorways, for example, remain “free of intersections”. The intersection of airways for airplanes is often referred to with the English expression intersection, i.e. inte-sssäcktschn.

The term crossbreeding is also used for a related topic, namely the reproduction of animals or plants. For example, humans can combine a new one from two different apple varieties. Or he deliberately leads a bull to a cow so that the calf will give a lot of milk afterwards.

There are also other search results for “Crossing” from Blind Cow and Ask Finn.