How to use an FM transmitter

FM transmitter: You have to pay attention to this during operation 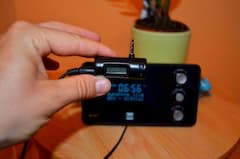 Despite the CE seal, many FM transmitters exceed the transmission power specified by the Federal Network Agency
Image: Michael Fuhr FM transmitters are inherently a very good invention: They make it possible, for example, to listen to music from a smartphone on a free FM frequency in the car or kitchen radio if there is no AUX connection or Bluetooth. Nevertheless, users have to be careful, because the line between legality and illegality is quickly crossed with the small devices.

Of course, it is not easy for the user to see whether he is still operating within the legally protected framework. A simple attempt would be to test the range with a conventional VHF radio. With the transmission power permitted by the network agency, the signal should only be audible on VHF in the close range of the transmitter, i.e. in a radius of around five meters with the permitted radiation power. But if it is enough for the entire apartment or even several streets away, you can assume that you are operating a pirate station without knowing it.

A quick test by teltarif.de with four VHF mini transmitters showed that the VHF signals were still audible up to 300 meters away on three of them. We were able to supply the entire residential area with a model that we had acquired from a large German electrical company. Only one of these small devices did the FM range actually end in the same room.

Here you are violating several regulations: In addition to operating a device with unauthorized radiation output, the distribution of music via radio is also a violation of copyright law.

However, teltarif.de does not have any information on whether the Federal Network Agency has already taken active action against the operators of such broadcasters. So far, this has only been the case if the user disrupted an official radio frequency of a radio program by operating the mini-transmitter. For example, by operating the transmitter directly on this or a neighboring frequency.

In any case, users should look out for a free frequency on an FM radio beforehand. This is often not easy with today's heavy FM band occupancy. Safety distances to local transmitter frequencies of at least 0.3 MHz are no longer to be observed, as the band is completely overcrowded. Especially in the car you should only use FM transmitters that always automatically look for free frequencies. Continuous operation of the FM transmitter with an empty carrier is not permitted. After operation, the customer should therefore always completely disconnect the small transmitter from the network.

The Federal Network Agency recommends that when purchasing devices, make sure that they are CE-marked. However, tests have already shown that many of these devices also work with excessively high radiation outputs ex works. Our four test models also all bear the CE seal.

Manipulation of the mini transmitter is not allowed

It goes without saying that any manipulation of the FM transmitter to increase the range is not permitted. For example, anyone who unscrews the device, connects a metal wire to the transmitting antenna and directs it to the outside is liable to prosecution.

Since there is currently no list of which devices actually comply with the requirements of the Federal Network Agency, customers are left out in the rain. From a purely legal point of view, many make themselves liable to prosecution, because the possession of VHF transmitters with unauthorized high transmission power is permitted in Germany, but their operation is not.

We have presented the latest car adapters and black boxes for DAB + reception in a series of pictures.