What kind of element is chrome 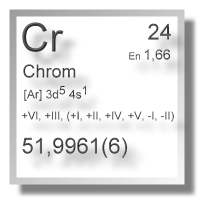 Chromium - the 'colored' among the chemical elements because of its colorful compounds - is a silvery white, in pure form tough, flexible, malleable, crystallizing in a body-centered cubic lattice, with the chemical symbol Cr and the atomic number 24.

Chromium is one of the few metals that can passivate: Metallic chromium reacts spontaneously with the oxygen in the air and forms a very thin oxide layer that protects the metal from further corrosion. This surface is hard, non-reactive and - as known from chrome - can be polished to a high gloss. This makes chromium ideal for electroplating other metals to protect them from oxidation, and because of its hardness, it is used for hardening and chrome plating the surface of many objects - such as furniture. B. Metal Tools - used.

The Cr atom - and thus the chemical element chromium - is clearly defined by the 24 positively charged protons in the atomic nucleus. The same number of electrons ensures the electrical balance in the uncharged chromium atom.

The nuclear building blocks of the neutrons ensure that there are differences between the atomic nuclei. These types of atoms are under the term Chromium isotopes or chromium nuclides (isotope data: see there).

The earthly chromium deposits consist of an isotope mixture; the relative atomic mass is therefore given as 51.9961 u.

The following table lists the binding energies or the ionization energies IE, i.e. the required energy in electron volts (eV) to separate a specific electron from a chromium atom.

The following table lists the electron binding energies of the individual chromium electrons in the respective orbitals. The values ​​are given in electron volts (eV).

The following figure shows an emission spectrum of chromium with the characteristic spectral lines in the visible wavelength range between 400 and 700 nm:

Chromium is a member of Group 6 of the transition metals. Metallic chromium Cr (0) has the irregular electron configuration [Ar] 3d due to the lower energy of the high-spin configuration5 4s1 - instead of 3d4 4s2. It thus has six valence electrons that actually form bonds in a wide range of oxidation states; the states +3 and +6 occur most frequently in chromium compounds. Chromium charges of +1, +4 and +5 are rare and rarely encountered.

The chromium cation with the positive charge 3 (Cr3+) is the most stable ionic state of chromium.

Material and physical properties of chromium

The following overview lists some physical data and material properties of the pure chromium metal.

Chromium ranks 13th among the abundance of chemical elements in the earth's crust with an average concentration of 102 ppm. Chromium compounds are formed in the environment through the erosion of rocks containing chromium and can be redistributed through volcanic eruptions. Typical background concentrations of chromium in environmental media are: atmosphere <10 ng m-3 ; Soil <500 mg kg-1; Vegetation <0.5 mg kg-1; Fresh water <10 μg L.-1 ; Sea water <3 μg L.-1; Sediments <80 mg kg-1.