Who was Phil Hartman 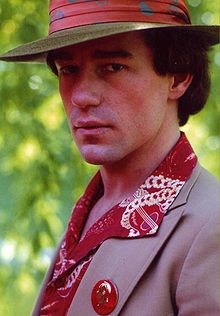 Phil Hartman as Chick Hazard in "More Smoke About Nothing", 1980[1]

He joined in 1986 Saturday Night Live on and was a member of that show for eight seasons. Hartman was known for his parodies of famous people like Ronald Reagan, Charlton Heston, Frank Sinatra, Telly Savalas, Ed McMahon, Michael Caine, Jack Nicholson, Barbara Bush, Burt Reynolds, Phil Donahue and former US President Bill Clinton. He also embodied this in various skits on the Late Night ShowThe Tonight Show with Jay Leno. His other SNL characters were Frankenstein and the Unfrozen Cave Man Lawyer. He also played "Bill McNeil" in the sitcom "Newsradio".

From 1991 to 1998 Hartman was one of the speakers for the Simpsons, he lent his voice to the lawyer Lionel Hutz and the B-movie actor Troy McClure. Since Hartmann's death, the figure of Troy McClure is no longer a spoken character. In the series Futurama he was supposed to speak Zapp Brannigan, this part was taken over by Billy West.[2]

On May 28, 1998, he was murdered in his sleep by his third wife, Brynn, who subsequently killed herself. The reason is unknown. Hartman had two children with his wife, Sean Edward Hartman (born 1989) and Birgen Hartman (born 1992). After the death of their parents, the children grew up with their mother's sister and her husband. Hartman's last film, Small soldiers, was dedicated in his honor. The music group S.O.D. released on their 1999 album Bigger than the devil the song Ballad of Phil H. in memory of Phil Hartman.