What is a TuneCore for movies

In times of affordable home studios and digital music formats, the functions of classic record companies and labels are gradually becoming obsolete. The self-distribution of individual tracks or complete albums often fails due to the lack of reach of the band's website. However, there are already alternative sales structures that help musicians to get their own material professionally and widely distributed among the people. The new tunecore launched in Germany is a more than interesting service platform that we have taken a closer look at for you. 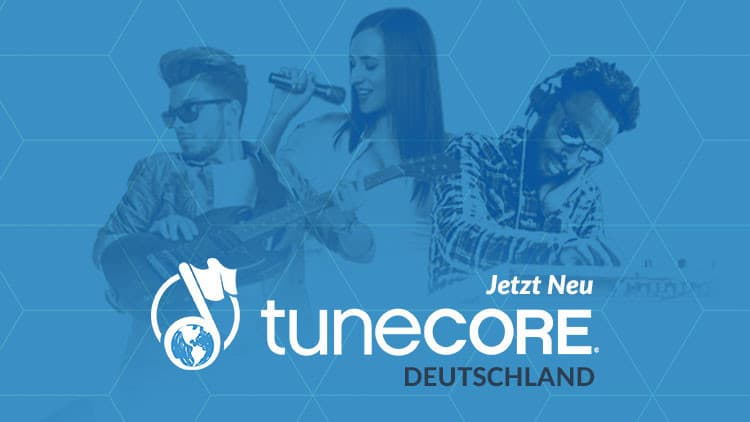 Tunecore takes over the tasks of (digital) distribution of your music for you. It stores individual tracks (singles) as well as complete albums on your behalf on the well-known Internet platforms such as iTunes, Spotify, Shazam, Juke, Amazon Music, Google Play, eMusic, Simfy and a few others.

The availability of your music on these platforms is essential if you want to reach the broad mass of music consumers.

The website of the provider Tunecore is only used to manage your publications. It does not act as a shop itself. An extensive range of other services (royalties, YouTube, song analysis) should make it easier for you to make money with music. Thus, the provider covers a wide range of earning opportunities with digital publications.

As with any platform, you first have to register with Tunecore. This can be done easily using the registration form or, even easier, via your Facebook account. Mind you: the registration itself is free of charge.

Once you have registered, you will find yourself in the so-called backend. So the area in which your music can be managed. This is the place to upload singles and albums, as well as view sales and revenue reports. You can also transfer the income you have made here from the local account to your PayPal account.

The backend is nicely designed, logically structured and accordingly self-explanatory. If you still have questions or don't understand something, there is an extensive help area.

In order to create an album or a single, you have to enter some data such as the title, as well as a maximum of two genres and the desired release date. In the next step, you can upload your cover artwork or have one generated automatically from Tunecore's templates.

Then you select the shops and platforms where your work should be represented at all. Last but not least, the individual tracks are uploaded in 16-bit / 44.1 kHz stereo wav format.

As a musician, you are initially puzzled by the choice of genres. For example, only the dance and electronic directions are available for electronic music. Other, multi-layered styles such as jazz and heavy metal do not contain any further subdivisions. Punk or hardcore doesn't exist at all.

Since most stores and streaming platforms have sub-genres, a fine categorization would be desirable here. Ultimately, however, you can only choose from those genres that are represented in all stores. Perhaps a sensible alternative would be to determine the categorization for each store individually. But who has that much time?

A total of 35 shops and streaming services are currently available at Tunecore. There is detailed information about each provider: For example, whether downloads and / or streams are offered, in which countries the service is available and what lead time you have to expect before your release is available there.

When selecting the shops, you can specify whether the music should be distributed worldwide, only in certain countries or whether countries should be excluded. A shop for physical sound carriers is also available with Amazon On Demand. These are always made when a sound carrier is ordered from Amazon.

Another service from Tunecore is to take care of your royalties. In other words, the fees that radio stations or streaming services pay to collecting societies like GEMA for playing your music, for example.

In addition, Tunecore can try to fit pieces of music into films, commercials or video games for you. This service costs you a one-time fee of 69.90 euros as well as 10% of the royalties distributed in this area.

A useful feature is hidden behind this long name. For a one-time fee of 9 euros, the provider takes care of the monetization of your music that was used in YouTube videos.

The highlight: Not only your own videos are billed directly to YouTube. This also includes videos from other YouTubers that are stored with your titles. After all, 80% of the income generated in this way ends up directly with you.

Tunecore works together with the instant mastering service LANDR. With this you can have your music professionally mastered online (even without going through the provider). But of course you also have advantages here if this is done via the platform: The costs for a complete album mastering for Tunecore users via LANDR are only 9.99 euros.

Even if instant mastering is a controversial issue, there is little you can do wrong at this price.

In cooperation with the market researchers SoundOut, who specialize in music, the provider offers so-called fan reviews. Here music listeners rate your tracks and help to find out, for example, which song on the album could become the first / next single or which weaknesses need to be improved.

Various elements such as the vocals, the instrumentation, the production and the track are evaluated as such. In the rather detailed reviews, emotional aspects are also dealt with.

Is it worth joining Tunecore?

It is important to carefully weigh costs and benefits. The fees of 29.99 euros per album (49.99 euros in the following year) and 9.99 euros per single are relatively moderate. Especially considering that in the end you own 100% of the sales proceeds.

Of course, you have to consider that the fees arise again and again every year - even if your penultimate album may not sell at all. Given the rather short half-life that music now has, the question arises whether the service beyond the first year is worthwhile.

The good news: You can of course cancel this too. Nevertheless, as a band or musician, you want to be able to make your back catalog available to your audience. In the worst case, this can turn into negative business for you - albeit one that is manageable.

All in all, Tunecore offers musicians an attractive offer to digitally sell pieces of music independently of a record company. The navigation of the service is pleasantly intuitive and leaves no questions unanswered.

The number of shops and streaming services is impressive, but still in need of improvement in some areas. For most musicians the big ones are enough - stores that are relevant for DJs such as Beatport, DJtunes or Juno are unfortunately not yet represented. This means that Tunecore is not (yet) a fully developed tool for producers of pure club music. Anyone who moves on other musical paths, however, will find a really versatile service in Tunecore to bring music "to the man" in a targeted manner.

The music publisher's option is a good thing for those who want to get additional royalties from broadcasts or live performances. Likewise the YouTube Sound Recording Revenue Service. Functions such as instant mastering or fan reviews are an interesting bonus that probably does not appeal to every artist to the same extent, but is still "nice to have".

The pricing is fair, so that Tunecore pays for itself quickly with current releases. For older releases that are no longer popular and are no longer regularly purchased, the annual fee should be reconsidered. Even if you have a massive back catalog from which only few sales can be generated, you should stretch your feelers for a different price model.