Windows Phone has a future

Nothing new at MWC: does Windows 10 Mobile have a future? 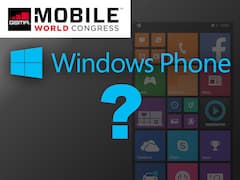 Unclear future for Windows Phone
Logos: Microsoft / MWC, graphic / screenshot: teltarif.de Microsoft presented a new 2in1 device with the Porsche Design Book One at the Mobile World Congress (MWC) in Barcelona, ​​but it missed news from the smartphone sector. There were not even hints about the Surface Phone, which has been haunted the rumor mill for some time. So was that it for Windows Phone or Windows 10 Mobile?

The market shares for smartphones with the Microsoft operating system were recently on the decline. As successful as Windows 10 may be on the desktop, it has not caught on on the phone. However, Microsoft has recently not even brought any new smartphones onto the market, but only sold the remaining stocks of devices that have already been produced.

The idea of ​​largely only taking care of the software, but leaving the development and production of smartphones to other manufacturers, does not work. On the one hand, there are only a few Windows Phones left apart from the previous Lumia range from Microsoft, and on the other hand, the Lumias originally launched by Nokia had always dominated the market.

New Alcatel smartphone is not new

Unclear future for Windows Phone
Logos: Microsoft / MWC, graphic / screenshot: teltarif.de Now Alcatel has presented a "new Windows Phone" for the European market at the trade fair in Barcelona. In fact, the Idol 4 Pro is only the Idol 4S, which has been available on the American market since last year. It is therefore all the more incomprehensible that TCL, as a manufacturer, is taking its time with the market launch in our part of the world until June.

In November Microsoft had announced the presentation of an "ultimate mobile device". There was already talk of "great new smartphones" in September. The Mobile World Congress would have been the right stage to at least give an outlook on where the journey with the smartphone sector is going - even if it might be too early for specific device announcements.

At the moment, Microsoft is giving the impression that it has lost interest in Windows Phone. That, in turn, shouldn't necessarily encourage developers to develop apps for the ecosystem. Where there are no devices, there are no buyers. The market shares will probably continue to move in the direction of the regions of Blackberry 10, which is approaching zero.

At MWC, we had the opportunity to subject the Alcatel Idol 4 Pro to a hands-on test, which you will find in a separate report.