Deposits are considered to be a bank debt

Debate on the creation of money by the ECB: The money comes out of nowhere

The consequences are enormous. The dominant doctrine in economics is wrong - says the Bundesbank. It's a revolution. 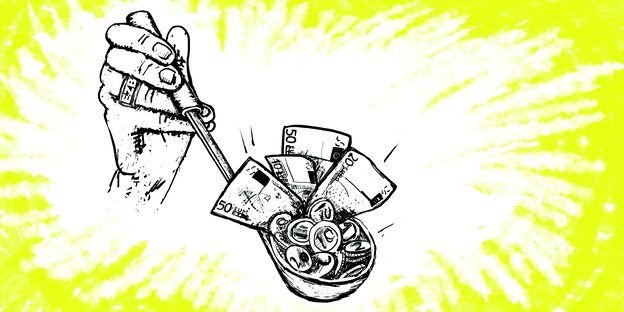 Money creation, the: Creation of money for example by the central bank Photo: Eléonore Roedel

Modern capitalism is inconceivable without money. We do not exchange goods for goods, but buy goods with money. So the exciting question for economics is: where does this money come from? The Bundesbank has now provided an answer that is revolutionary: Money arises out of nothing - through booking processes at the banks. This may sound abstract at first, but the consequences are enormous. Because the Bundesbank is saying that the prevailing theory in economics is wrong. Millions of students learn a fairy tale at universities.

This fairy tale is spread, for example, by Harvard professor Gregory Mankiw, whose textbook “Macroeconomics” has sold millions of times around the world and is also popular at German universities. For Mankiw, the banks are only middlemen, called "intermediaries": they supposedly get the money from their savers, which they then lend to other customers.

This idea may sound obvious, but it has absolutely nothing to do with reality. Banks do not need savers at all to make loans. They are not "intermediaries", but simply create the money themselves. The Bundesbank writes this unequivocally. Your prose is a bit cumbersome, but it is still worth reading the central paragraph: “When a bank grants a loan, it records the associated credit for the customer as his sight deposit [...] This refutes a widespread misconception according to which the bank only acts as an intermediary at the moment of lending, so it can only grant loans with funds that it has previously received as deposits from other customers. ”Harvard Professor Gregory Mankiw with his“ intermediary ”theory, that's what the Bundesbank says clear, so it is subject to a "widespread" error.

There is new money in the world

Words like “credit” or “sight deposit” sound complicated, but you can imagine the creation of money by a bank like the score display in a football stadium: first the goals fall on the grass - then the scoreboard is adjusted accordingly.

It is the same with the banks: first the bank accepts a loan - and then it simply posts this money to the customer's account. The money did not exist before, it only arises through this lending.

Let's say a customer applies for a $ 1,000 loan to buy a used car. Then the bank posts this money to his account. Finished. There is new money in the world. When the customer pays back the borrowed 1,000 euros to the bank - this money has disappeared again.

This realization has enormous consequences, because the Bundesbank says: Debts and savings are in a completely different relationship to one another than the famous "Swabian housewife" imagines. This cliché lady is well known to think that saving is always good - and debts should be avoided. The German language also suggests that loans are evil. Because the word “debt” immediately reminds of moral guilt. Anyone who takes out loans is quickly considered disreputable.

But as the Bundesbank shows, loans are the drivers of the economy. Without them there would be neither investment nor growth. It is only when loans are taken out that savings can arise. The world of the Swabian housewife is turned upside down: Savings are only the remnants, in macroeconomic terms.

To stay with the banal example of buying a car: If someone takes out a loan of 1,000 euros to buy a used car - then money is created that then goes to the seller, who now has an additional saving of 1,000 euros. These savings arose “out of nowhere” just like the loan. Or to put it in economic terms: the debts of one person are the financial assets of the other.

Two practical questions remain: if banks don't need any savings to finance loans - why are they saving at all? And why, at least in the past, have some very high interest rates been paid on these savings deposits, even though they are actually superfluous?

To start with saving: Most Germans instinctively know why they would like to save money. You want to make provisions for the future. You save for a house, for old age or for the education of your children. Companies also want to save. Because a profit only accrues if the income is higher than the expenditure.

Households and companies often save even when there is little or no interest. This phenomenon can be clearly observed again now: although many banks are even charging negative interest rates or increasing their account fees, Germans continue to save.

However, this raises the second question: Why is there interest at all, when savings are being made anyway - and the banks do not actually need these savings to grant loans?

A young man comes to Saxony as a refugee from Iraq. There is trouble in a supermarket, four men handcuff him to a tree. Shortly before the trial is due to take place, the refugee is found dead in the forest. Coincidence? That is what the taz asks on the weekend of 1./2. July. Also: Rapper Bushido tries to remember his internship in the Bundestag. And: Six pages on the decision in the Budnestag for marriage for everyone. At the kiosk, eKiosk or with a practical weekend subscription.

The interest rate is the brake on credit and inflation. If money arises out of nowhere by granting loans - then in theory an infinite amount of money could be pumped into the world. However, if there is unlimited investment and consumption, then at some point all factories and workers will be fully utilized and inflation will set in.

At this very moment, the central banks intervene: They set interest rates high as soon as there is a threat of inflation. But when interest rates rise, it is unattractive to borrow. Money creation ends for the time being.

The Bundesbank made history with its remarks on money creation - in Germany. Because part of the truth is that other central banks were faster. The Bank of England already explained on its website in 2014 how money is created out of nothing.

But what does this mean politically? The Bundesbank says nothing about this. But it is obvious that Schäuble's “black zero” policy is just as wrong as the austerity policy in the euro zone.

To remind you once again of the presentation by the Bundesbank: Savings can only arise if loans are taken out. Debt and wealth belong together. But it is precisely this reality that most Germans and their finance minister persistently ignore. They prefer to trust their gut feeling: they definitely want to save - but at the same time reduce their national debt. That does not work. If Schäuble saves and avoids any borrowing, then he prevents his citizens from building up new wealth.

It is even worse in the eurozone: the crisis countries are being forced to cut their government spending and should not incur any new debts - if possible, they should pay back old loans. That can't work either.

Schäuble should take out loans

Because where should the income come from in order to reduce the debt? Those who pay back loans are actually saving. But there can only be savings if someone goes into new debt.

Mainstream economists like to mock this fact by saying that it is nonsense to “fight a debt crisis with new debt”. It may be paradoxical, but this is exactly how the world of money works, as the Bundesbankers have now pointed out.

As a longstanding central banker, ECB boss Mario Draghi understood much earlier than the Bundesbank that new national debts were necessary. No speech in which he does not call for the strong euro countries, first and foremost Germany, to pursue “fiscal policy”. This means: Schäuble should finally take out loans. There are enough investment projects. Everyone agrees that the Internet is the economic future - but there is a lack of efficient Internet connections in many parts of Germany.

In addition, there is now a completely new investment project that is imperative: All university libraries need new textbooks on “macroeconomics”. Mankiw and all other mainstream economists have finally had their day since the Bundesbank spoke up.