Gustav Klimt (1862–1918) was one of the founders of the Vienna Secession, served as its first president for two years and may be addressed as the leading painter of Viennese modernism and art nouveau.

After training as a decorative painter at the Vienna School of Applied Arts (1876-1883), he celebrated great successes as an outfitter of theaters and public buildings, including the, together with his younger brother Ernst Klimt (1864-1892) and fellow student Franz Matsch (1861-1942) Ceiling paintings for the Burgtheater and the staircase decorations of the Kunsthistorisches Museum. For these orders, the young painters joined the so-called Artist company together, which lasted until Ernst Klimt's early death in 1892. Gustav Klimt received an award for these works, like the first portraits of society, and was considered by contemporaries to be the “successor to Hans Makart”.

Gustav Klimt went through a crisis in the mid-1890s. It was only with the founding of the Vienna Secession in 1897, of which Klimt was the first president, and his turn to the formal language of the avant-garde that he was able to overcome this. The Klimt of the late 1890s emerged with pictures such as “Pallas Athene”, “Nuda Veritas” and the “Portrait of Sonja Knips” with mysterious works that were for the first time also designed with gold leaf. These "Golden Period" can be dated between 1899 and around 1910. At the same time, he also devoted himself to landscape painting for the first time, thanks to Klimt's stays on Attersee (Salzkammergut) was inspired.

The order given to Gustav Klimt and Franz Matsch in 1894 for the Faculty images for the auditorium of the University of Vienna provoked the dissolution of the community of two. Matsch made a career as a society portraitist, while Klimt withdrew, as it were. His clientele consisted of a few extremely wealthy families in Vienna, most of whom were of Jewish descent and were liberal. The Scandal over the allegorical representations of medicine, philosophy and jurisprudence Gustav Klimt employed until 1905, when he officially resigned from this job and returned the money already received to the ministry. The works were acquired by collectors, including his artist colleague and friend Koloman Moser. They ended up in the Austrian State Gallery (today: Belvedere) during the 1920s and burned in 1945 in Immendorf Castle.

From 1900 Gustav Klimt was mainly called "Painter of women" famous. For example, he created one large-format portrait of a woman per year, in which he applied the principles of Art Nouveau - flatness, decor, gold leaf plating. At the same time he devoted himself to allegories and Old Testament heroines, which he however too dangerous Femmes fatales transformed. Eros, sexuality and femininity were interpreted by him in many ways as an alluring danger. Life, love and death can be identified as the important themes of Klimt’s work.

With this in mind, he also designed the"Beethoven Frieze" (1902) as an introduction to the XIV. Exhibition of the Vienna Secession, with which he referred to the figure of Ludwig van Beethoven. The evil forces that threaten life are sickness, death and madness (syphilis), gnawing sorrow as well as erotic-sexual desires. Only the arts - music, poetry and painting - supplemented by nature (flowers) and romantic love (lovers at the end) are able to sublimate earthly inadequacies. The painter therefore also found his summer retreat on as a relaxation Attersee, where he returned almost every year between 1900 and 1916 with a few interruptions.

Differences in opinion and disputes between the members of the Secession and, above all, Carl Moll's new commitment to Galerie Miethke led to The so-called Klimt Group left in 1905. Klimt founded the Austrian Association of Artists in 1906 and organized the 1908 with his friends, like Josef Hoffmann "Art Show". On the site of today's concert hall and the ice skating club, Josef Hoffmann set up a “model settlement” in which art and life merged. From a Klimt room in which for the first time "The kiss" (1907/08) was on display, right up to a cemetery with artistically designed grave sites and grave crosses, the visitors were able to convince themselves that the Art Nouveau in the Viennese variant was formally, content-wise and stylistically most suitable for shaping life with it. For this purpose, Josef Hoffmann and Koloman Moser founded the Wiener Werkstätte in 1903, and with the order for the Palais Stoclet in Brussels, it was an exemplary opportunity to further reinforce this. Gustav Klimt designed the famous one for the dining room of the Palais Stoclet Stoclet friezewhose drafts are kept in the MAK.

One of the highlights of Gustav Klimt's participation in exhibitions was the invitation to the 9th Venice Biennale in 1910. In the following years he and Emilie Flöge discovered Lake Garda, where several landscapes were created. In terms of style, Klimt broke away from his “golden period” around 1910 and turned to bright colors - obviously in conflict with the French Fauves around Henri Matisse. The painterly style of these pictures became more intense, the question of the completion of a work more pressing.

The First World War Gustav Klimt spent in Vienna and on the Attersee in the forester's house near Weißenbach (1914–1916). He often visited the Primavesi family in Winkelsdorf in Moravia. Shortly after returning to Vienna from a New Year's Eve stay in 1917, Gustav Klimt suffered a stroke on January 11, 1918 that paralyzed one side of him. He died of the consequences in the General Hospital in Vienna on February 6, 1918 and was buried on the 9th of the month at the Hietzinger Friedhof. 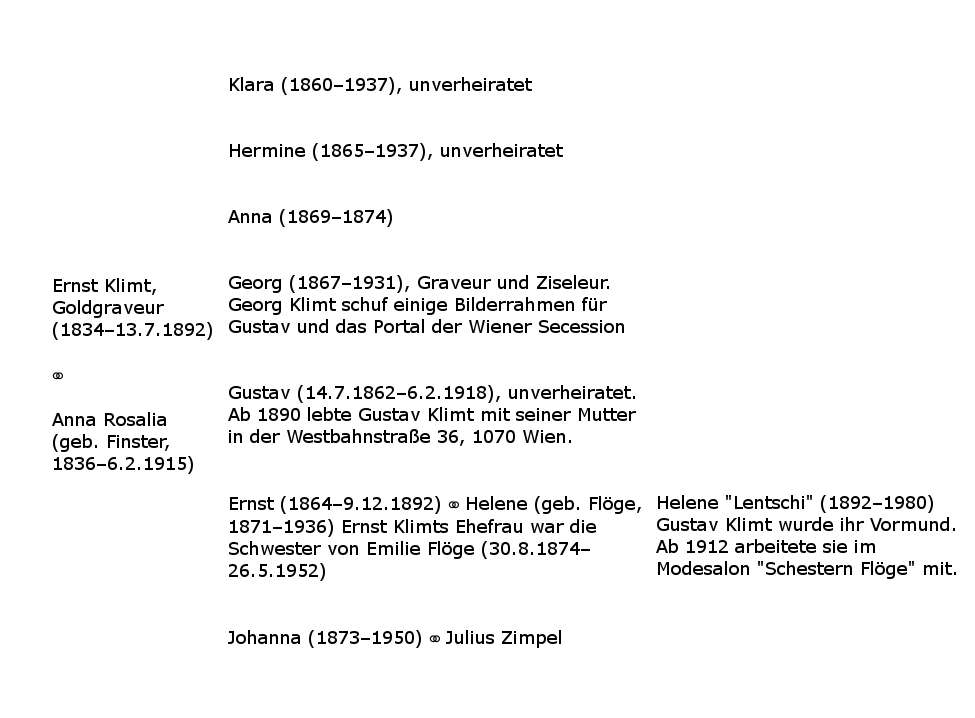