What is fold in structural geology

Geological structures are basically all three-dimensional properties of a rock. Often they are the result of powerful, tectonic forces that occur in the earth's crust. These forces can break or fold rocks. In the process, faults form or a mountain range is bulging. The repeated action or the combination of different forces creates very complex situations of structures for which a lot of experience is required to develop a coherent picture.

Structural geology deals with the study of the processes described and the effects on structures and rocks through the action of forces. The investigation ranges from the microscopic level to a global scale.

The structures can for example linear or planar be trained and can be relevant for construction projects or deposit science.

It should be noted that there are also borderline cases for which there is no uniform assignment. Here it is important to deal with suitable literature in detail. In addition, practical experience is essential here and can help you. If you do not have this yourself, it will certainly help to contact a lecturer.

There are three types of disruption related to the type of displacement: 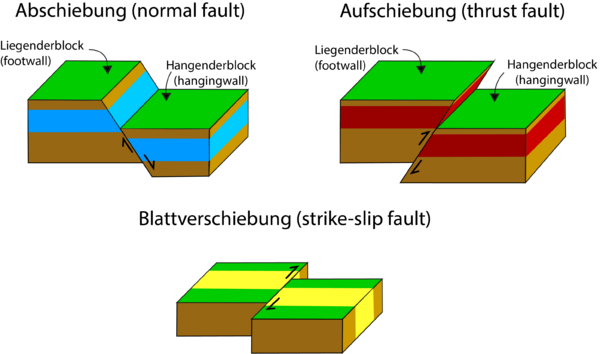 An example here is the rising of salt as a diapire, since salt can "flow" and has a lower density than the surrounding rock. (one speaks of holokinesis)

The geological structures described can be designed on different scales. Here you can see the rough division of scales as used in structural geology. Even within structural geology, the division of size ranges is not always exactly the same. When writing a report or a thesis, it is therefore particularly important to refer to the nomenclature according to which the terms are used and then to stick to this consistently.

The following classification of the scale is used in structural geology:

From the kinematic analysis of structures, conclusions can be drawn about the underlying tectonic movements. Then, based on the sequence of movements, the orientation of recent and historical regimes of forces and tension can be reconstructed.

Before starting the description, the following questions should be answered:

The recording of geological structures is basically similar to the general description of exploration. Here, too, you go from big to small. The drawing in the Field book, as well as the creation Geological photographs. In both the drawing and the photographs, one should always make sure to include a suitable scale (ruler, compass, field book, hammer, fellow students, etc.). After having obtained an initial overview, an overview sketch should be drawn up in which Later further details can be entered which one has observed from a smaller distance. Here you can later find the sampling points (see Geological sampling), if any were taken.

In all descriptions it is very important to note that in most cases an exposure is only a two-dimensional section of a three-dimensional structure. This can lead to illusions such as apparent Come to mind to lead. In order to determine how the existing rock units are stored, they can be measured with the aid of the structural compass (Swipe and drop). The more measurements you take, e.g. on a fold or fault, the more precisely you can describe its morphology later. For a clear description of where which measured value was taken, you should also create a detailed sketch of the structure in which the measured values ​​are entered. Individual details that are only available in certain places of the structure (e.g. internal folding, magma mixing / mingling, dikes, chilled margins, casts and flow marks, important fossils, etc.) can be recorded again with a separate sketch and their position in the Overview sketch can be entered.

The next thing to try is to determine which different rock units are present. For this one uses the common methods for Addressing rocks in the area and Rock description.

Pages of the category work in the field