Is there a royal family in Norway?

King Harald V has been King of Norway since 1991. The first heir to the throne is Crown Prince Hákon. The residence of the Norwegian royal family is the Royal Palace in Oslo (Det kongelige slott). 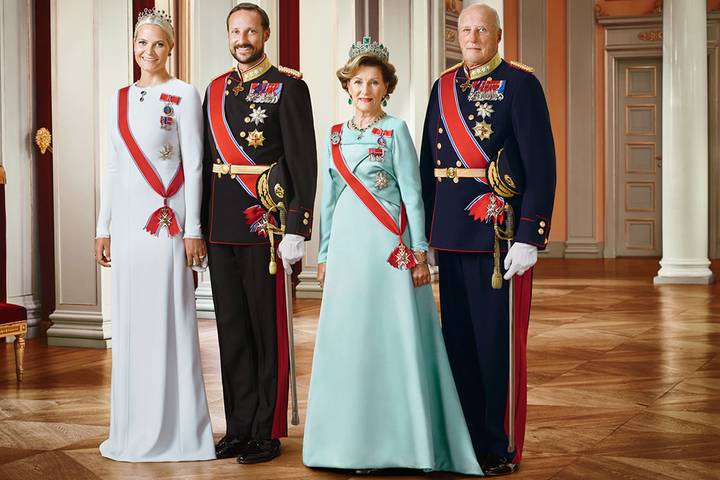 Since 1991, His Majesty (SM) King Harald the V has been ruling the Norwegians together with Her Majesty (IM) Queen Sonja. The Norwegian royal family also includes HRH Crown Prince Hákon and Princess Märtha Louise. Crown Prince Hákon is the heir to the throne of King Harald V. Together with Crown Princess Mette-Marit, he has two children who occupy positions two and three in the line of succession, "Her Royal Highness" (HRH) Ingrid Alexandra and Prince Sverre Magnus.

Princess Märtha Louise has three children with her ex-husband Arie Behn, Maud Angelica, Leah Isadora and Emma Tallulah Behn. By marrying Arie Behn, she renounced her IKH title and is only allowed to call herself a princess. The marriage was divorced in January 2017. On December 25, 2019, Ari Behn committed suicide.

Just like King Harald V, his children, Crown Prince Hákon and Princess Märtha Louise, were civilly married. This has caused some public disruption in Norway. In particular, the past of Crown Princess Mette-Marit and the books by Arie Behn were discussed in public for a long time.

Crown Princess Mette-Marit brought her son Marius with her from a previous relationship to her marriage to Hákon, which aroused great interest in the Norwegian and international public. Nevertheless, the Norwegian royal family is still very popular with the people.

The duties of the Norwegian king

The Norwegian royal family - like most royal families - primarily has representative duties. The king is at the same time the highest army commander and has generally enjoyed military training. The incumbent king can dismiss governments and appoint new ministers. He usually stays out of the day-to-day politics, but is kept up to date by the government.

So the king has - to compare it with German conditions - roughly the position that a Federal President holds in our country. He signs laws, is responsible for the amnesty and - as already mentioned - has above all representative duties. For example, he inaugurates new buildings, visits care facilities, schools, charitable institutions, opens museums, balls and much more.

The story of the Norwegian kings

The first known king of the Norwegians was Harald Harfagre, who lived from 870 to 933 AD. In 1389 the Kingdom of Norway became part of the reign of the Kingdom of Denmark. This was the case until 1814. Then Norway was transferred under the rule of Sweden, as the Norwegians had allied themselves with the Danes with Napoleon.

After its defeat, Norway came to the Kingdom of Sweden. In 1905 a vote was held that resulted in the independence of the Kingdom of Norway. Since the Norwegian royal family was completely extinct at that time, the Danish Prince Carl was appointed the new King of Norway. On November 18, 1905, he ascended the Norwegian throne as Håkon VII.