In 1957 the dog Laika was sent into space in a spaceship towards an unknown fate. Since then, we have continued to work on conquering space on Earth. The next destination is Mars, and some can't wait to enter the new desert landscape with an average temperature of -60 degrees.

The conquest of the galaxy is growing and the Plantronics headset manufacturers are part of it!

In the early 1960s, Plantronics headsets were already in use at NASA. For example when the American ground controller Major Tom had to be contacted. The close cooperation led to the fact that the headsets were installed directly in the spacecraft and astronauts were also equipped with them - from Mercury & Apollo to this day. Of course, it was a Plantronics headset that captured Neil Armstrong's legendary words as he took his first steps on the moon. 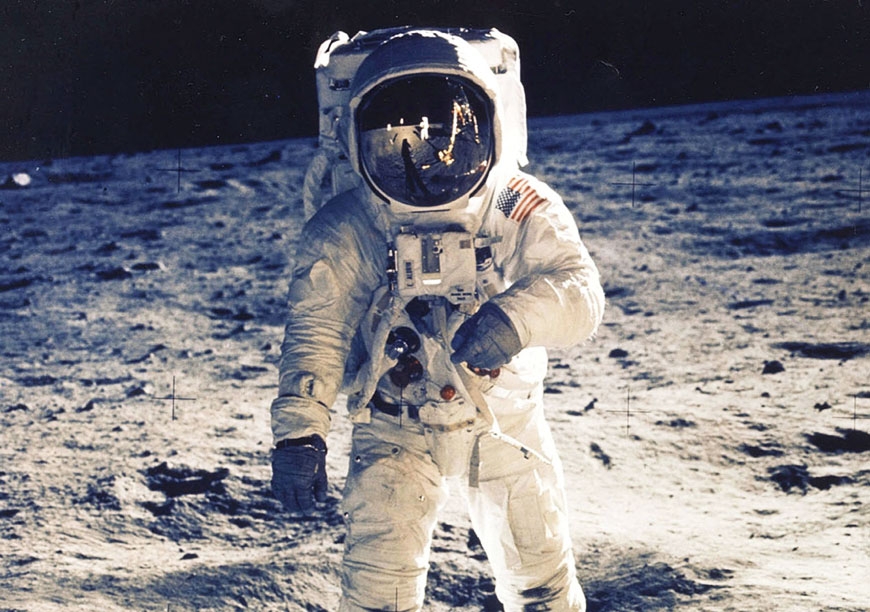 Neil Armstrong and Plantronics land on the moon on July 21, 1969. "That is a small step for man, a big step for mankind."

Headsets are not rocket science - we are very well aware of that. However, great strides have been made and much of the technology has been carried over from the moonscape to the office environment.

The latest is active noise cancellation, also known as ANC. The technology works like a defense shield, protecting your ears from harmful noise and interference in your environment. Just as astronauts don't want to be disturbed by the endless noise in space, we also want to escape the constant noise levels in large open offices on our planet.

How does the noise reduction work?

The passive noise suppression is done by soundproofing materials that protect your ears like an additional protective shield. For headphones, this means large earphones made of protective materials. Passive noise cancellation can effectively attenuate sudden and loud noises, such as from space, around you. But it is difficult to block out deep and constant intergalactic noise.

This is where the ANC technology comes into play - active noise reduction. The built-in microphone in the earphones can detect disturbing sounds and sends them to a so-called signal processor. A contrary sound wave is generated and played in the headset. The two opposing sound waves are combined into one wave, which balances out the interference signal and leads to the required silence. 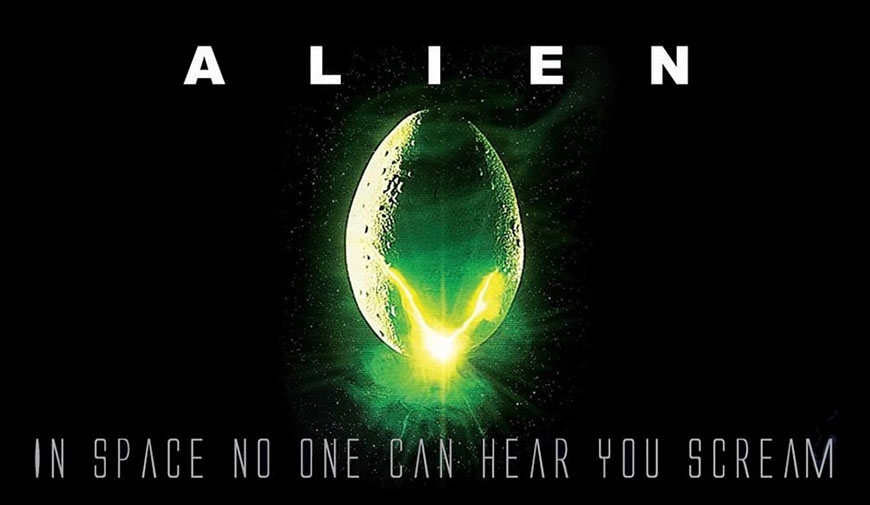 “In space no one can hear you scream” ... and with ANC technology, you don't have to hear someone else's scream either. From the movie - Alien (1979).

We are confident that many headsets will have built-in active noise cancellation in the near future. And Plantronics is right at the forefront and is already implementing the technology in your professional headsets for the office - also in the development of wireless technologies such as wireless headsets. Cordless headsets or noise-reducing headphones are becoming more and more important for consumers.

Plantronics recently launched a new headset series that replaces annoying cables with a stable Bluetooth connection while producing good sound in the headphones. The company has developed further and created the opportunity to combine work and leisure so that you can also listen to music with the communication headset.

If you want to experience really good sound while practically all background noise is blocked out, then we recommend you: Put the newcomer on and enjoy the comfortable and efficient Plantronics ANC headset.

We humans love freedom of choice and Plantronics has taken the decisive next step and integrated the new technologies into three different headsets: in-ear, on-ear and over-ear. We introduce them to you:

The big favorite in office flexibility is the Plantronics Voyager 6200 UC. It is one of the world's first wireless in-ear headsets and offers astonishingly good sound and really effective ANC. The four built-in microphones ensure perfect conversation quality and all noises around you are efficiently filtered out. The design is similar to a collar that you hang around your neck.

If you want to speak to a colleague immediately, you can switch on the Smart OpenMic, which interrupts all sound through the headphones, or you can simply take out the earplugs and let go. In this way, the headphones do not have to be removed and are always close to you. If you have incoming calls, the headset vibrates slightly in the neck - no more missed calls!

The Headste comes with full flexibility and has a chic and comfortable design. The headset works with both the PC and the mobile phone - you can also connect both devices at the same time.

Also read our previous post about the Plantronics Voyager 6200 here.

Or on the product page about the Plantronics Voyager 6200 UC here. 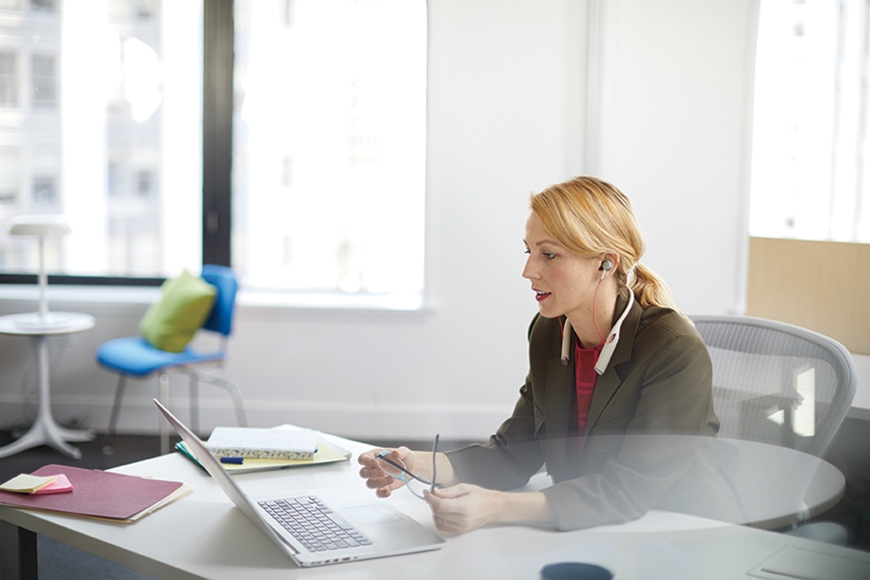 With the comfortable Plantronics Voyager 6200 UC you always know where your headset is. Whether you are focusing on conversation or multimedia, wearing just one earplug and observing your surroundings, or talking to your colleagues with both earplugs around your neck.

The Plantronics Voyager Focus is a comfortable on-ear ANC headset. It sits soft and stable on the head - without pressing on the ears. It's a bit smaller and more subtle than an over-ear headset, so it offers less passive noise cancellation. It is perfect for everyday office life if you want to concentrate on your computer and don't want to feel restricted. You can switch ANC on and off as you like - this headset also has the OpenMic function.

Do you want to use the headset mainly in the office? Enjoy great music while you do it. You will receive a Bluetooth dongle for your PC with a reliable range up to the coffee machine. At the same time you can establish a connection to the phone.

An unusual flexible headset that protects your ears from harmful sounds. Practical: the headset comes with a small travel bag.

Read more about the Plantronics Voyager Focus UC and buy it here. 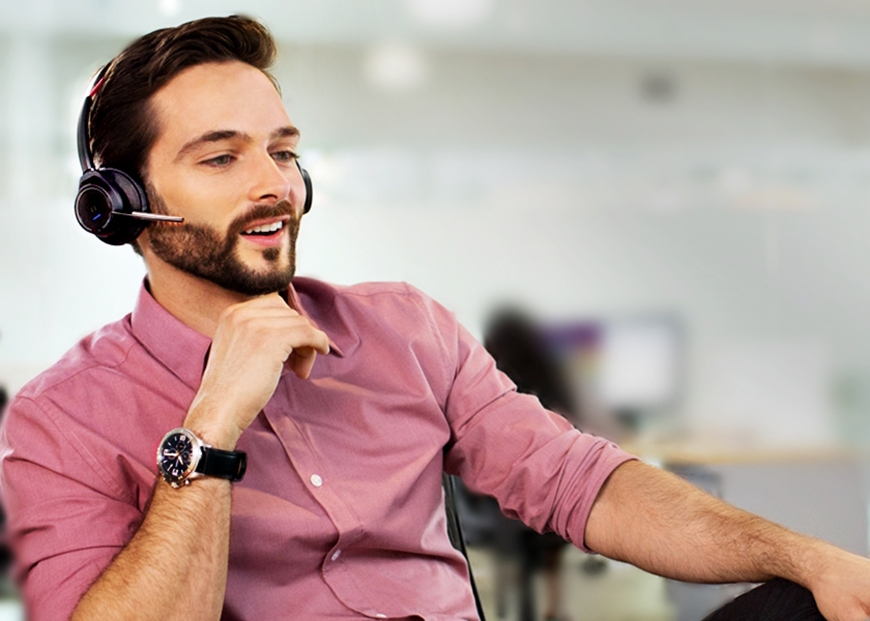 The Plantronics Voyager Focus UC sits comfortably on your ears and offers quality sound, while you keep an overview and still focus on your tasks.

The Plantronics Voyager 8200 UC is an over-ear headset that is perfect for you if you are constantly working on your computer and have to concentrate all day without having to worry about ambient noise. The effective passive noise reduction takes place through the large soft ear cushions and the active noise suppression removes the last harmful sounds. So you can always concentrate on your work.

Enjoy your own world and your favorite music without having to turn up the sound to maximum volume - very important to avoid hearing aids even in old age.

Of course, you can connect to your PC and your mobile phone at the same time - so you will never miss important calls again. The microphones are integrated in the ear cups to free you from microphone arms, cables and noises.

If your boss suddenly enters the office to ask for something, you can switch on the OpenMic with a simple push of a button, which switches off the music and captures the sound from outside through the microphones. They are available at the same time, but also not available. A form of signal that even the manager understands.

Read more about and buy the Plantronics Voyager 8200 UC here. 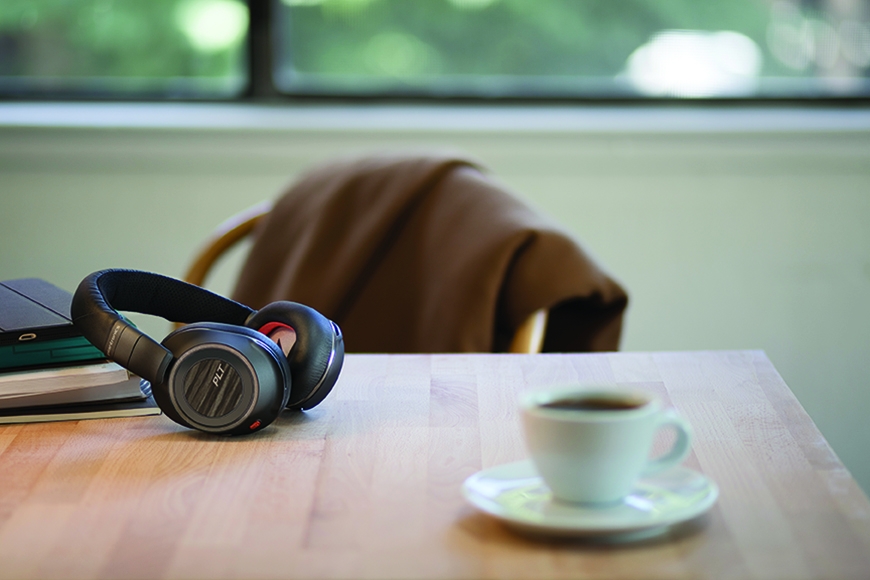 The Plantronics Voyager 8200 is a soft over-ear headset that beams you into your own universe. Switch on your surroundings with just one push of a button. No cables, no visible microphones. Just you and the great sound.

With one of these three models, in-, on- or over-ear, you can create your own universe in the office. You can concentrate fully whenever you want - calls can be answered with perfect quality!

Want to learn more about Plantronics? We give you a brief overview here