Why is MIDI used

MIDI sequencer: what is it?

If you want to create your own beats in the sequencer, you need either a compact groove box or the right music program, such as a sequencer. In this article you will learn how MIDI and audio interact and how an instrumental is created from them in the end. So you can understand how the rhythms get from your fingers via a controller into the computer and are transformed into sounds there. 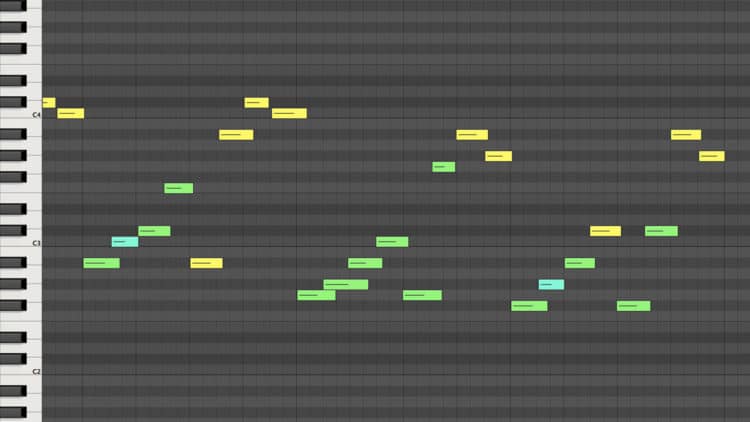 Behind MIDI ("Musical Instrument Digital Interface") is the basic standard for the digital data exchange between musical equipment that has remained unchanged for a good 30 years (!). The interface is maintained by the MIDI Manufacturers Association (MMA). All official MIDI standards are jointly developed and published by the MMA in Los Angeles and the MIDI Committee of the Association of Musical Electronics Industry (AMEI) in Tokyo. In 2016, the MMA founded the MIDI Association (TMA) to support a global community of people who work, play, or create with MIDI.

You can think of the MIDI protocol as a separate language with which devices and programs communicate and in which the MIDI data is to be transmitted. From synthesizers and music software of all kinds to modern DJ controllers, the overwhelming majority of hardware and software still use this system.

Use and understand MIDI sequencers

With the »Note On«, a device or software instructs the receiving sound generator to play a tone. »Note Off« again sends the command that the sound should no longer be played. This indicates the length of the note played. The second piece of information, always linked to Note On / Off, identifies the pitch. After all, the MIDI receiver has to know which note is to be played or stopped in which octave.

The third important piece of information is the hardness of the touch ("Velocity"). A value from 1 to 127 is sent because a resolution of 128 steps (including 0) is available for all MIDI values.

MIDI files (standard extension ».MID«) can contain entire songs with multiple tracks and are stored digitally. Archiving, sending and exchanging between devices or music programs is easy due to their low memory requirements.

How do MIDI data get into the computer?

The most common scenario: MIDI data is sent from a controller to the computer. A MIDI input on the audio interface is required for this, if the controller does not provide it itself.

MIDI keyboards with keyboards are the classic input tool. In principle, the same thing happens with the pads from MPC, Maschine and Co. In the standard setting, each key or drum pad is assigned its own MIDI note. Note on / off messages on the corresponding MIDI note are sent by keystrokes. The MIDI receiver, for example the virtual instrument, is instructed to play back one or more audio samples that were previously assigned to this MIDI note (the pad). This can be implemented in variable volume depending on the hardness of the attack.

In order for MIDI control signals to get into the computer, they must be transmitted by cable; there are also more exotic radio solutions. In the past, only the five-pin DIN cables were used to connect to the corresponding sockets (the left of the two large connections in the picture on the right), whereas today MIDI is transmitted more and more often via USB. It is not uncommon for the manufacturer to go so far as to forego the traditional type of connection and instead use only USB.

What is a sequencer

A sequencer is a device or music program that you can use to create rhythms and entire songs. These sequences, which are divided into clock steps, are played back at a fixed speed. A sequencer alone does not emit any sounds, it is just a container in which all MIDI information is stored. The rhythms and melodies (MIDI information) are only set to music by sound generators (instruments).

Sequencers come in the form of hardware or software

The term sequencer is used very inconsistently - either for 1.) dedicated hardware, 2.) dedicated software or 3.) just a function of certain programs or devices.

On the one hand there are sound generators with an integrated sequencer, on the other hand there are independent devices that only store the rhythms. In the early days, hardware sequencers used an analog control voltage ("CV" for "control voltage") to transmit the note information. Since the early 1980s, these have been increasingly replaced by MIDI. Today there are devices that master both methods, such as the following device. 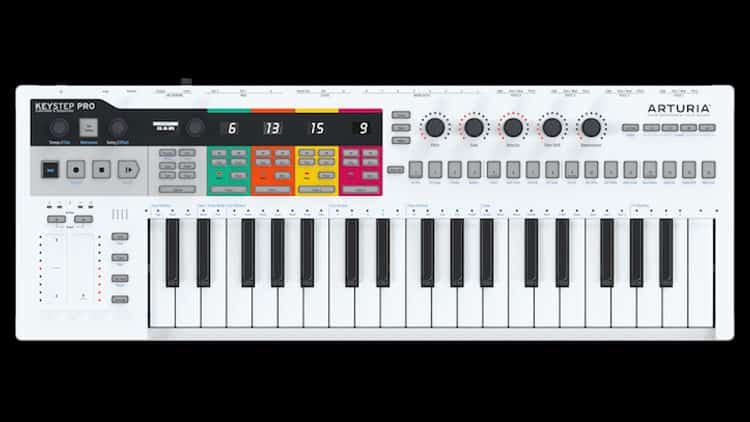 The Arturia KeyStep Pro is a MIDI controller and multi-channel polyphonic sequencer for the home studio.

The Arturia KeyStep Pro is an exemplary representative of its genre. It functions as a compact key controller for software instruments via USB or as a hardware expander via USB and MIDI or for analog devices via Control Voltage.

In the recent past, software sequencers have enjoyed enormous popularity thanks to their ease of use thanks to the mouse and large screen. The sequencing of songs and rhythms takes place here mainly in the so-called piano roll, in which notes are displayed in the form of bars on a keyboard.

The MIDI notes are displayed vertically in semitone steps, while the time bar extends horizontally in a grid for the beats of the set time signature. In contrast to a simple step sequencer, there are options here for the complex development of rhythms and melodies. For example, any length and overlapping notes, chords, progression curves for volume or effect parameters, flowing tempo changes, time changes and much more.

Modern software sequencers can not only process MIDI data. They also offer alternative views for editing, their own sound generator (virtual instruments) and take on the tasks of a classic tape machine for recording, playing back and editing audio.

A popular sub-type of sequencer in beat making is the so-called step sequencer. In this case, the programmable area is mostly divided into 4/4 time and correspondingly 16 steps. The input options for this type of hardware or software are somewhat clearer, which is what makes the production of electronic music so special. In Techno, Trance and House, for example, the bass drum is set to every 1st beat (i.e. steps 1, 5, 9 and 13) and the hihat to every 3rd beat (steps 3, 7, 11 and 15).

To set MIDI data from your software sequencer to music, you need sound generators that come either in the form of external hardware (independent MPC, drum machine, hardware sampler, etc.) or virtual instruments (plugins or independent programs). As far as software solutions are concerned, the flexibility and tonal possibilities are now very tempting, a selection and further information can be found in our Beat Maker section.

The output of the relevant MIDI track is assigned ("routed") to a tone generator, then it sends all MIDI notes to it. The sound generator then turns the control commands into audible tones.

MIDI to audio: hardware vs. software

Plugins and virtual instruments can be integrated into your tracks directly on the computer without the sound first having to be digitized and recorded via the audio interface, i.e. MIDI. In addition, the sounds and settings are saved as part of a project; In contrast, with many external sound generators, you have to reconstruct all control and switch positions by hand. Not to forget that plugins are usually much cheaper than hardware with a comparable range of functions.

If the melodies and rhythms from your software sequencer are to be reproduced by an external sound generator, then the MIDI data must be extracted from the computer using appropriate cabling.

To do this, the physical MIDI output on your audio computer (usually on the sound card) is first connected to the MIDI input on the sound generator via a cable. The MIDI track in the software is routed to the card's MIDI output. You should then hear the notes from the external device. More about this in the info box on the right.

But don't forget to connect the audio output of the external hardware to your monitor, otherwise you won't be able to hear anything.

Conclusion: What else to say about MIDI & sequencers

Perhaps you are asking yourself the question: “Why can't I just connect the audio signals from all my devices and do without a digital interface? Isn't that easier? "

The bottom line is that recording only audio tracks is very limited compared to a well-edited MIDI setup.
The real strength of the interface is that it allows you to continuously edit sounds and performance without having to play the part again.

Don't you like the piano sound that much? Then just create a new one. Have you changed your mind about the chord progression? Edit the MIDI sequence again and trigger the sound again. These are just a few of the ways MIDI can aid your workflow.

Even the simplest MIDI loops can be expanded into a full multi-track session in no time at all. The interface gives you access to every sound you need for your track and all the editing power you need to make your workflow fast and smooth
Put simply, MIDI helps you perform better and in less time.

Now you have got to know the power of MIDI and can start right away in your own home studio and try out the interface.