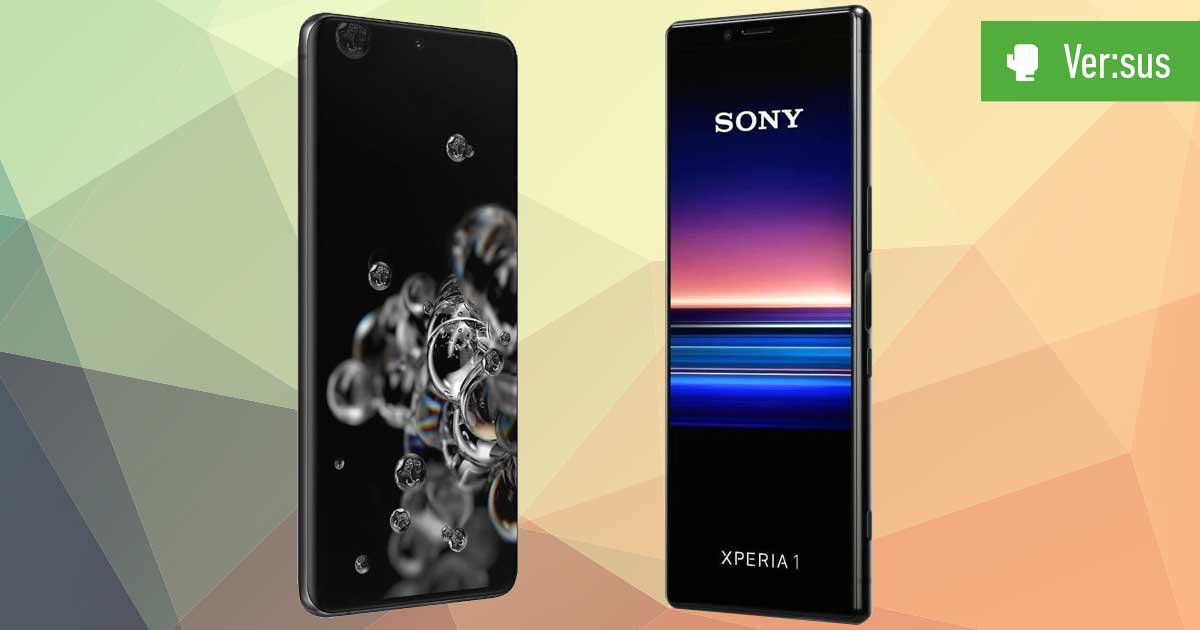 MWC 2020 is canceled due to the coronavirus. Sony makes a virtue out of necessity and publishes its new flagship series without much media fuss. This includes the 5G mobile phone Xperia 1 II, which aims to compete with the best smartphones in 2020. We looked at the specs and compared them with Samsung's premium flagship: Sony Xperia 1 II vs. Samsung Galaxy S20 Ultra 5G.

Sony unobtrusively presents its flagship smartphone 2020. The Sony Xperia 1 II has it technically, but also in terms of price. The flagship not only breaks the 1,000 euro mark, but also - at least on paper - one or the other benchmark in terms of video and display. We'll show you here whether it can keep up with Samsung's flagship cell phone. Sony Xperia 1 II vs. Samsung Galaxy S20 Ultra 5G: the comparison.

In terms of design, Sony's Xperia series stands out from the competition from Apple, Huawei, Samsung and Co. Because the Japanese apparently subscribe to the motto with their flagship series: long and wide. After all, the new Xperia 1 II comes with a 6.5-inch OLED display in 21: 9 format, which, together with the spectacular 4K resolution, creates a cinema feeling. The noble smartphone from Sony offers a total of 3,840 x 1,644 pixels; not even the flagship model of the S20 series can keep up with this.

The Samsung Galaxy S20 Ultra 5G is equipped with a 6.9-inch AMOLED display, which "only" has a resolution of 3,200 x 1,440 pixels. A remarkable value in itself, which is nevertheless trumped by Sony's high-resolution cinema phone. Samsung's flagship scores with a refresh rate of 120 Hz, which ensures that image transitions look particularly smooth. Sony, however, relies on a frame rate of 60 Hz, but equips the Xperia 1 II with motion blur reduction, which, according to the manufacturer, makes image transitions particularly smooth. Practice will show whether this succeeds. Nevertheless, Sony is convincing - image repetition or not - in terms of display all along the line and has the extravagance bonus, so the first comparison is in favor of the Xperia 1 II.

If you look at cell phone performance these days, there's no getting around Samsung's flagships. In terms of processor performance, the South Koreans set standards every year against which the competition has to be measured. According to the data sheets, Samsung also seems to have achieved a feat with the Galaxy S20 series, because the new Exynos 990 SoC is installed in the 2020 models. The chip is manufactured using the 7 nm process, has eight cores and a clock frequency of up to 2.73 GHz. The current flagship processor is based on a tri-cluster CPU concept consisting of a Cortex-A55 quad-core, a Cortex-A76 dual-core and a new custom dual-core cluster. In addition, there is Android 10 and a working memory of either 12 GB or 16 GB. According to Samsung, this configuration promises a 20 percent increase in performance compared to the previous chip. Benchmark tests will show whether this is the truth. Either way, it looks pretty damn good on paper.

The interior of the Sony Xperia 1 II is not to be sniffed at either. Because in the new flagship of the Japanese the Snapdragon 865 clocks, which currently leads the Antutu benchmark list for Android devices. However, it remains to be seen whether it will stay that way after the testers took a close look at Samsung's Exynos 990 SoC. Benchmark or not: The Snapdragon 865 is a real high performance. A fast Prime Core with up to 2.84 GHz, three fast Cortex-A77 performance cores with up to 2.42 GHz and 4 ARM Cortex-A55 cores ensure smooth processes, turbo speed and considerable energy efficiency. You have 8 GB of RAM and Android 10 at your side.

It is currently difficult to say who is ahead of the game, but one thing is certain: Both the Sony Xperia 1 II and the Samsung Galaxy S20 Ultra 5G are high performers who will more than satisfy their users in terms of performance.

When it comes to stamina, Samsung clearly has the upper hand. The 5,000 mAh battery of the Galaxy S20 Ultra 5G, in conjunction with the energy-saving Exynos 990 SoC, ensures excellent runtimes. Thus, the Samsung flagship will probably last up to two days with average usage behavior. The Xperia 1 II is equipped with a 4,000 mAh battery, which despite all the energy efficiency of the processor is probably a bit weaker.

When asked about the internal memory, the South Koreans give users a choice between 128 GB and 512 GB. Sony is more cautious here and only offers the Xperia 1 II in a 256 GB version. However, both smartphones can be expanded externally by up to 1 TB, so that no future owner will have to struggle with storage problems.

With the Galaxy S20 Ultra 5G, Samsung has introduced a quad camera that has a 108-megapixel wide-angle sensor and not only impresses all testers, but also sets new standards in smartphone photography. There is also a 48-megapixel telephoto and a 12-megapixel ultra-wide-angle sensor and a ToF camera for portraits with an improved bokeh effect. Thanks to the complex periscope lens, the telesensor zooms in 4x optically, and digitally, a 100x zoom is even possible. With this equipment, the Galaxy S20 Ultra 5G shoots high-class photos in professional manier in all conditions.

However, Sony is considered a camera specialist. Therefore, the manufacturer does nothing and works with the German lens expert Zeiss for the Xperia 1 II. This makes the device the first smartphone to carry a Zeiss “T” seal of approval. The latter stands for a special lens coating that is supposed to help reduce reflection and scattering. Apart from that, the camera equipment of the Xperia 1 II is rather conservatively equipped. A triple cam with three 12 megapixel sensors (wide-angle, ultra-wide-angle and telephoto) is installed on the back of the mobile phone. An additional ToF sensor provides the bokeh effect. The equipment is of high quality without question, but whether it can keep up with Samsung's S20 Ultra 5G in the practical test remains questionable. The same applies to the selfie camera: Here, 40 megapixels (Samsung) and 8 megapixels (Sony) face each other.

Both 5G smartphones are among the all-rounders in the high-end segment. Looking at the data sheets, the S20 Ultra 5G has the lead in the overall ranking, even if the title of the display king goes to Sony's flagship. Samsung's advantages also come at a price. So if you want to save some money and mainly use the phone for streaming, the new Sony Xperia 1 II is more than good for you. The rest of them are using the best android and photo emperor currently, the S20 Ultra 5G, with a clear conscience.