A photo that was taken sometime between 1910 and 1930: the Dutch photographer Thilly Weissenborn takes a photo of her brother Theo. It needs a lot of light so that something can be seen in the photo.

The word photography comes from the Greek language and means "writing with light". In photography, you take pictures by capturing light with a device. The device is called a camera or photo camera, the images are called photos. If you take a picture, you take a picture. Photographer is also a profession. Most photos today are taken with the tiny cameras built into smartphones.

When taking photos, two things happen: the light is captured and it is stored. When capturing, a camera works in a similar way to our eye: the light hits the lens of the eye, the lens makes the light rays narrower, and the bundle of light then falls on the retina in the back of our eye.

With the camera, the bundled light falls through a lens onto a film or onto a light-sensitive disc, the sensor. It stores the light and then turns it into a photo. A lens consists of one or - mostly - several lenses.

How were photos taken in the beginning? 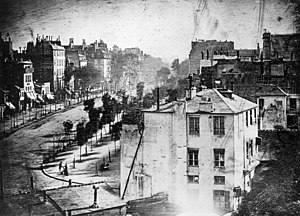 The photographer Louis Daguerre took this picture in Paris in 1838. A shoe shiner and his customer can be seen at the bottom left on the street corner.

Photography was invented around 1840. Back then, a liquid substance that was sensitive to light was smeared on paper or a glass plate. When light fell on a place, the place became darker. In the beginning it took several hours to take a picture. Slowly, however, the photo material got better and better, but people had to stand still for minutes for a photo to become something. Around 1900 there were cameras that were small enough to be taken with you and photographic material that was so sensitive that you could take snapshots. These are photos without much preparation, just like that on the street.

First, the photosensitive material was smeared on a pane of glass. The pane of glass was put in a box, the camera. "Camera" is Italian and means "room". Then the photographer briefly opened a hole on the other side of the camera and light fell on the glass plate. That's how you took good, big photos, but the glass plate was also big, heavy, and fragile. At the beginning you couldn't duplicate a photo: The one picture that the photographer had in the “box” was the only one.

How does a camera work with film? 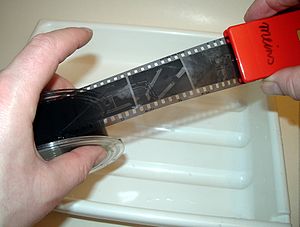 In the years after 1900 the film was invented. It was initially light-sensitive cardboard, later a plastic strip. “Film” was actually the thin, light-sensitive material on the surface. The film, the plastic strip, was rolled up and was in a small box, a cassette. This was put into the camera. When you had taken a photo, you turned a lever on the camera. This pulled the film so much that you came to a new position. Then you took a new photo, exposing this new spot. The longer a film was, the more photos it could fit, for example 36.

The film cassette was then taken to a photo studio. The photo studio “developed” the film into a negative: it dipped it in a liquid that ensured that it would not change with new light. The customer not only received the negative, but also prints. This is what the actual photos are called. If he later wanted more prints of photos that he liked, he went back to the photo studio with the negative.

But there were always people who developed their own films. In addition, they had a room in their apartment that was very dark, the darkroom. There was only a weak, special light in it: normal light would have changed the still light-sensitive film as soon as it was taken out of the camera or film cassette. A darkroom was set up by people who took a lot of photos. Developing it yourself was cheaper than the photo studio. In addition, they could change something themselves: make the photo lighter or darker, select a section and so on.

Over time, the cameras got better and better. For example, the auto focus was added. Focusing means focusing, so a camera with autofocus can ensure that an image is sharp even at the push of a button. Color film has been on sale since around 1930. But even around 1970 most photos were only black and white because color film cost more.

What can a digital camera do? 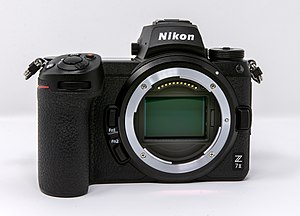 A digital camera records light with a sensor. This is the rectangle that you can see through the round lens hole.

The first digital cameras were built in the years after 1990. With a camera like this, the light no longer falls on film, but on a sensor. This is a device that converts light into computer signals. The photo is then digital: it consists of data that a computer can handle. A photo file can be processed and distributed in the same way as other computer files.

The great advantage of digital cameras is that you no longer have to buy and develop film. As a result, the individual photo costs you next to nothing. However, the first digital cameras were still very expensive and the photos were not very good. If you enlarged them, you could quickly see the dots that make them up. It wasn't until around 2004 that digital photos became better than film photos. Since then, almost nobody has bought a camera with film anymore.

Digital photos are much easier to change than photos used to be. With an image processing program on the computer you can make photos lighter or darker, change colors, cut something out or merge images. Some people no longer believe what they see in a photo because it could have been changed. However, it was previously possible to falsify something on a negative. But of course it is now easier than in the past to forge a photo and use it to show something that doesn't even exist.

What do you need photos for?

If you wanted a picture of something or someone, it had to be painted or drawn. That changed with photography. After a while you learned to reproduce photos, even in a newspaper. Until then, people mostly had no idea what their king or a popular writer looked like. But people also liked to have photos taken of themselves and their relatives. Before that, most people didn't even know what their grandparents looked like when they were kids, because painting was much more expensive.

All kinds of scientists and explorers have also taken photos for their work. The photographer William Henry Jackson traveled through the Yellowstone area of ​​North America around 1870. His photos made people enthusiastic about the nature there. This contributed to the Yellowstone area being declared a national park. In a national park, plants and animals are protected, you are not allowed to just hunt there.

There were and are journalists and politicians who want to show how badly the poor live. Reporters took photos of wars. So the newspaper readers could see what it really looks like there.

Since around 1930, magazines with an extra large number of photos, so-called magazines, were known. Especially since digital cameras have existed, many, many photos are taken every day. One even speaks of a flood of images.